Forgive me readers, for I have sinned; it has been over a month since I have posted anything about my Condor Scenery Adventure.  Most of that month was spent either getting ready for our first RL contest of the year – the 2013 Seniors Championship at Seminole Gliderport in Florida USA or actually flying in it.  The contest itself was quite fun, and my team-flying partner John Mittell (BZ) and I did pretty well, especially BZ with an 11th place overall out of 54 contestants.

Anyway, I got back up here to Columbus Ohio just in time to ‘enjoy’ some late-season winter weather, so I have had some time to get back to the ‘adventure’.  When I left off last month – see Day 18, I had figured out how to add forest areas to the map in Terragen for one tile, but not how to use TerragenForCondor to automate the process for all 110 tiles.  As it turns out, I never did figure this part out, even with TFC’s author Hitzi’s help.  When I left for Florida, Hitzi had been able to duplicate the problem at his end, but AFAIK, never did come up with a solution (my apologies in advance if I have this wrong).  In an attempt to work around the problem myself, I even went so far as to try and automate it myself using a cool window-scripting program called ‘AutoIt’, which allows automation of windows control buttons, mouse clicks, and text retrieval/input for most windows-based programs.  Unfortunately it turned out that Terragen is *not* your grandmother’s windows program, and seems to have been written by a group of crazed monks from Transylvania – it has windows that aren’t really windows and aren’t really children of the main window, and controls that aren’t really controls and don’t really belong to their ‘parent’ windows – ugh!  So, after spending about 100 times as much time trying to automate the task as it would have taken to do all 110 tiles manually, I finally gave up and did all 110 tiles manually, at about 1 minute/tile.  After 2-3 hours of point-click-point-click-point-click…. repeat, I was done. ;-).  In the end, I had a complete 110-tile scenery map with forest areas distributed properly, and all was visible in Condor.

The next task was to do something about airports.  My sole airport at CCSC was pretty uninteresting – the only thing there was a windsock; no runway, no hangars, nothing but a windsock and some trees.  I noodled around for a while in the Condor forums, and finally ran across a thread where someone mentioned the need to select ‘use generic files’ to get the default airport infrastructure.  Once I did that, saved the landscape, and then tested it in Condor, I had an honest-to-god airport – yay. 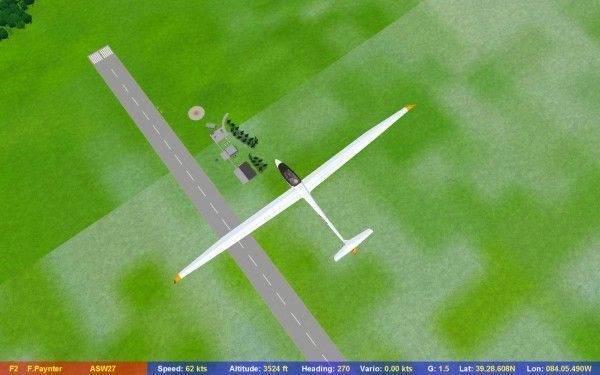 CCSC airport with hangars and a runway – woo hoo!

The next great adventure was to add some more airports to my scenery, besides the single one at CCSC.   I thought this should be a piece of cake – how hard could it be to add a few more airports?  Well, as it turned out – VERY HARD!!  I added 5 more airports using the Landscape Editor, entering the geographic locations, height, and direction of each – so far, so good.  Then I saved the landscape and exported the textures to DDS, and exported the flightplanner map.  When I then tested the new setup in Condor, I got a double shock; first, my carefully constructed SeeYou capture flightplanner map (see Day 13)  was no longer there in the flightplanner – it had been replaced by the landscape from LE – bummer!  Secondly, the new airports now showed up in the flight planner map, and could be used for tasking, but none of the new airports were visible in Condor itself – only the windsock was visible – WTF?

Back to LE; the airport rectangles showed up in the right places in the LE display.  Oops – screwed up the elevations (I had unfortunately used feet for elevation, not meters), so I fixed that, but still no airports in Condor.  OK, maybe it was because I hadn’t flattened the airports sufficiently?  I went back into LE, and flattened a couple of the airport areas, thinking that might be the problem, and then saved the landscape (well, I *thought* I had saved the landscape – see the next part), then closed LE and opened Condor to see the results, and…. ACKK!! Condor crashed!  Back to LE, and…. ACKK! ACKK! now LE won’t load the CaesarCreek scenery  – it just shows me the hourglass icon for a second or two and then – nothing!  Oh, man, what a downer – I have been working on this now for the better part of a year, and it looked like I had just lost it all, ARGGHHHH!!!

As usual when faced with a difficult situation, I did what I always do – yell for help! ;-).  This took the form of two separate threads on the Condor forum – one dealing with the Condor/LE crash problem, and the other dealing with my inability to get airports to appear properly (somewhat moot at this point, as the loss of airports was the least of my problems!).  And, as usual, my fellow Condor-ites responded with helpful and pertinent suggestions. In this particular case, however, the best responder by far was David Regula who simply said “call me and I’ll talk you through the troubleshooting steps”.  A few minutes on the phone with Condor scenery-meister Dave, and he determined that the culprit was a corrupted CaesarCreek.TRN file, most probably corrupted by me killing LE before the ‘Landscape Save’ procedure was finished after the ‘flatten’ operation (which Dave explained greatly extends the ‘save’ time).

Fortunately, I saved my original .TRN file to a completely separate folder back in July when I was first starting out (it’s not paranoia if they really *are* out to get you!), and so I was able to replace the corrupted file with a good one and I was soon back in business – at least in LE.  When I tried Condor again, it didn’t crash, but it didn’t load properly either, but Dave (thank you again!) explained that this was normal if there aren’t any airports in the landscape – you must have at least one, and all mine had gone bye-bye with the corrupted .TRN file 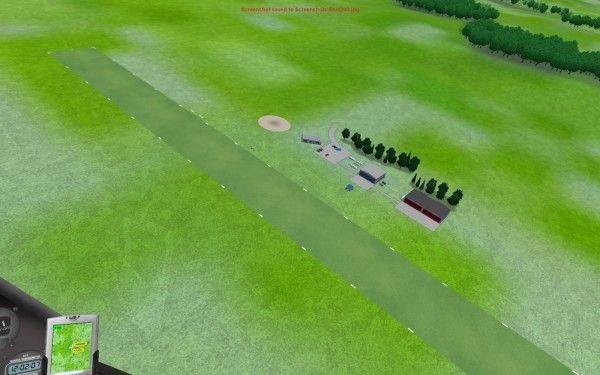 So, I’m officially back in business, thanks again to all of you folks in Condor-land who have been so gracious with your time and support (especially you Dave!).

Next up – get the other airports installed and flattened properly, and then make another try at restoring my missing SeeYou screenshot flightplanner map.  Right now, however, I’m off to fly the USNS (U.S. Nightly Soaring) race at Moriarty, NM ;-)