In ‘Day 21’ I had managed to use a SeeYou capture of my CCSC area as a ‘culture’ overlay to the CCSC scenery, but I quickly found that there were a couple of very significant problems.  One problem was the presence of very large, ugly gray lines, which I later determined to be latitude/longitude lines on the SeeYou map. It’s an interesting exercise in human cognition that I have never even noticed these lines in all the years I have been using SeeYou (I mean, they were there, and I saw them, but just never thought them to be ‘out of place’), but as soon as I used this image in a different context (i.e. as a map of ‘real’ terrain in Condor), the gray lines became obvious artificial constructs that didn’t belong (and what does ‘artificial construct’ mean in the context of a computer simulator, anyway?).  The second problem was much more serious, in that the map visible out the canopy wasn’t well synched with the moving map display in the ‘in game’ PDA.  In other words, when the PDA showed me over a particular road, I was several miles away from that road when I looked out the canopy.

So, I resolved to fix both these problems by regenerating the PDA map, which is derived from appropriately sized BMP images in the top-level CaesarCreek landscape folder (i.e. C:\Program Files\Condor\Landscapes\CaesarCreek).  To do this, I started with the 5632 x 5120 pixel SeeYou capture from yesterday (which I had very carefully generated using the lat/lon coordinates for the upper-left and lower-right scenery coordinates as displayed in Landscape Editor), and downsized it in Photoshop by a factor of two to 2816 x 2560 to match the size of CaesarCreek.BMP in the CaesarCreek Landscape folder, and replaced the current CaesarCreek.BMP file with the new one.  Then I tested the result by flying the scenery in Condor, with the results shown below. 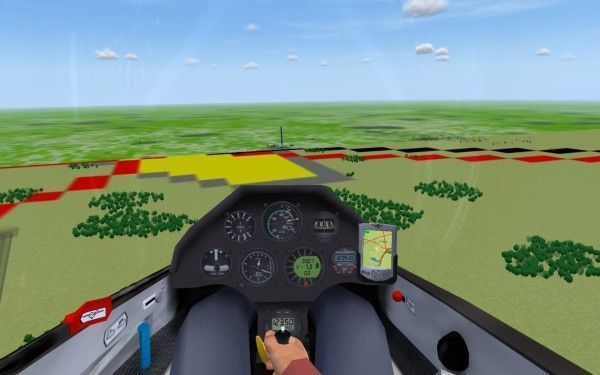 Approaching Wilmington from the west. 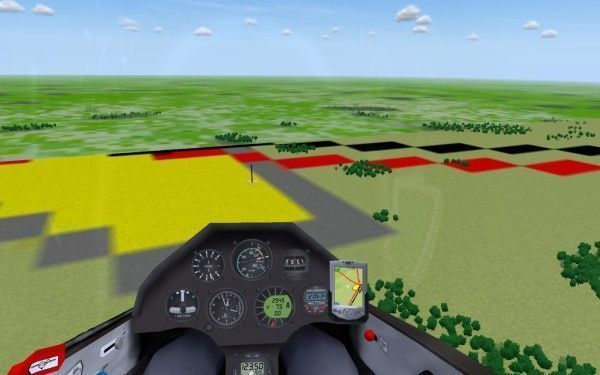 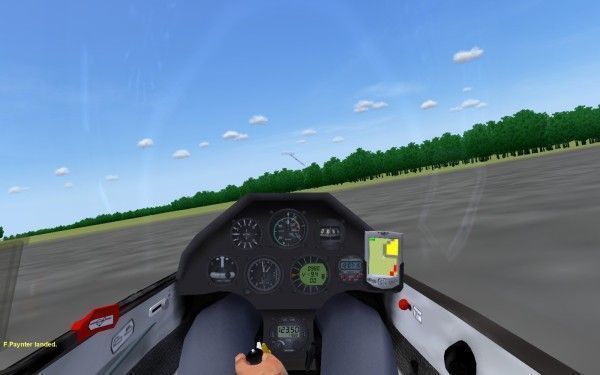 Sitting on the southwest corner of the Wilmington town area. Note the correspondence between the view out the canopy and the PDA map

At this point, the Caesar Creek project is starting to look like a real scenery.  It has trees (not necessarily all in the right places, but…), roads, rivers, and lakes, albeit at a stunningly coarse resolution.  Of course, the ‘culture’ overlay currently only applies to just tile 0302, but that is easily addressable with another couple of hours of drudgery (or maybe another Photoshop script?).  At that point, I might actually have something that my club-mates and I can fly, what a concept.

I have to say at this point that my dread of becoming entangled with Photoshop was more than a little overblown, as PS has turned out to be a very easy tool to use, and it seems pretty smooth and fast on my Dell Precision M6300 laptop.  Probably some of my reluctance to jump into this pool was caused by my memories of Photoshop workers dying in droves back in the 80’s while waiting for a rendering operation on a 1024 x 1024 BMP to complete, on the then ‘hot’ PC’s ;-).   In any case, “mea culpa” for all the bad words and vibes directed toward Photoshop!

Next up – I’m going to try to generate a Photoshop script to automate the process of merging my SeeYou capture slices with the corresponding Terragen tiles.  Stay tuned!