At the conclusion of Day 22, I had managed to fix some mapping problems, and demonstrated that I could correctly overlay a portion of my SeeYou culture map onto the corresponding Terragen tile.  At the conclusion of that post I wondered whether or not I might be able to construct a PhotoShop script to do the overlay operation for the remaining 109 tiles.  The operation would have to merge a terragen tile image XXXX.bmp with the corresponding SeeYou map section tXXXX.bmp generated previously in Day 21.

So, I spent some quality time learning JScript and getting used to PhotoShop’s ExtendScript Toolkit (EST).  EST is *supposed* to be a complete IDE for creating JScript programs for PS, but it actually lacks a couple of minor features – like quality and completeness.  Unfortunately, its lack of quality and completeness is slightly overbalanced by its integration into PS, so I basically had to hold my nose and suffer.  There are lots of great program editors out there, but none of them allow the ‘ease’ of debugging that EST does.  Apparently the PS guys got EST about 3/4 baked 10-15 years ago and then forgot it; EST would be wonderful open-source product now, but I digress ;-).

Anyway, I had some fun coming up with a decent script (‘condor-overlay3.jsx’, available from my Google Drive site here), and then used it to do a merge of all 110 terragen tiles with the corresponding SeeYou map slices.  Here’s the header information from the script:

//Plan
// Step1: Get the Overlay file source folder and file prefix
// Step2: Get the Terragen file source folder
// Step3: Get the Output file destination folder (must be distinct)
// Step4: For each source file in the Overlay folder:
// a: Open a ‘[overlayprefix]XXXX.bmp’ file from OverlayFolder in PS
// b: Open the corresponding ‘XXXX.bmp’ file from TerragenFolder in PS
// c: Select the entire contents of step 2 and paste as new layer in Step 1 file
// d: Set pasted layer to [opacityval] percent opaqueness
// e: ‘Flatten’ image and save to OutputFolder as ‘XXXX.bmp’
// f: Close the source files

After running the script using a  opacity value of 50%, I wound up with 110 merged files in my output folder.  Then (because I’m paranoid), I first copied my entire CaesarCreek\Working\Terragen file to a safe place, and then overwrote the original Terragen tiles with the merged versions.  When I imported the tiles into Landscape Editor (LE), I got the following: 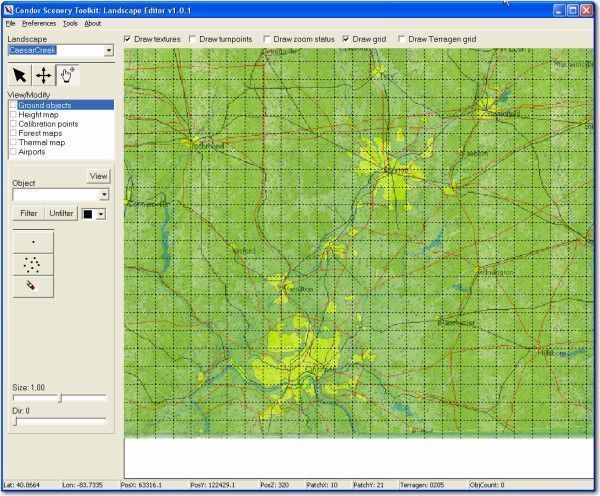 This looked just a bit *too* transparent, so I tried again (now that I have a script I can do this in about 2 minutes – yeah!) with opacity set to 30
% instead (the opacity setting is for the terragen tile layer, so lower opacity means the SeeYou map becomes more prominent).  With 30% opacity, I got the following: 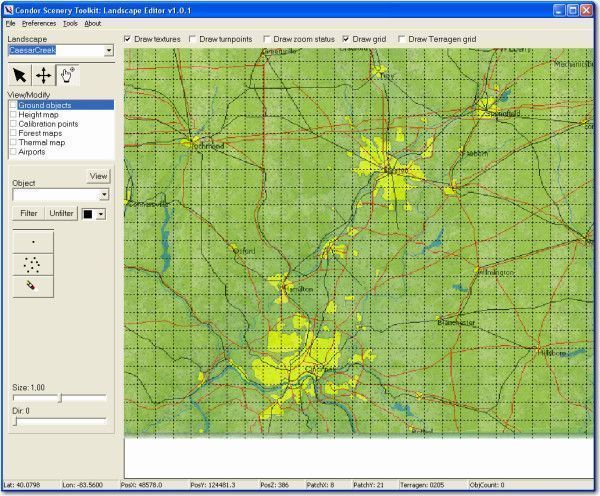 I liked this run better, so I decided to use it in Condor.  So, in LE I saved the scenery with File->Save and exported the textures to Condor with File->Export textures to DDS, and did some other stuff for a few minutes while waiting for LE to do its thing.  When I launched Condor and looked around, I saw what I think is a pretty nice scenery now, albeit at a breathtakingly coarse resolution. 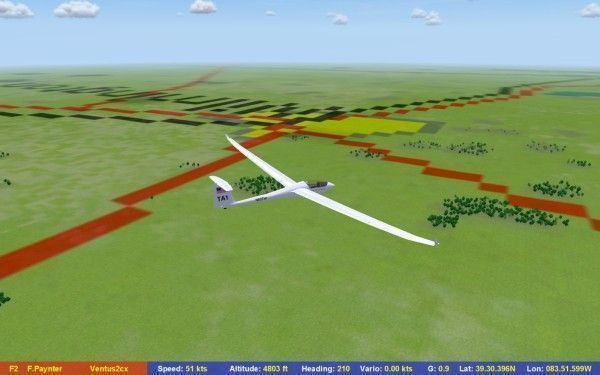 30% opacity scenery as viewed in Condor

At this point, I’m not quite sure what to do next.  With the exception of generating a custom thermal map and maybe editing the forest map to remove trees from lakes and roads, I think the scenery is pretty usable.  I may try to add some ‘canned’ 3D buildings for cities and towns, and at some point I’d like to customize the CCSC airport to look more like the actual field, but those are all projects for next winter I think.  In the meantime I think I’ll figure out how to ‘publish’ the CCSC scenery so others can try it out.