On May 2nd at 1:30 in the afternoon I sat in my sailplane on the runway at Sunflower Gliderport in Yoder, KS. I wasn’t sure exactly where I was headed, but I knew I was going to hook up to the tow plane, climb above the airport, release, and then soar as far as I could. It would be a sort of battle. In one corner is gravity, causing the sailplane to constantly descend through the air. In the other corner, my experience reading the sky and the performance built into the ship. The challenge was to find areas of rising air which will extend my flight. Gravity always wins in the end, but the longer I can stay in the ring the farther I will go. 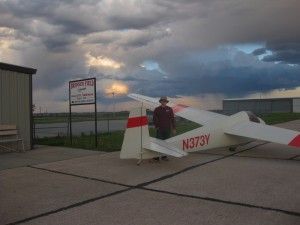 First, I never thought it was going to happen. Ever have “one of those days?” You start out with a good plan, and immediately everything starts to unravel? I felt that way at the airport. My wife and I arrived plenty early but everything we needed to do took about twice as long as expected. Finally we were finished with preparations. The sky was already starting to look good. Puffy white cumulus clouds were forming all around the airport. This is a good sign, as each of those clouds is supported by an invisible bubble of rising air–a thermal. Seeing the clouds meant I would be able to sustain my flight. It also meant that I should’ve already taken off!  I finally launched at 1:30.

I initially flew directly north as my GPS was calculating the wind out of the south. The updrafts were strong and I climbed to about 8,000 feet. Circling like a Turkey Vulture to stay in the narrow column of rising air, I was able to climb at 500 feet per minute. I passed over Hutchinson and continued toward Salina. My average speed was about 35 mph over the ground. I would dive between thermals at 60 or 70 mph in sinking air. Then, when I would find a thermal I would slow to 45 mph and start circling, trying to center my circle in the strongest area of rising air to climb as quickly as possible.

As I passed Salina I noticed the wind was shifting more out of the southwest so I crossed I-70 turning northeast. Shortly after this I got down to the lowest altitude of the flight, only 1,500 feet above the ground. I was really worried that I was going to have to land, and I had only travelled 70 miles. I started to search for updrafts and flew over a nice area of plowed black fields and caught a nice thermal back up to over 8,000 feet.  With landing averted I was careful to fly a little more conservatively and not waste so much altitude for the rest of the flight. I stayed up around 7,000 feet on average and flew for quite a ways with no more major problems.

After 4 hours aloft I had passed 120 miles from Sunflower which was a new personal best. In general I was feeling pretty good about the flight. In the back of my mind I was thinking about Gold–the Gold Badge, that is. There are internationally recognized badges for soaring achievements. The Silver Badge is awarded for a cross country flight of 50 kilometers, a a height gain of 3,280 feet, and a flight whose duration is at least five hours. The Gold Badge distance leg must be at least 300 kilometers, or about 186 miles.

The key to success would be to just keep flying, to stay in the ring a few more rounds.

I noticed that the clouds behind me were starting to dissolve. It was pushing 6 PM and the sun was getting lower. There were still good looking clouds ahead of me so I kept cruising. I was watching the GPS and creeping towards the Nebraska border. As I arrived at the Kansas/Nebraska border I contacted a convergence line. This is where winds from opposing directions meet and have nowhere to go but up. Flying in thermals all day to an early evening convergence line is the kind of thing glider pilots dream about. I was still at 7,000 feet and was able to just fly straight ahead as I climbed, never wasting time circling, and always making progress. By the time I was out of the convergence I was about 160 miles from home and gold distance was starting to seem like a real possibility!

However, there weren’t a lot of promising clouds out ahead of me. It was nearly 7 PM now, the sun was very low in the sky, and there just wasn’t much direct sunlight warming the ground and producing thermals. I was a bit over a mile above the ground and about 25 miles from my goal of 186 miles– right on the edge of my glider’s performance. I slowed to the optimal speed for distance as I glided through smooth early evening air. It was very peaceful and I kept a close eye on the mileage and another on the map to figure out where I was going to end up. It turns out I was headed right for the Falls City airport, Bremer Field.  I decided that if I could glide far enough that is where I would land. I passed the 186 mile mark around Salem and let out a bit of a victory yell. I was still at about 2,500 feet at that point and seven miles from the airport. The air was quite smooth. No more thermals, but I didn’t need any more. I arrived over the Falls City airport at about 7:15 PM, circled once, and landed.

My total flight time was 5 ½ hours with a distance traveled of 193 miles.  After landing I met Tim and Karen Pfister who had seen me circling and stopped out to the airport to investigate.  It was nice to have some company and get to show off the sailplane. Shortly after they left, my crew arrived with pickup truck and trailer.  We had been in radio contact throughout the flight and a quick cell phone call after landing let them know exactly where I had ended up.  We loaded the sailplane on the trailer and started the long drive back home to Wichita.

Comparison of the flight showed that I out-flew every other pilot in the USA on May 2nd and had the 2nd best flight in the world.  The flight also qualified me for my Gold Badge and will set several state records in Kansas.

For more information on the great sport of soaring please visit the website of the Soaring Society of America, www.ssa.org.

3 comments for “Soaring to Falls City”