[Author’s Note: Here is a newspaper article I wrote after a great flight I had in September 2010, Enjoy! — Tony Condon, abcondon@gmail.com]

Ever dream of soaring like a bird?  Most people have, I believe, and it was this dream that brought me to Littlefield over Labor Day 2010.  When faced with the long weekend I analyzed the forecast and decided Littlefield was the place to be. I wanted to go for maximum distance and altitude and conditions looked ripe for both.

What is a sailplane? Well the most simplistic answer is an airplane with no engine, but in reality a sailplane is a purpose built aircraft. The goal is maximum possible efficiency. Modern ships can glide forward nearly 70 feet for just one foot of altitude loss, and race around a course at speeds of over 100 mph. The current world distance record is over 1,800 miles. To stay aloft sailplane pilots take advantage of thermal updrafts, wind blowing up the side of a hill or mountain, or waves in the atmosphere. With these capabilities the “airplane without an engine” starts to seem like an old crate while a sailplane is a refined piece of engineering.

My ship, like all sailplanes, is a compromise. Designed in the 1950’s to be built at home, it sacrifices performance for simplicity and low cost. The structure is aircraft quality wood with fabric covering and all told it weighs in at 600 lbs with me aboard. The compromise results in a forward run of 23 feet for every foot lost while flying at 50 mph.  As a result I’ll need to stop and thermal more often and spend more time to cover the same distance.

I came seeking international recognition. Sailplane pilots are recognized with several levels of achievement and I was looking for Gold and Diamonds. I wanted to gain 9,800 feet (3000 meters) from my lowest point in flight for Gold Altitude and to finish my Gold Badge. Only about 2,500 pilots have achieved this in the USA since the award was established in the 1930’s. The Diamond? A 186 mile (300 kilometer) triangular flight that would have me returning to Littlefield at the end of the day. The plan was to launch from Littlefield as early as possible and drift with the wind to Hereford. From there, a turn southwest into the wind to Portales through the middle of the afternoon, the hottest part of the day, with the strongest thermals.  After Portales, a quick glide back to Littlefield to finish the day.

The flight started out slow.  I launched from the Littlefield Airport at 12:30 PM and started to climb in the first thermals of the day. Wind was out of the southwest at 20 mph. I was unable to climb higher than 7,000 ft for the first few hours as I worked towards Hereford. It was definitely dicey flying that low as there were several times when I thought I was going to have to land. Thankfully I was able to find another thermal each time and continue the flight. Once I passed Dimmit the conditions became more typical of soaring in the Texas panhandle. I quickly climbed to 14,200 feet at about 700 feet per minute!

Now things were starting to heat up and with the extra altitude I could afford to fly faster. I quickly rounded the Hereford airport and headed toward Portales. I dove away at a blistering 75 mph. With the higher speed I lost altitude faster, but the speed allowed me to cover more ground as I battled the 20 mph headwind. As is typical with high thermals they were spaced far apart. I managed to find a good one about every 10 miles, usually after dropping down below 10,000 ft, but sometimes as low as 6,000. I did my best to stay above 10,000 though so that I had a good cushion and didn’t have to worry about landing.

Of course, Mother Nature had other ideas and as I neared Bovina I started to get low. I quickly sank below 10,000 feet with no indication of a thermal. As I sank below 7,000 and then 6,000 feet I really worried that my day was about to end. I was down to about 5,000 feet over the large cattle lot there when I found the thermal I was looking for, and boy was it good! I rocketed to 15,000 feet at 800 feet per minute!  My Gold Altitude was in the bag! I celebrated the accomplishment and kept pressing on, past Clovis and towards Portales.

By now it was almost 6:00 pm. Often the soaring weather starts to weaken by this time of the day; however, I could see several dust devils around. These columns of garbage, dirt, and dust are caused by strong thermals tossing skyward whatever they pass. For me they were a welcome sight, indicating that the day was still working. However I was starting to get a little low again and all of the dust devils were out of my range. I started to work around the north side of Portales as I headed toward the airport, five miles to the southwest. I had been low before and was not particularly worried, but as always I had a few good looking fields picked out in case I needed to land.

Well the save was not to be this time. I searched all over for a thermal but none were to be found in my area so it was time to land. I found a nice looking open field and made a nice smooth landing.  “Landing out” is a somewhat common occurrence in the sport of soaring, especially when flying a challenging cross country flight. Sailplanes are designed for quick and easy assembly and purpose built trailers make transportation easy.

Within an hour or so my wife Leah was on the scene with trailer in tow and we soon were out of the field and ready for the trip back to Littlefield. The flight was a great success. I had traveled 156 miles in 5 hours and 50 minutes. The flight was the highest scoring flight flown from Littlefield this year in the international online soaring contest. Most important to me was that I had managed to achieve the Gold Altitude gain and complete my Gold Badge. This made the 1,200 miles of driving for the weekend completely worth it in my mind. On Labor Day Monday, Leah and I enjoyed the drive back to Wichita, KS.

Here is a link to the trace of the flight:
http://www.onlinecontest.org/olc-2.0/gliding/flightinfo.html?flightId=-366913198

And a picture of the landout: 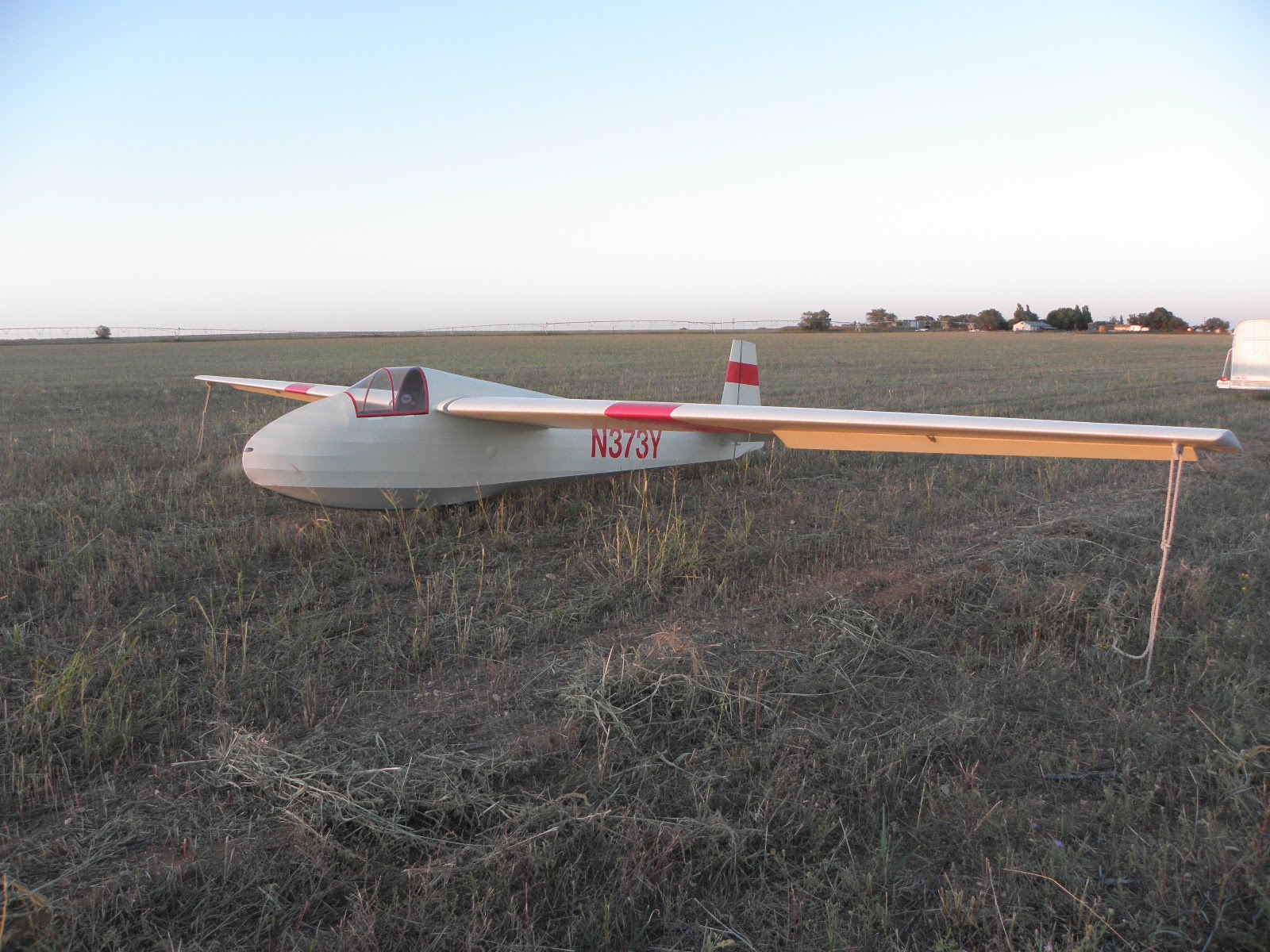 4 comments for “Soaring over Llano Estacado”