Following the procedure developed during my Perry airport review (see https://soaringcafe.com/2014/03/perry-wagener-sc-airstrip-review-part-ii/), I started by importing the 2014 ‘tullahm1.csv’ file (Comma-separated-variable) into Excel.  I prefer using an Excel file because Leibacher can handle it directly, and because there is a converter(https://www.earthpoint.us/ExcelToKml.aspx) that can convert a properly organized Excel file to KML, which can then be viewed in Google Earth (GE) for round-trip verification purposes.

The Excel file started out with about 150 waypoints, 67 of which are the official contest control points, leaving about 83 ‘auxiliary’ airports/airstrips. All in all, I found 27 ‘problem children’ that needed some adjustment.  About 21 were airstrips I considered visibly unsuitable for an 18m ship, and so they were either deleted from the database entirely (non-control waypoints) or had their ‘L’ or ‘A’ attribute removed (contest control waypoints).  The remaining 6 waypoints were visibly OK, but the waypoint symbols were in the wrong place, so their coordinates were corrected.

Regarding coordinate correction, I believe there is some magic in John Leibacher’s format-generation software that attempts to match waypoint coordinates with a database containing FAA-registered airports.  I’m not sure what criteria is used to recognize a match, but I think that when a match is found, the FAA coordinates are used rather than the ones in the original database.  What this means when updating a database is that corrections made to symbol locations may be un-done again when they go through Leibacher’s magic sausage grinder, so its a good idea to re-check results after John gets through with them and make manual adjustments as necessary.

In any case, after the above adjustments for Tullahoma the result was saved as ‘tullahm1_gfp2.xls’. This Excel file was then used to create a new .XML file for viewing in Google Earth, by way of the free Excel-to-KML converter at https://www.earthpoint.us/ExcelToKml.aspx.  I then dropped the resultant .KML file into Google Earth to verify my coordinate corrections. The image below shows the ‘before’ (airplane symbol) and ‘after’ (inverted teardrop symbol) waypoint locations. 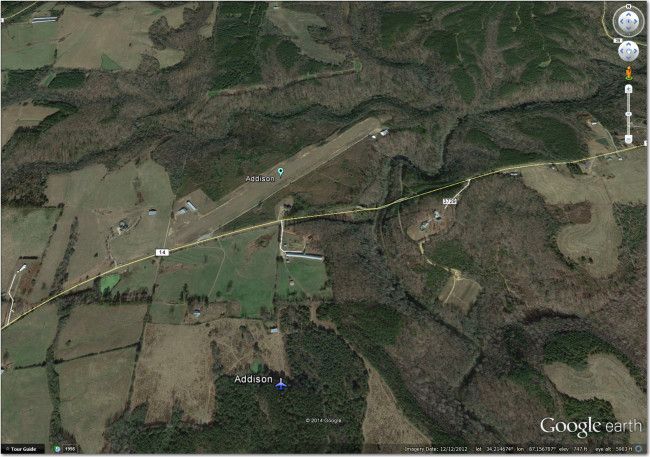 I performed the same ‘before/after’ check for all six waypoints for which coordinate corrections were made, and all passed muster.  So, at this point I have an Excel file (tullahm1_gfp2.xls) that has all the unsuitable (to me and my 18m wondership, anyway) airports removed (or in the case of contest waypoints, the ‘L’ or ‘A’ attribute removed).  In the special case of #59 Soggy Bottom, I elected to change the ‘AP’ (Airport/Private) to ‘L’ (landable) rather than remove the landable attribute entirely, as it still might be the best of the not-so-good options available in that area.

As an interesting historical aside on the waypoint codes, Dave Nadler of SN-10 fame told me that originally the ‘A’ (Airport) attribute was not considered to imply ‘L’ (Landable).  So in order to code a waypoint as a ‘Landable Airport’ you had to have both the ‘L’ and ‘A’ codes assigned (as in ‘AL’).  Somewhere along the way, this convention was apparently dropped/modified, so now, at least as far as I can tell, ‘A’ implies ‘L’.

If I were the Tullahoma waypoint database custodian, the next step would be to send the above Excel file off to John Leibacher and ask him to run it through his magic machine to produce all the formats used by soaring pilots.  However, since I’m not the official custodian and I’m trying really hard to not step on toes, I’m simply going to manually modify the .STX (ClearNav) and .NDB (SN-10) files that I normally use.  If anyone has a good email address for John Murphy, the listed custodian for the current Tullahoma waypoint database, please let me know and I’ll be happy to provide him the above Excel spreadsheet to do with as he will.