Last September, I did a full review of all the Minden, NV waypoints, as my (now) normal preparation for flying at a new site. When it was done I had identified more than 20 airports/airstrips that I deemed ‘problematic’ in one sense or another (nonexistant, too narrow for 18m, brush growing on or near the runway, etc.  When I was finished, I rounded the whole thing up in a 52-page, 47 MByte Word document and sent it off to a number of people in the Minden area who had some reported responsibility for maintaining the Minden waypoint database.  In numerous emails I asked them to take a few minutes to add their local knowledge to the mix so us poor new guys would have a better chance at separating the ‘wheat’ landout options from the ‘chaff’ ones.  What I got was a resounding silence – nothing, nada.

After recently putting the finishing touches on the Perry waypoint database, I decided to revisit the Minden one.  Much to my surprise, I found that the Worldwide Soaring Turnpoint Exchange entry for Minden had recently been updated (3/16/2014) with John Godfrey (QT) listed as the contributor.

To get a quick sense of the changes from the 2012 version of the waypoint database that I used for my review last September, I did a ‘diff’ in TextPad between the 2012 and 2014 ‘minden14.dat’ waypoint files, with the results shown below. 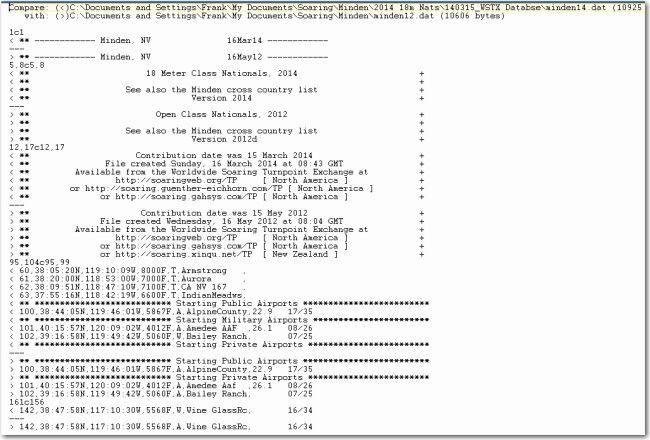 In the above figure, the ‘<‘ and ‘>’ symbols highlight lines that are different between the two files.  The ‘<‘ shows a line from the first file (2014 minden.dat) and ‘>’ shows the corresponding line from the second file (2012 minden.dat).  As you can clearly see from the above, there aren’t many differences.  It appears there were four new non-landable turnpoints added (#60 Armstrong, #61 Aurora, #62 CA-NV 167, and #63 IndianMeadows), and the codes for Bailey Ranch and Wine Glass RC were changed from ‘A’ (Airport) to ‘W’ (Warning) – huh? (more about this later).  So, other than the 4 added contest turnpoints, the two files are essentially identical.

Now, I would like to present a puzzle for all you readers, and especially the ones like me who plan to compete at Minden in the 18m nationals.  For one reason or another, you now find yourself at 1000′ agl over Youngberg Ranch airstrip.  You got there by prudently gliding toward an airport symbol on your moving map, as you know that off-airport landings in the Minden area usually end badly.  Study the following image of the Youngberg Ranch airstrip closely, and decide which choice you think is most plausible.  Before deciding, note that the double ‘Youngberg Ranch’ labels in the image mean that the same exact waypoint appears in both the 2012 and the just-released March 16, 2014 versions of the database 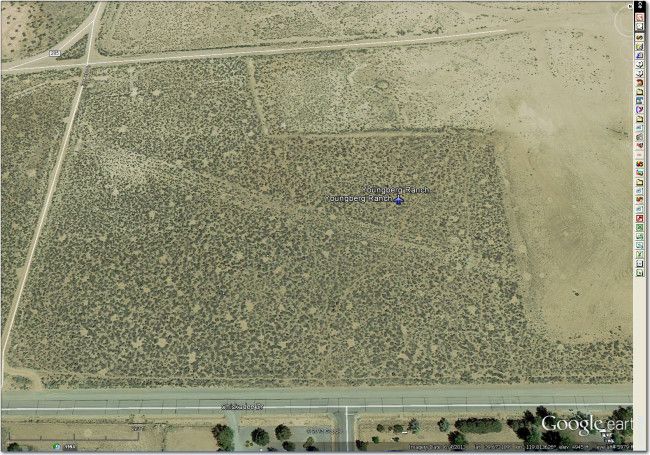 Minden is not my home soaring site, and I am not in a position to unilaterally modify the Minden contest database.  However, I urge the contest organizers to take the time to update the database to eliminate the many unsuitable/abandoned airstrips currently in the database.  with help from Al Tyler, Sam Zimmerman and John Leibacher, I was able to completely revamp the Perry database in less than one week!

PS:  In case you are wondering about that odd ‘W’ (Warning) coding for Bailey Ranch and Wine Glass RC, that is actually an error on top of an error. First, neither airstrip looks very suitable for an 18-meter ship (especially Bailey – WAY too narrow for even 15-meter ships, and surrounded on both sides by what looks very much like high crops!), and second – the ‘W’ code actually results from (I think) a failed attempt to change the coding from ‘A’ (Airport) to ‘L’ (Landable). Turns out that ‘l’ (lower case L) means ‘warning’ in STX-speak, and gets translated in DAT files as ‘W’ (Warning) – oops!. The reason I know this is that exactly the same thing happened to me during my CCSC database review, except that I caught it because I always review the entire database in Google Earth after any change, after it goes up on the WSTX.  If anyone at Minden had bothered to look, they would have seen (and hopefully corrected) the error.