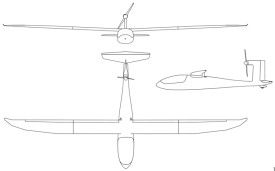 After Soaring Café had published the story about the winning team of the Green Speed Cup (Klaus Ohlmann and e-Genius), we received an interesting response: Karl Käser introduced himself as one of the ambitious team members who had created this unique ship. He was very pleased to find the good news on the web and said he would love to see some more information about the e-Genius-project in Soaring Café. Great idea! Here we go:

Karl is an active glider pilot, flying in the Allgäu and he has now been working in the aerospace industry for a while. His business career began with working on gliders. After finishing an apprenticeship with a manufacturer of light aircraft, Karl later studied at the University of Stuttgart to become an aerospace engineer. The e-Genius-project was a mission – nothing to earn money with – and one of his favorite jobs so far. “It was awesome! I think the project was really unique, I have never heard of anybody constructing such a revolutionary new aircraft in only 8 months.” The e-Genius team’s goal was to build an aircraft which would be able to compete at the Green Flight Challenge in Santa Rosa, California in 2011. “At times we worked 24 hours in two shifts. Otherwise we would never have finished the project in time. Most of the people were students of Stuttgart’s university, a handful of them Akaflieg pilots. Everybody helped as much as he / she could.”

One of these great and famous aircraft design projects in a German University funded by different sponsors! The goal was to win a prize in America to be able to pay off the left expenses. And of course several women helped to build the fine ship. Sabine Flurer was one of the busiest females around e-Genius: “When 20 or 30 people work together like we did, they can achieve a lot. Everybody was well aware of this.” Of course she travelled to the States to follow the competition in Santa Rosa. 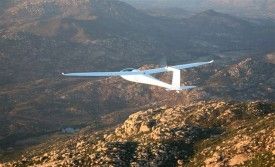 Soaring in the Western States

It was definitely worth the effort: In California e-Genius won the Lindbergh-Prize for the aircraft emitting the least noise. Unfortunately, after several days of efficiency flights, speed tasks and the noise measuring, Pipistrel’s Taurus won the Green Flight Challenge being 7% better according to the competition formula. But the team now had enough money to pay the project. Two years later in the summer of 2013, e-Genius won the Green Speed Cup in Strausberg (Berlin)! By the way: Klaus Ohlmann the pilot who flew both challenges in e-Genius, was mostly accompanied by the young designers. His blog of the CAFE (Comparative Aircraft Flight Efficiency) can be read here.

Those contests are now history – as well as the challenging but fun time of construction. In December 2009 the Akaflieg started the big task by building the outer part of the wings in the mold of a Taurus. Nine months late in October 2010 the construction of the fuselage could start, followed by the engine mounting (Nov. 2010) and the middle section of the wing (Dec. 2010). On New Years Eve 2010 wings and fuselage “got married”. After testing and finishing the cell, the mechanic and electric systems were built in March and April of 2011. This was when the e-Genius-project was first presented at the Aero in Friedrichshafen. On May, 25th 2011 e-Genius launched for the first time ever. After test flying and optimizing the ship the glider already took its first big trip – to California…

Karl submitted a very interesting presentation of how the e-Genius was built to share with Soaring Café’s readers. Please click here. Unfortunately there are no English subtitles, but the pictures do hopefully speak a clear language. He told me that there are more stories to be told about the e-Genius project. We hope to be able to fill this winter with some more electric propulsion blogs and stories.