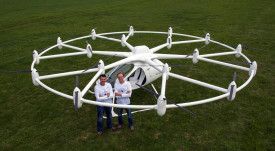 Looking for a Christmas present in the year 2016? Then mark your calendars to purchase something very special. After its maiden flight two weeks ago the volocopter, an interesting piece of German engineering will hit the market in three years. The pro-prototype had its first silent test flight in a sports arena in Stuttgart. The prototype will do further testing next year.

Well, this time we are not talking about a new aircraft design by one of the world-famous German sailplane manufacturers. We are not even talking about a glider… However the volocopter is an interesting new German aircraft, and one of the main entrepreneurs involved in this project is DG-Flugzeugbau! Their composite branch took care of the cabin which will hopefully one day transport people from point A to point B, quietly humming through the skies and without polluting the air behind it.

Two years ago a youtube video hit our home computer screens showing a funny machine called “electric multicopter (VTOL)”. Equipped with lots of little engines it was able to carry a passenger (or better a pilot!) up in the air. The same people who have been working on this project are now introducing their “volocopter”, a shiny white and elegant machine.

Its first launch was unmanned and carefully executed in an empty “hangar”. While amazon is trying to convince the FAA to allow drones to deliver small parcels in the United States, the German engineers are working an easy manoeuvrable aircraft which will one day be able to carry us short ways to work, to the beach or to the next golf course. The volocopter is much easier to fly than a helicopter and its electric engines are supposed to last at least 20 minutes. Not much yet, but a battery evolution will probably help to enlarge this time span. Volocopter will be able to launch on your private parking lot, and you can even invite a colleague to join your trip to your office.

Only in Germany an aircraft is not allowed to launch from a parking lot… but we’ve heard of people who live right next to an airfield? Come join the fun and browse e-volo’s webpage plus the other very interesting websites marked in this article. They will enlighten a cold and grey winter day!