We thank author Gerhard Marzinzik, Deputy Editor-in-Chief of Aerokurier, for permission to publish this article, which appeared in the July 2013 issue of that magazine. A special thanks to Gordon Boettger for sending us the English version, which was translated from German by his father, Wolfgang Boettger. — Ed.

A new competitor in the two-seat class has been created in the Rhoen. ASG 32 is the name of the flapped sailplane designed by Michael Greiner at the Alexander Schleicher sailplane factory for competition and cross country training.

How the ASG 32 performance compares to the 20-m two-seat class will be shown in comparisons when the prototype is flown in the spring of 2014. The wing design was based on that of the highly modern ASH 30, which was developed by Loek Boermans using the wind tunnel at the Technical University Delft. The handling will set the ASG 32 a great distance apart from its direct competitors; this is already a fact. The four-part wing is divided relatively far inward. This enables assembly by a two-man crew or with assembly rigs by only one man. The rudder will have automatic connections at the connecting points.

Already at the conceptual design stage, the ASG 32 was presented in three versions: as pure sailplane; a self-launching (Mi) variant; and as a still-to-be-designed Turbo version with electrical propulsion (EL).

The motor box will be built into the fuselage in all three versions, even for the pure sailplane and EL variant.

The engine system for the self-launching ASG 32 poses no surprises. It is derived from the engine assembly of the manufacturer and is already incorporated in hundreds of other AS models. The planned IAE 50R-AA from Austro Engines with electronic injection is a 41 kW or 56 PS engine with the proven fixed AS two-blade propeller installed in its sister sailplanes. The standard ILEC instrument will manage the power unit. The propeller will be stopped and held vertically at retraction by a conventional “propeller stop.”

Visitors at the AERO display got a first impression of the new sailplane. The polished fuselage and tail section of the ASG 32 were displayed at the Schleicher exhibit. Interested persons could even try the fit of the cockpit.

The cockpit and center fuselage section of the ASG 32 are based on the kit construction method of the open class ASH 30. Like the ASH 30, the ASG 32 is equipped with a large main wheel with hydraulic disc brake and soft suspension. The high cockpit above ground makes it a little difficult to climb into the cockpit, but it prevents any pitch-over during the start of the self-launch. 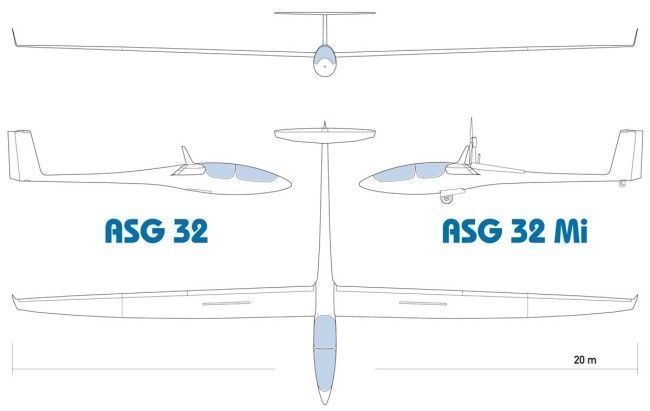 The tail assembly of the ASG 32 was built shorter in proportion to the smaller wing span, and was designed to achieve low drag in that area. For self-sufficient taxiing the ASG 32 is equipped with a large, steerable tail wheel, connected to the rudder, which extends far below the tail assembly. This is practical on the ground; however, it does not generate drag in flight because it is retracted during main wheel retraction. After the tail wheel retracts, the fuselage cutout to accommodate the tail wheel will be covered.

Although fuselage and tail assembly are already in the final design stage, the wing tooling is still being prepared. The wing spar, which is manufactured externally, is finished, as is tooling for flaps and ailerons. In order to stay close to the ASH 30 build concept, the ASG 32 uses its control hardware, but incorporates a different wing-fuselage transition. The experience of Johannes Dillinger with the Concordia helped to optimize the wing planform, which utilizes new wing tips.

Easy handling due to the 6.5 m inner wing section

With a wing area of 15.7 m^2 and a moderate aspect ratio of 25.47, the ASG 32 dimensions are almost identical dimensions to its direct competitor. However, the ASG 32 is ahead by a 50 kg higher Maximum Takeoff Weight (MTOW) of 850 kg (1874 lbs). The maximum wing loading of 54.1 kg/m^2 can be advantageous in strong conditions. The new airfoil will allow high climb performance even at higher wing loadings.

The wing will be controlled by the typical Schleicher combined flap/aileron deflection (flaperon), a concept which allows for a high-drag flap deflection of +50 degrees for steep approaches. In addition to the flap effect, there are two-level spoilers on the upper inside wing section. Since there is a lower degradation of lift by the flaps, it permits better aileron controllability at low approach speeds.

Michael Greiner’s design goal for wing controllability was maximum maneuverability. To this end, he applied his experience from the ASG 29. In contrast to his design advancement of the ASW 27, he applied a much more uninhibited control design approach to the ASG 32. With this new control kinematic, it is expected that the ASG 32 will be very agile at thermal speeds and with positive flaps. The mixing (interconnection) of flaps and ailerons is accomplished by a mixer located in the fuselage and in the inner wings. The mixers are designed so that for a corresponding turn maneuverability through the ailerons a large turning roll moment is being achieved. At the same time a higher lift coefficient can be maintained with flaps. This design philosophy requires rather large ailerons. It was important to keep the negative turning moment small with this design.

The sailplane manufacturer in the Rhoen will bring to all Schleicher fans with the ASG 32 the long awaited contribution to the two-seat class – a sensible complement to the ASK 21 two-seat trainer as well as the ASH 30.

The 20-meter two-seat class is expected to receive a further stimulus through the most modern ASG 32 aerodynamics.