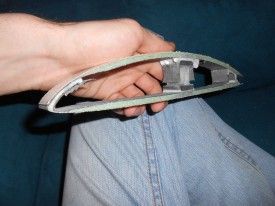 One afternoon last week, I found myself on a Munich underground train holding a slice section of a sailplanes´s outer wing. Pretending to be untouched by everyone’s weird looks, I took the time to examine my precious gift. Although I handle entire gliders and intact wings almost every day, seeing the inside of a wing always gets me all fascinated. It was extremely lightweight and extremely stable and above all, extremely meaningful.

The wing slice I was holding had actually never been airborne at all. It originated from a wing solely built for destruction due to stress testing – an important issue in the certification process of the “Mü-31” sailplane.

In short, it is a new and unique glider which is currently being built by students in Munich, Germany, and it is supposed to become the world´s most sophisticated 15 m-class high-performance sailplane. 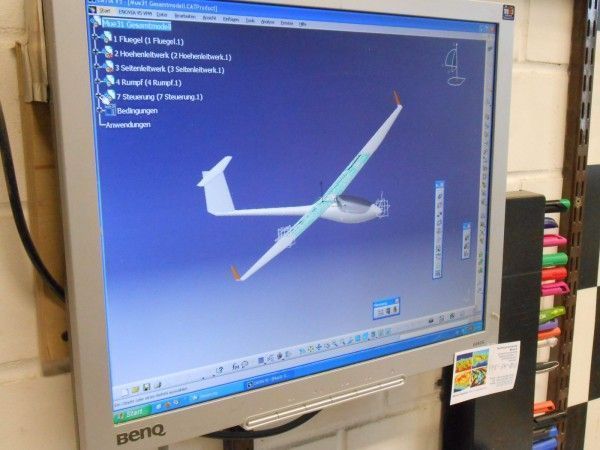 The association in charge of the idea, design, building and testing of the Mü-31 is called Munich Akaflieg. Being one of ten German student aeronautical research associations, Munich Akaflieg enables students of all Munich colleges to collaborate in various glider design, manufacturing and flight projects. As you can tell from the name, the “31” is not at all their first plane. The group whose student members are permanently changing have a great history of successful projects to look back on, including the world famous “Bergfalke” which evolved from the Mü-13, the world´s heaviest sailplane (Mü-27) and the world´s fastest and most advanced aerobatic glider (Mü-28). 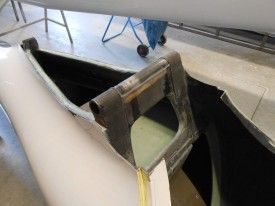 Their work in the newest project, the Mü-31, goes back to 2001. The idea is based on the concept of the successful Schleicher ASW-27, but includes many innovative elements such as an all new wing design, new fuselage aerodynamics and – above all – a groundbreaking new layout of the wing-fuselage-intersection. In view of the “31”´s look, the only things really adopted from the ASW-27 are the tail unit, cockpit layout, undercarriage, winglets, flaps, airbrakes, inner wing profile and part of the control mechanisms.

I was lucky enough to get a tour through the manufacturing by the project director, my friend Johannes Achleitner.

Johannes, a 27-year old engineering student at TU Munich, looks seemingly proud as he opens the heavy gates of the workshop at Garching Campus. Hearing I have recently joined the Soaring Cafe team, he offers a bright smile: “Ah, the Cafe. I have literally devoured the stories and pictures about Dick Butler´s Concordia Project. We always found lots of inspiration and useful hints there.” And in fact, much of the workshop layout and details in the shop atmosphere remind me of the fascinating time where the whole world kept an eye out for updates on “Concordia”.

The bottom side of the inner wing is the first thing we come across. The main spar, formers, ribs, the entire wing inside structure and even most of the control mechanisms appear almost readily assembled in the mold. The wing´s top shell is also already laminated and the halves are due for being glued together in the next few weeks. 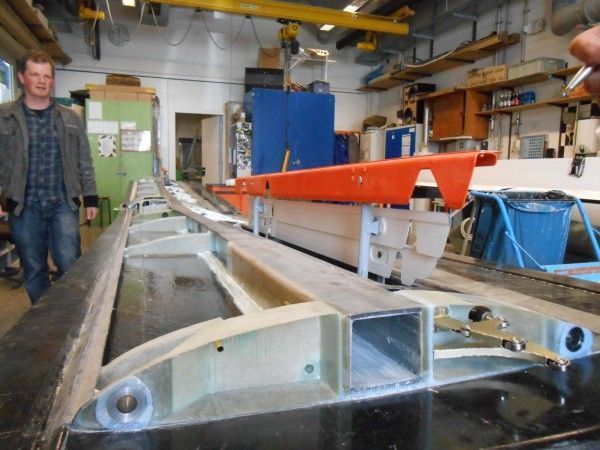 “The wing concept of the 31 is something very new to us”, explains Johannes. “Using an innovative wing-fuselage-intersection tested in wind tunnel experiments in cooperation with Delft University, Netherlands, the glider will have an uncommon high wing configuration. This enables us to build the wing in three parts instead of the common four section concept.” 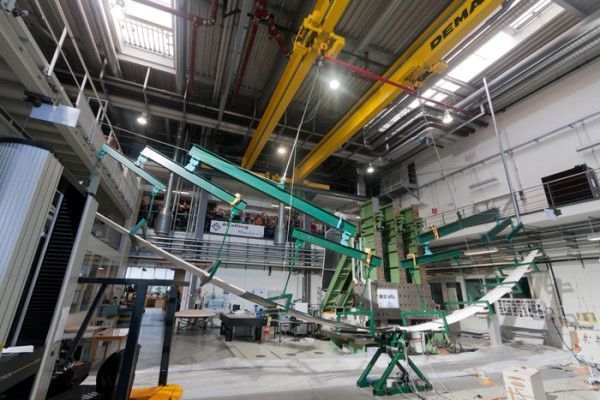 Stress test of the wing

In fact, the central part of the wing will be rigged on top of the fuselage and is not divided into a left and right wing. The aerodynamic advantages are great due to a continuous wing top face and only two instead of the conventional four intersections with the fuselage.  The large outer wings are already done completely, and Johannes proudly gets me to move the aileron mechanisms. They are running so smoothly it´s almost impossible to feel. “Fitting the mechanism in there was quite an issue. I´ve spent two weeks trying to spare the final two millimeters”, he says. 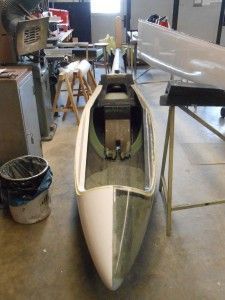 The fuselage shell itself is standing at the side of the shop, and as I aim to examine it closer, Johannes detains me, almost apologizing: “This is not the fuselage that´s going to fly. We´re going to break this one to pieces in May.” Then he explains how the certification of the glider requires the team to build all of the “31”´s main structure elements twice: One for stress testing until they break apart, the other one for flight. “We´re not concerned about the fuselage test results, but it will be crushed anyway. The wing stress test last year was a much bigger issue…” He guides me to a wall with pictures and points at a photo showing the whole test wing assembled in a machinery which bends the wing ends upward at an insane angle. “The noise when it finally broke was remarkable. Now we know what the wing structure actually can bear, and it´s quite a lot.” 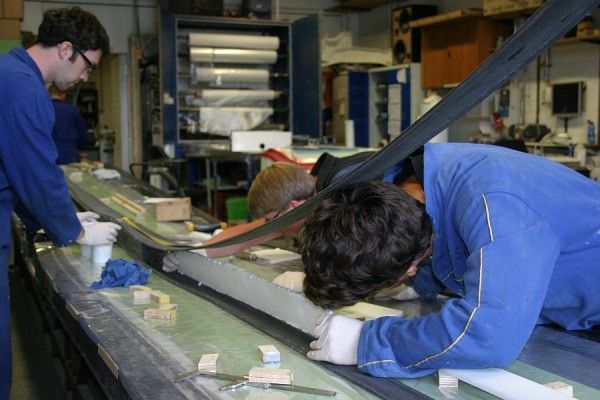 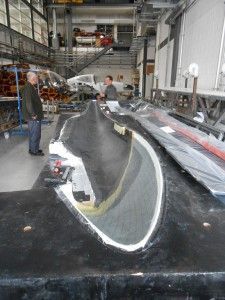 fuselage for flight – halves in mold

The actual flight fuselage is still in two vertical halves, but they´re readily laminated in their molds, waiting to be fixed together. Although the fuselage design features the ASW-27´s tail and cockpit units, it looks entirely different from Schleicher´s. The tailboom is designed in correlation to the wing-fuselage intersection to support the aerodynamic advantages.

Johannes Achleitner is in charge of the Mü-31 project since 2009 and has supervised the finishing of the design process which had already been going on for eight years, as well as most of the actual manufacturing. Although his work with the “31” has obviously become the central part of his life besides his excellent cross-country, instructing and studying, Johannes points out that there were more than fifty people involved in the whole process, many of them just as important as himself to the project. “We´ve done that togehter”, he accents repeatedly.

The Mü-31 is scheduled to be finished within this summer with support of the Schleicher company. “The whole thing would have been impossible without their support and assistance”, says Johannes. With a deep breath and a twinkle in his eyes he denotes that the first flight of the “31” is quite likely to happen this year. 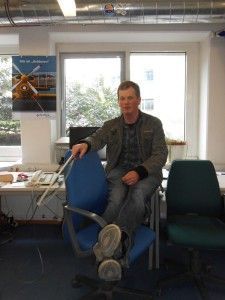 Finally we end up in the Akaflieg´s design bureau, chatting over some tea about sailplane design. Although many of the talk´s points would go beyond the scope of my column, there´s some statements I would like to share. “It´s amazing to be involved in such a project from near beginning to end. Engineering Studies at university don´t nearly give you the ability to actually design and build an aeroplane. Practical experience can´t be replaced by endless lectures and scientific trivia. Not that I´m totally displeased by that”, he adds with a grin, “because it boosts my market value…”

I ask him what it is that´s so necessary for building aircraft that can´t be learned in college. “It takes a great deal of effort, bravery and decisiveness. It´s indispensable to be a good engineer and to have more good engineers behind you. It takes tons of motivation and diligence. And finally, there´s nothing more precious than a great team with unbreakable spirit where everybody can feel good. Basically, all of these factors can be found within the Akaflieg.”

As I high-five him for goodbye, Johannes holds me back for another second. “Wait a minute”, he says, disappears into some kind of junk room and returns with a short wing section. “This is what´s left of the outer wing after the stress test. May I offer you a slice?” Back in the shop, he turns on the largest saw he can find. The noise and the view are unspeakable and under normal circumstances would be unbearable for any keen glider pilot. When he hands me my souvenir, he peers at the real flight outer wings standing at the side of the shop. “Glad I didn’t mix them up…” 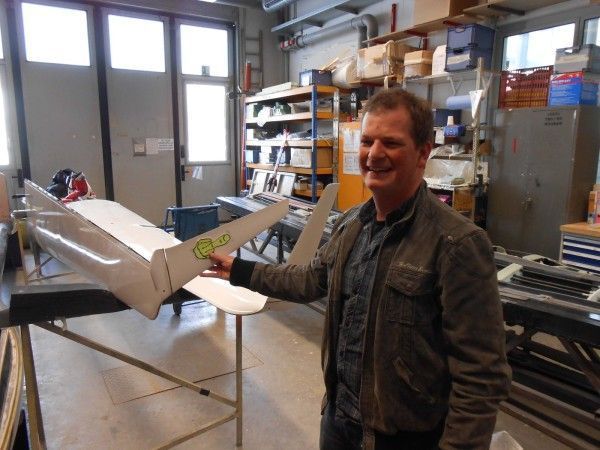 Johannes and the finished outer wings