Check out all the news here and see all the photos here. 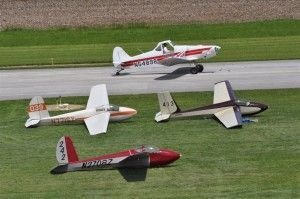 Today looked pretty grim with a lot of overcast this morning. Our CD Jerry Steffen set a TAT, (Hope I get all this right….), of Kendallville south to Noble Hawk with a 5 mile radius, 28 miles east to Marvin Thiel with an 18 mile radius, 42 miles NW to Kirsch with a 15 miles radius and 25 miles back to Kendallville with a 1 mile radius.

If all that makes sense to you….then you are a Competition Pilot. Congratulations!

The crews filled the grid at 12:30 and the sky still didn’t look good. It just wouldn’t clear off and heat up. The high today around 73°. The winds though, were out of the east today and much calmer. 5 to 8 mph.

Jerry sent our contest sniffer up at 1:00 and Lucky Eckman called no joy once again. Just not enough lift to get things done.

But the sky was clearing and things in our area this time of year can start to work a lot later. We actually can be launching as late as three or four o’clock, (Thanks to daylight savings time…not quite sure what we save around here but there seems to be plenty of daylight.)

So everyone picked their favorite spots and relaxed a bit. At 2:00 Lucky headed up again and reported weak lift. “Weak lift” seemed to be all the PW5 guys needed to hear. They wanted up.

At 2:30 the three PW5’s took the tows. Bill Snead 6W, Patrick Tuckey 4K and Tom McKnight 67 stayed in the air and reported lift. This of coarse, fired up the 126ers and there was a quick pilots meeting at the grid. Not sure how this works but the pilots and the CD agreed on a shortened task and the pilots headed for their ships.

We got all 13 126’s and the three PW5’s in the air in good time. I was catching rope and running wing for this and it’s pretty exciting. Reminding everyone that this is our first contest, and things move a lot faster when you have three tow planes and 16 gliders than it would on a normal local soaring day. You have to hustle, hook up, get that wing and go. And safety is always the number one concern. Nobody in front of the gliders, the area clear, the tow rope correct, slack out, the canopies latched, the tow planes and runners at the right spots at the right time.

This is some major work and would be quite impressive to see at an even bigger event with many more gliders on the field.

One glider only finished the task and returned to the home field. PW5 pilot Bill Snead in 6W completed the task at 42 miles in 1:40.

With the evening closing down and all land out crews and ships safely back to home field, the talk turned to tomorrow. The weather is supposed to be hotter, and better.

I can’t be certain of the weather. But I can be certain that if there are tow planes, the PW5’s and the 126’s will be back up there!