With less than a week to go before the official start of the 18m Nationals here at Minden, NV, we contestants still don’t have a final waypoint database.  What we do have is an email from CD John Godfrey citing John Leibacher’s workload as the excuse for not having the updates out by now, and describing what will be in the final database that is to be ready “Real Soon Now”.  IMHO this could and should have, been done months ago when John wasn’t swamped with other commitments, but hey – what do I know?  John Leibacher is literally a world-wide soaring treasure, as he manages waypoint databases for ALL worldwide soaring sites, not just the ones in the USA.  We should be working around his work schedule, NOT citing it as the reason for not getting the job done in a timely fashion.

Last winter, when I did my initial waypoint review of the waypoint database used for the 2012 Open Class Nationals, I found a number of problems with the airports/airstrips cited there, and passed that information along to what I thought were the Minden pilots who were managing their waypoint database.  Absolutely nothing resulted from that effort – mostly because of a disconnect between ignorant me and the real ‘local’ pilots.  The pilots I was talking to weren’t the right guys, and the right guys don’t even use the contest waypoint database.  Most local pilots use a database maintained by Stu Tattersall, and because no one was regularly flying with the contest database, nobody was bothering to correct the many and obvious mistakes.  So, we have the locals flying one database, and the contest officials promoting another one – wonderful!

I know this now because I’m out here at Minden already, getting in some dual familiarization flights with Soaring NV & XC/Contest pilot Tim Gardner. While getting ready to fly yesterday morning, I also ran into Stu, and made arrangements to sit down with him and Tim Gardner over dinner after flying to see what could be done to make the contest database a bit more pilot-friendly.  So, after we got all the flying done and the gliders put away, we all trooped down to the Taildragger Cafe/Bar to hoist a brew or two and work on database issues.  Dave Nadler (YO) accompanied us and made some valuable inputs to the process.

Here are the disjoint pieces of the Minden waypoint database puzzle:

Over dinner Stu Tattersall, Tim Gardner, Dave Nadler and I tried to figure out how to make the most improvement to the current contest database in a manner that would be least disruptive to contest pilots.  We decided that the way to do this was to go through the ‘Godfrey’ list of airports that were deemed ineligible for the airport bonus and sort them all into two categories – known to be landable, and known to be unlandable. In addition, landable airports/airstrips not in the contest database would be added.  Once this was done, I would create modified .STX  (ClearNav) and .DAT (everything else except SN10) files, and Dave volunteered to create a similarly modified .NDB (SN10) file.  These would be made available to contest pilots on a ‘totally unofficial, to be used at your own risk’ basis.

There is a cool XLS-KML converter at http://www.earthpoint.us/exceltokml.aspx, so I first sucked the nm_mndn4.dat (CSV-formatted) file into Excel and edited its header to remove all the text and add the required column headers, and then ran it through the converter to produce a KML file viewable in Google Earth.  This allows me to verify that any changes I make actually show up in the right places on the map. 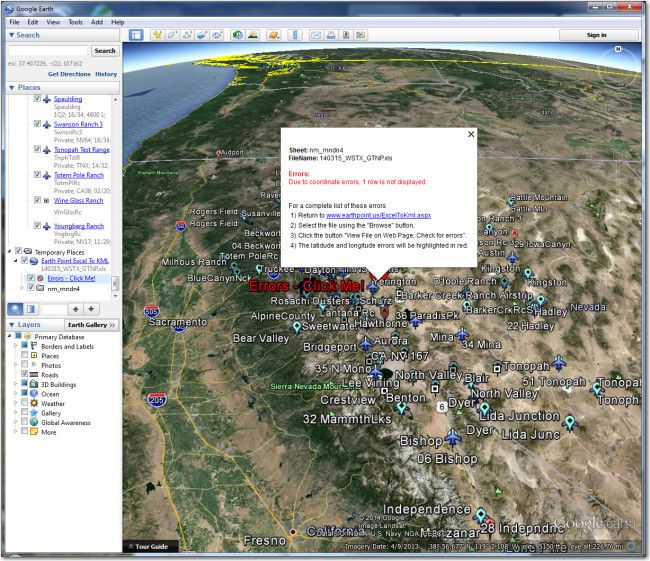 Result from the cool EarthPoint Excel to KML converter. Even catches mistakes!

Of the 32 airports on the ‘Godfrey’ list, 19 are known to be unlandable. These waypoints (or at least the  L ‘landable’ coding in the case of control points) were completely removed.  These are

The two other waypoints (102 Bailey Ranch and 142 Wineglass Ranch) mentioned in the email were also removed.

To try and avoid adding to the confusion, these were added with waypoint numbers starting with 200.  Note that the ‘DL’ after some of these names denotes a ‘Dry Lake’ landing area.  According to the locals, dry lakes can be perfectly suitable landing areas, BUT trailer retrieves can be difficult to impossible.  The good news is that aero retrieves are usually available from dry lakes.

The only waypoint that had a badly offset symbol was Lantana Ranch, where the waypoint symbol was located over 2 miles south of the actual airport.  This was corrected in the XLS file, and checked using Google Earth.

most soaring database files are just formatted text, so it doesn’t take a rocket scientist to manually modify them.  There are a couple of gotchas though – the STX file format is TAB delimited, and it is pretty easy to add an extra tab or inadvertently delete one, as many text editors don’t actually show the tab characters.  I use a text editor called TextPad, and it provides an option to make them visible.  Also, when I add a waypoint to an STX file, I generally start by copy/pasting an existing line, and then making sure I don’t add or delete any tabs.  The DAT file format is comma-delimited, which poses the same problems as the STX files, but at least in DAT files the delimiting characters are visible by default.

So, how to test the result?  For the DAT file, I simply followed my original process and sucked the modified DAT file into Excel, converted that result to KML and then viewed it in Google Earth. Using this procedure, I was able to verify that the deleted waypoints were indeed gone, the relocated Lantana Ranch waypoint was indeed in the right place, and the added waypoints showed up where they were supposed to (actually, the RabbitDL waypoint was off a bit due to a typo, so the check payed off!)

The STX file is a bit more problematic, as I haven’t been able to figure out an easy way to import it into Excel.  The tab-delimited format will import OK, but because the latitude and longitude coordinates are broken up into separate degrees, minutes, and seconds columns, it would take some programming to convert them to the lat/lon numbers that EarthPoint wants :-(.  So, my plan for the STX file is to simply stick it into the ClearNav in the front seat of DX tomorrow and pan around to see if things are where they should be, paying particular attention to Lantana and RabbitDL.

So there you have it – the story of the unofficial, unauthorized, and un-whatever else Minden 18 meter nationals waypoint database.  Assuming that Tim, Dave, or Stu don’t find any egregious errors in my work, it should be available in DAT, STX, and NDB (thanks to Dave) format for any pilot who wishes to take his/her chances on my clearly shoddy workmanship ;-).  See Dave Nadler, Tim Gardner, Stu Tattersall or myself for the files.  When you do so, please say thanks to Tim and Stu for giving us the benefit of their local knowledge.