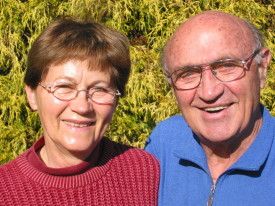 During the Southern soaring season in 1988/89 Hans-Werner Grosse and his wife Karin shipped their ASH 25 to Australia to explore the fifth continent by glider. Remember, this was well before the private use of GPS, well before flying with sustainers and well before OLC documentation! However the Grosse’s had a camera and so were able to document their soaring stories on filmstrip. Now, more than 25 years later, Hans-Werner uploaded the “antique” material to YouTube concluding that he felt safer in his beloved engineless ASH 25 over the Australian outback than he would have done in a powered plane. Well, only glider pilots may understand this statement…

As most of the movie is commented in German, here is a short summary for the Café’s English speaking visitors: At the end of the Southern season Hans-Werner and Karin planned to travel from Alice Springs which is more or less in the middle of the continent to Gawler (Adelaide’s glider port). 1320 kilometers out, crossing over a waterless moonscape. 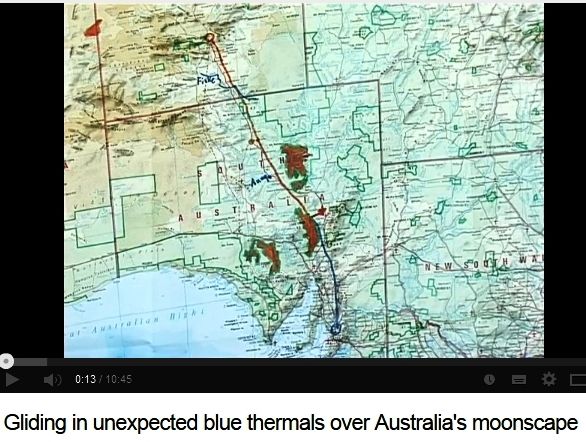 The Grosse’s record season was almost over, but the forecast was still good enough to be confident about a flight like this: tailwind + clouds sounded perfect. Right after being towed into a good thermal Hans-Werner had to pull the air brakes to make sure his start point was – according to the rules – low enough to correctly document the declared flight from higher altitude (600 m agl) down to sea-level. The day began promising, the clouds at 1500 meters agl painted a nice pattern of dark shaded spots onto the ground (in Europe these would have been interpreted as forests). But a little longer into the flight the crew found a low-lying inversion, blue skies and only weak thermals which didn’t lift the glider higher 1000 meters anymore… Hope made them hang on, hope for the forecast to finally become true. The rough and deserted landscape looked scary, not very inviting for a low soaring glider. The creeks were unusually wet, explaining why the thermals were weaker than forecasted. Obviously the weather god had forgotten to tell the weather service about the latest rainfalls. With only a handful of landing areas on their way the Grosses flew on, carefully making their way to safely land before sunset.

Hans-Werner, thank you very much for sharing your experience and illustrations, no matter in which language! Soaring Café wishes you always happy landings!