What a day last Sunday !!! At 10 AM, I could see clouds popping up already and I felt during the day the cold but strong wind from the thermals here in Alphen.
Looking in the evening at the OLC , it indeed was a great day!
Cloud Streets till late in the evening, good thermals  and convergence ,  it was all there.
From Venlo,  a new Dutch record was flown over 1.061,40 km. by Robert Werts and Luc Stalman in the Nimbus 3DT. Robert flew a 1000 from Holland last year as well. 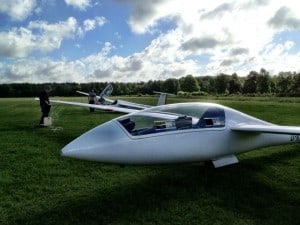 Ready to go early in the morning! 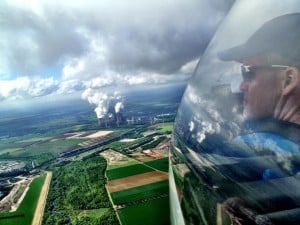 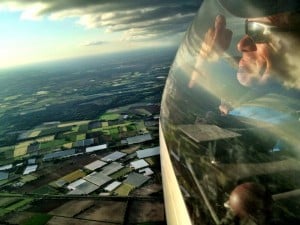 Pictures courtesy Luc Stalman from the back seat. One from  Robert  after they just were on their way and a “happy- thumbs -up- Robert “in the end of the flight.

From Eindhoven, long time friend Gerrit flew in the Duo Discus 645 km.
Mark [Ventus 2] and Alfred Paul both flew from Soesterberg straight South to,….St Hubert, 802 km. yes the place where they only could fly 3 days during the Belgium Nationals. When they finished the comps the better weather arrived. Grrrrrr…..have seen that too often!!!!
Holland had a total of 111 flights and the first 49 flights were between 327 and 1.063 km!!!!! Mostly flown over Holland and a bit into Germany and Belgium. VERY special!!!!!
Several out and returns as well. 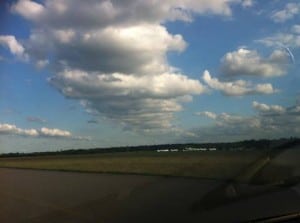 The weather at 7.30 PM as seen and shared by Natasja close to Soesterberg.

With this great weather, how lucky can you been, the open military comps started at Malden and on Monday they got an AAT in all 3 classes.
But what AAT’s; Club 5 hours, combi 4.5 hours and open 4.5 as well. When you are interested you can follow the pilots the rest of this week, if you did not do so already,  on
www.live.glidertracking.com
40 Participants in total and day 1 was well spend by Jeroen van Dijk [ club class with 13 participants] ] who arrived home last week with 2 CUPS from Romorantin and won in Malden day 1 with 405 km. in the Mosquito in 5 hours and 4 minutes! He clearly was still in the winning mood!!!Good on him! Normally you go to France for good soaring weather , but after one day of competition-flying there,  he found out that the weather here in Holland is TOP!!!!
Oh oh that weather!!!
In the combi class with 13 pilots, Adriaan Oudhuis won the 1000 points flying in the ASW 20 384.5  km. in 4 hours and 32 minutes.
In open class [ 13 pilots] Tim Kuijpers [DG 800 S/18m.] won the 1000 points before his mate, Rene de Dreu [988 in JS 1 Revelation].Tim flew 391 km. in 3.48.
3 Of the Kuijpers family are flying. Dad Ferdi, in the Duo discus was on spot 2 in the combi class and mum Frouwke had a less good day in this class being last after an outlanding on 85.5 km. 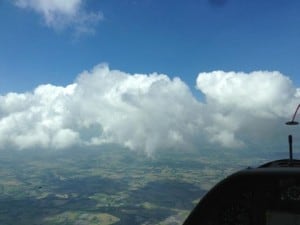 The weather as seen and shared by Rene on day 2 of the Open Military Championships in Holland [Malden] . Not bad is it?

On Tuesday an other nice day , number 2, with for the CLUB pilots 260 km. on the menu and the winner for the day was Frank Hiemstra one of the boys behind GLIDERTRACKING.
He flew his St. Cirrus with a speed of 74.5 km./h. over Holland and into the 1000 points.
Jeroen was with 830 points runner up!
In the combi class the 13 pilots had a much more difficult day to fly their 270 km., with only 385 points for the winner in the Duo-Discus and 11 outlandings . In Open class Tim and Rene departed again together and finished in the same time as well. But on handicap Tim won the 1000 points, Rene had 7 less.
6 From 13 made it home!
Today they fly again till June 7 and they keep this great weather!
Tasks today;Club 325km Combi 443km Open 451km. NOT TOO BAD !!!!
The day ended however TOO BAD! Very sad but the day was neutralized after a deadly accident with one of the single seaters killing the pilot.Tomorrow is cancelled as well.
Condoleances to the family and friends of the pilot and a lot of strenght for those who had to witness the crash after the cable broke. 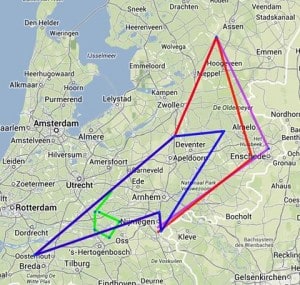 Today’s tasks as shared by glidertracking.

From Diest in Belgium a nice flight in a Duo Discus last Sunday, nearly all over Holland with a cloud street in the evening till 9.30 PM!!!

Also Finland had it’s share. On TV the meteo said already that the North of Europe had great weather and yes they were correct ; Olli Teronen [ASG 29 e/18m.] flew 714  within it , a nice 500 km. triangle from good old Räyskälä. Young Aku Jaakkola flew from the same field in the LS 8 645 km. The best flights till now for this season from this field, where I for sure go back one day!!On June 8 the Finnish Nationals start in Räyskälä and Woolley has arrived already from Australia to practise for next years WGC.
There are 19 pilots flying in St.Class, 7 in Club amongst them Australian guest Adam Woolley and 23 in the handicapped class.
The official news;
—” Welcome to Finnish Open Nationals and Club Class Trophy – the Pre-WGC.
The Pre-WGC in Club, Standard and 20-m Multi-seat Classes will be organised from 8th to 16th June 2013 in Räyskälä in conjunction with the Finnish Open National Championships in Standard, 15-m and 20-m Multi-seat Classes.—”

For our UK friends in club class and the pilots flying the  regionals,  the comps is over and what comps they were.
What an epilogue of the UK club class nationals last Sunday.
What a hero that Will Ellis, flying his KA 6E to 1000 points with a speed of 103 km./h. Stunning good!
Great to see how many pilots flew this competition and lovely to see they had atleast 4 top days weather-wise and a total of 6.
As my English is less good than the real “ pommie English”,  I copied and pasted a few words I firmly back up.
—”Massive congratulations to Pete Masson on becoming the UK Club Class Champion . An epic achievement, especially after a few years without competing.
We can only hope some of the talent  rubs off on us—”
I had no time to write about the Regionals so here we go;. Andy Davis also put on a masterclass
Dave Watt won the 1000 points on the last day before Andy, who clearly won the regionals in the ARCUS;5869 points. Dave did well too with 5708 points.
For the PW 5 pilot  the 407 km. were a bit TOO much. He flew 138 km.! On day 2 he flew 430.2 km. but it was too difficult with those long tasks to finis on either of the 6 days.
Still a great effort!!!
And,…..—”Andy Davis also put on a masterclass in the Regionals to win another title.”—NICE!
More pilots flew that Sunday from Lasham and Roy was one of them flying 790 km[700FAI triangle] in his ASG 29 E.

Dave Masson had the day of his life as well. Maybe not even realizing how good the weather was, as he had not really had a look at it, he finished his day flying his LS6 WL, with a great out and return up N.
—”If the paperwork etc  is ok then it is the first 15m 750 O/R so I can get the distance and speed records and I’ll be jolly pleased with myself .—”
So a great day in the UK as well and it seems we keep this weather for a while!

Germany , specially the South and East, however struggle with too much rain, too high rivers and for that reason FLOODING, the highest level of water in 100 years.
Passau has a risen water-level of 15 m. and this has not happened for 500 years. 3 Rivers join there and all are full of water!!!
I heard that even the airfield from Unterwössen , where some of my friends fly, is flooded!!!I checked with Maria;
–” that’s correct the airport is flooded but the gliders are on a safe place. They count on a level of 2 or 3 meter at the field. It seems a dyke has been broken at Bernau as well.—”
Not good, also Prague is in problems and the army tried to keep the beautiful old town safe from too high water. Switzerland and Austria suffer as well.
People have been killed and several people are missing.

Kilometer-eater Guy Bechtold from Luxembourg moved to Ouarzazate and the 3 gliders flying there had quite good weather.Janusz Centka [ARCUS M] flew his 5th over-1000-km. flight and the manager from the German soaring business Fly Down Under at Stonefield in Australia , Konrad Mayerhofen just missed out on a 1000 in the DG 500 M /22m.
Since May 23 pilots  flew 11 over 1000 km., flights in Morocco and you cannot always count there  on a 1000 , as I heard last year from the Schmelzer boys.

On Monday I was in Amsterdam again and after picking up the kids from school we went for a “cruise” on the canals with an Australian guest. Mike, Moo for insiders,  arrived, flying his Airbus 340 as captain  to Amsterdam from Hong Kong and spend the day with Inge and later with all of us. Both Inge and Mike made their hours as former Sportavia tuggies.
Sad news as well for “old” Sportavia fans;  a couple of  years after Maureen died, Dolf her husband died yesterday.  Though Dolf was not involved in Sportavia [ his wife Maureen was…. as secretary for years!!!] he visited the WW2 hangar a lot and flew his own light plane.

Around 70 people and 20 gliders have registered for the “special -student-summer-camp-day on June 22 in a paddock in the middle of Holland. One of the highlights of the ZES- lustum- 50 years!Will be a lovely happening! I am invited but unfortunately I can’t go.

Good luck for all pilots participating in the VINON EGC with 20 pilots in 15 m. class, 23 in 18m. and 24 in open.
Looking foreward to see how the JS 1 with Killian and Ronald will fly compared to p.e. the Quintus, EB ‘s, Nimbus , ASH 25 , ASH 31 and Antares.
And a special HAPPY BIRTHDAY  in Vinon to Marion the more than faithful crew from R1 , Steven Raimond! Such a great team together , such lovely people and already for years and years and years!
No news this upcoming week as I will be on holiday WITHOUT a laptop. SORRY.Next news on the 16th. Have fun. Here is a link to follow the EGC;http://www.egc2013vinon.fr/en/