Heavy cirrus to the north and over Uvalde and blue sky with CUs 30 km south. After release I climbed to 5000′ MSL under a small wisp under the cirrus deck, and seeing some small Cus to the east in the sun, I decided to go have a look. The CU evaporated by the time I got there and I tried another one, same problem, probably just bubbles, and I was now a bit far for my altitude and I headed back to the airport. I was contemplating a relight but found 0.5 kt at 900′ AGL. It was hard work to climb out of this hole with full ballast. 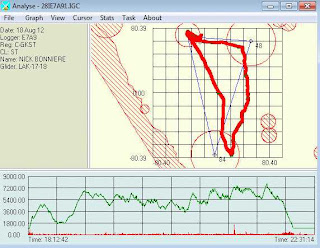 I started with a small group of gliders and headed out on the first leg, not finding much lift but progressing slowly. After the first area I was flying with the Belgians and we could see sunshine to the east and slowly headed that way. We eventually got to the sun and conditions improved greatly. Cruise speed increased to 90-100kts and lift under cloudstreets was reliable. I turned in the second area earlier than the Belgians, who decided to continue another 15 km to try to improve their overall speed. I didn’t want to chance not getting back to Uvalde with the cirrus moving in and cutting the lift. As it turned out, the way home was paved by a long cloudstreet, slightly off course but worth the detour since the direct way home had few CUs with cirrus overcast. I circled only once in 150 km to gain 1500′ in 5 kt thermal. 50 km from home the Belgians had made good speed and caught up to me, but were 1000′ lower. So they had gained 30 km, but needed to climb that 1000′ and in the end lost what they had gained. We ended up with the same speed. It was good to finish the contest on a good flight worth a 10th place finish.