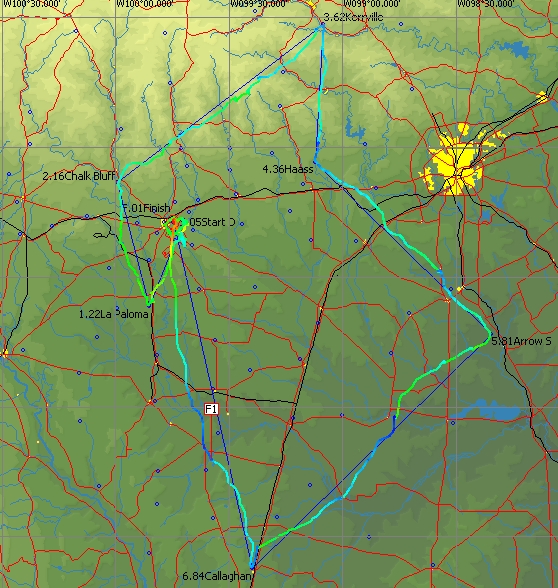 It is amazing what difference 10 minutes can make in a start time.  We had trouble finding good climbs and I was down to 3300 ft before the first turn and then ran the second leg between 4-5000 as we headed north into the hill country.  Just before the second turn I finally had a climb that took me to 6000.  As we ran along into the hills, Jerzy was about 800 ft above me and he connected with a thermal that I didn’t get at my altitude and he was able to run ahead of me.  We found the thermals very disorganized down low, but once above 6000 they improved. 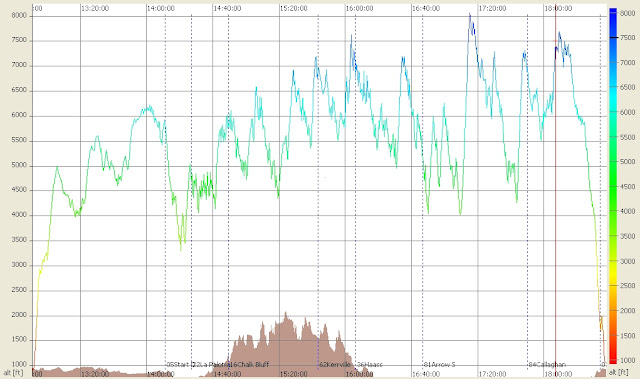 I rounded the northern most turnpoint and then the legs started to align with the wind and I was able to bump and run along streets.  On the way south, I was able to get ahead of the group who had caught me and by the time I reached the fifth turnpoint to the east, I had caught up with Jerzy again, but was still 1000 ft lower.  The leg to the southern turnpoint was across the wind, so I jumped from street to street and on occasion found myself lower than I would like.  Now that we were out of the hills and the day more developed, the thermals down low were much better and I was able to consistently climb away.

After rounding the last turnpoint the streets aligned well with the leg home.  I stopped once for 2 turns, gained 650 ft and then bumped the rest of the way to the finish.  The final leg today was 148 km in 44 minutes at 201.9 km/hr.

But, the amazing stat for today is 3.5 minutes cost 10 places on the day, ouch!