Weather to Fly: Convergence Along a Sea Breeze Front

Editors’ Note: This article was originally published in the May, 2012 issue of “Soaring” magazine. We thank the Soaring Society of America (SSA) and author Dan Gudgel for permission to re-publish Dan’s article.

Author Dan Gudgel is a professional meteorologist, glider flight instructor, and tow pilot. He has served as meteorologist or chief tow pilot at over 60 local, regional, national, and world gliding competitions. This year, he will serve as Chief Meteorologist for the 2012 World Gliding Championship in Uvalde, Texas.

Convergence in the atmosphere’s airflow provides a mechanism for providing useful lift for a soaring pilot. The classic example in soaring aviation texts for convergence lift is often illustrated as that associated with a sea breeze.  This article will be a simple review of the development of a sea breeze and its associated convergence lift. The Southeast Texas Gulf Coast sea breeze is specifically referenced as an example with its frequent influence on the Uvalde area weather.

In its constant attempt to achieve equilibrium in regard to any density or pressure differences, atmospheric motion or wind results. As a thermal property of a substance specific heat is the ability of that substance to absorb and store energy without raising its sensible temperature. In regard to the incoming energy absorption of various surfaces and compounds along coastlines or adjacent to large lakes, the specific heat of water is the highest of common compounds and when compared to that of typical earth along coastal sections (water’s specific heat is approximately 4.5 times higher). At the same latitude and under the influence of the same upper air synoptic weather pattern and its general atmospheric temperature profile, incoming solar energy results in differing surface temperatures due to the aforementioned water and surface specific heat differences along with other thermal-influencing properties such as coloration and texture.

As a simplified initial state of the atmosphere at dawn, envision one where the air immediately above the sea and land are the same in temperature and the isobars of pressure aloft are parallel to the surface. As pressure is defined as the weight of the air molecules above us, the isobars decrease in magnitude with an increase in altitude. 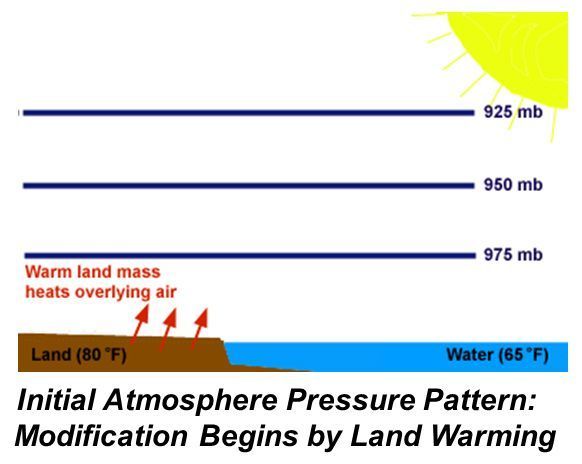 In such a simplified model, with no temperature or density differences, there is no wind (pressure gradient = 0.0 mb).  The Equation of State for Dry Air describes the relationship of mass, pressure, and density. 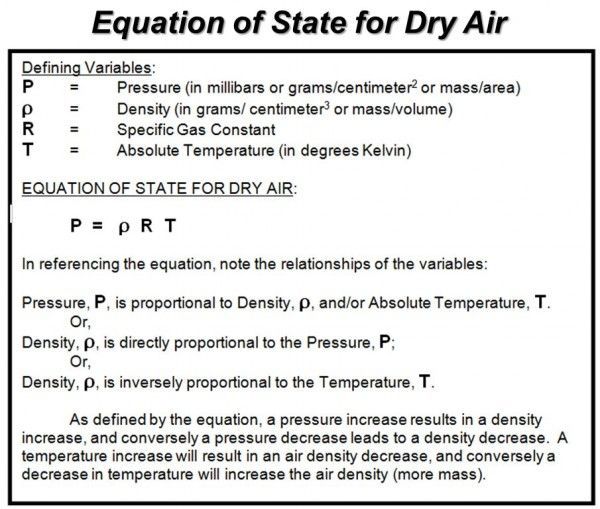 After dawn, incoming solar energy begins to add energy to all surfaces, water and land. But the ocean remains relatively steady in temperature with the water’s tremendous capacity to store energy while the land with a low specific heat and as a poor conductor heats much more quickly than the adjacent ocean. With higher surface temperatures, air immediately adjacent to the land warms by conduction and subsequently the lower atmosphere warms by the convection mixing process. The generation of lower atmosphere thermal mixing occurs and mass is transported upward in the thermal process thereby raising the pressure at some altitude aloft over the land as opposed to that pressure over the ocean at the same altitude. Pressure lowers at the surface of the land with the loss of vertically-transported air along with the lowering of the density of the air due to the sensible warming. Subsequently this early, weak thermal mixing of the air results in a change the orientation of the initial pressure pattern placing higher pressure aloft over the land in comparison to a point over the ocean. Concurrently and, again, with far less change in the sensible temperature of the ocean (or large lake), the density of the air over the water is relatively unchanged.  With a density gradient at the lowest levels of the atmosphere from over the ocean to over the land, subsequently atmospheric pressure at the surface over the water is higher than surface pressure over the land.  As a result, an onshore (ocean-to-inland) pressure gradient develops. 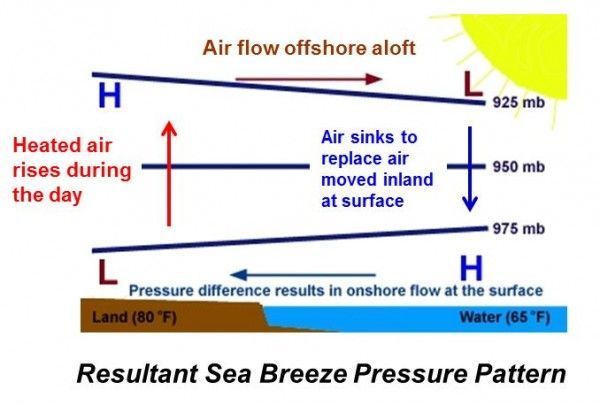 Empirical evidence shows that air movement can begin with as little as a 2 degree Fahrenheit difference in temperature. Thus, a thermally-induced onshore breeze is observed at the surface.  Since a sea breeze is a closed circulation, aloft the pressure gradient favors a return (although much weaker) land-to-ocean air flow. 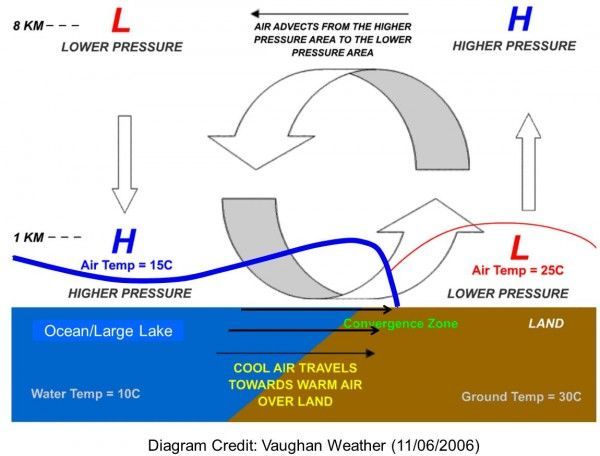 A typical sea breeze has its onshore wind flow beginning by mid-morning at the immediate coastline and reaches 20 miles inland by early afternoon. With incoming solar energy received per unit area getting stronger during the morning through mid-day, the surface onshore pressure gradient continues to get stronger and the sea breeze front continues to push inland with time passage through the afternoon hours (See Diagram #4: “Sea Breeze Inland Movement with Time”). 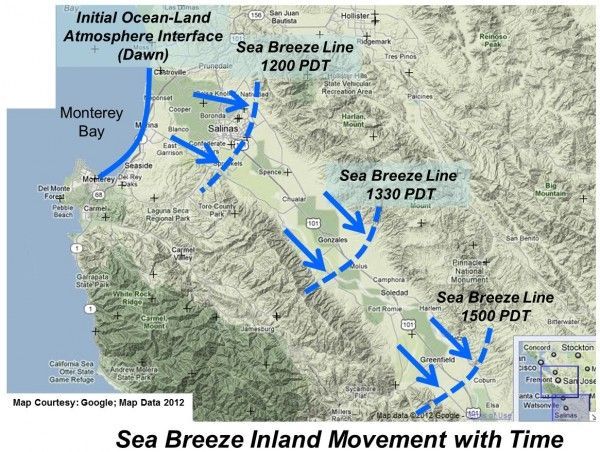 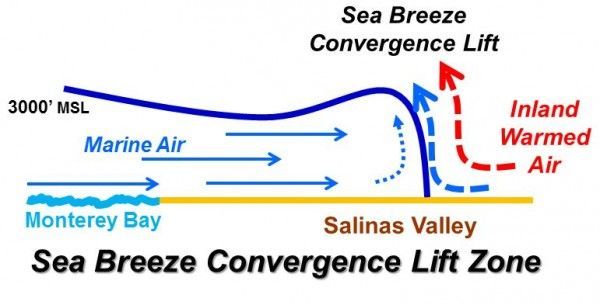 Some typical characteristics of a sea breeze front are as follows:

–       The rate-of-advance of the sea breeze is a function of the density difference across the front.  Typically the advance is from 4 to 8 knots but higher values reach 15 knots;

–       The temperature difference across the sea breeze front is often on the order of 15 degrees Fahrenheit over a distance of 20 miles;

–       The sea breeze has wind speeds typically from 8 to 15 knots with higher speeds up to 28 knots…especially near the coast;

–       Inland penetration of the sea breeze varies tremendously because of terrain features.  Inland distances, with questions also involving the definition of ‘maritime’ air, vary from 3 miles to 125 miles with the sea breeze circulation effects also observed 60 miles from the coastline over the ocean [Reference: Round].

If a pilot chooses to soar the inland moving convergence line, at least two negative soaring properties of a sea breeze front must be overcome should the soaring pilot decide to return to the departure gliderport:  1) A strong headwind in the maritime influenced boundary layer to reach the gliderport (See Diagram #4: “Sea Breeze Inland Movement with Time”); and, 2) A change to weaker or even total elimination of thermals to use for cross-country flight back to the gliderport due to the presence of cool air at the lower levels. This cool air advection behind the sea breeze front at the lowest levels weakens the vertical temperature lapse rate and provides a low-level “capping” temperature inversion at the transition from the maritime air to the general air mass aloft (See Diagram #6: “Sea Breeze Vertical Temperature Profile”). 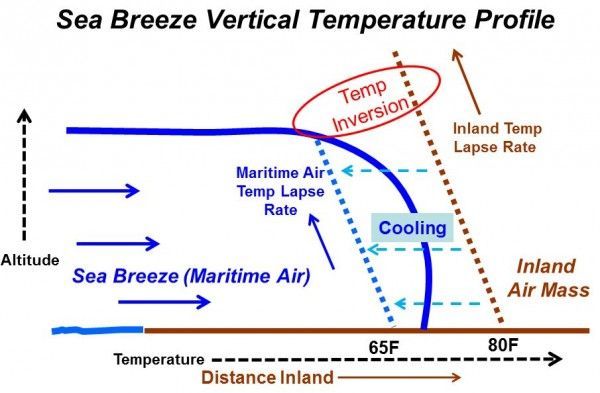 An afternoon weather satellite image of Florida clearly shows the influence of the sea breeze as it changed the resident land air mass with its thermal-generated cumulus cloud field to that of a cleared, stable maritime air mass along the coastlines (See Picture #1: “Florida Sea Breeze”). 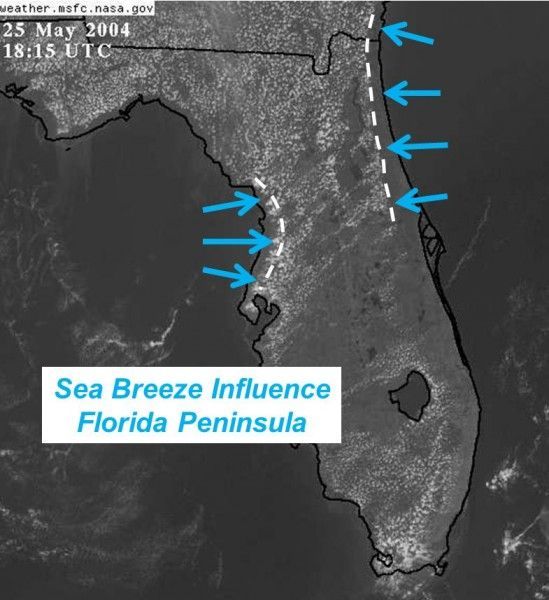 Depending upon atmospheric instability and moisture presence in the resident air mass ahead of the front, sea breeze fronts often result in a third negative property, the development of deep convection due to the initiating lift mechanism of the frontal convergence line (See Picture #2: “Southeast Texas Gulf Coast Sea Breeze). Whether it is truly marine air with its moisture content and reflecting the ocean surface temperature that defines its maritime origins or marine air that has become modified in its inland push and no longer has its initial marine moisture and temperature characteristics, the influence of a coastal sea breeze can be realized far inland. For example, local meteorologists do not consider the increase in wind speeds observed at Uvalde, Texas, around 11 PM CDT as the passage of a sea breeze front. However, the influence of a push of maritime air from the southeast Texas Gulf Coast sea breeze front results in the aforementioned action well downstream over interior, south-central Texas even if the air directly involved in that action is not ‘maritime’ in nature.  Interior convergence lines will be discussed in future articles of “Weather To Fly.” 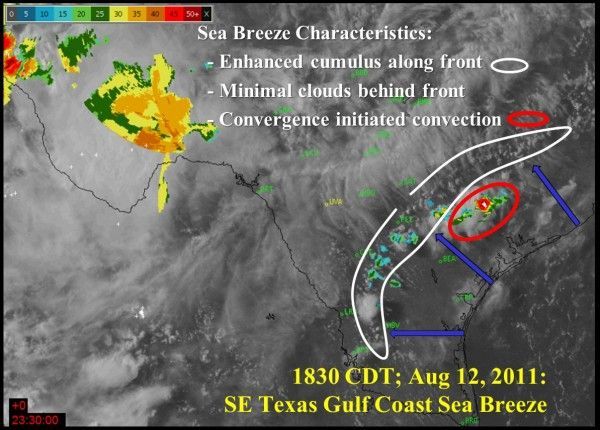 4 comments for “Weather to Fly: Convergence Along a Sea Breeze Front”