Heinz Weissenbuehler of M&H Soaring had a long weekend with an out and return from Elmira, New York to Manchester, Tennessee to fetch the Concordia fuselage,  driving over 1,800 miles and 26.5 hours. With structural work complete on the fuselage it is now time to enter the next phase of the fuselage construction–to finalize aerodynamic contouring and then painting. When building a prototype fuselage without molds, the final contouring is critical for achieving the full aerodynamic potential of the design. In particular, the contouring of the tail boom and vertical stabilizer to exact templates is most important, but the tricky part is to do so without adding significant weight in the process. Open class sailplanes with their long tail booms are inherently tail heavy and require nose ballast to operate within CG limits; the Concordia is no exception. Unfortunately every kilogram of excess weight in the tail necessitates four to five kg of ballast in the nose, so things can get out of hand really fast. With Concordia’s small wing area of 13.7 square meters every kg of weight is critical, so the pressure is on Heinz and a key M&H team member, Andy Brayer, to achieve design contours with a minimum increase in weight. Andy and Heinz made the same out and return from New York to Tennessee two weeks ago to spend some quality time understanding how we are going to meet the above challenges. Contouring of the Concordia tail boom will be a time consuming process of screeding layers of microballons and resin between tracks formed by templates at key fuselage and vertical stabilizer stations. 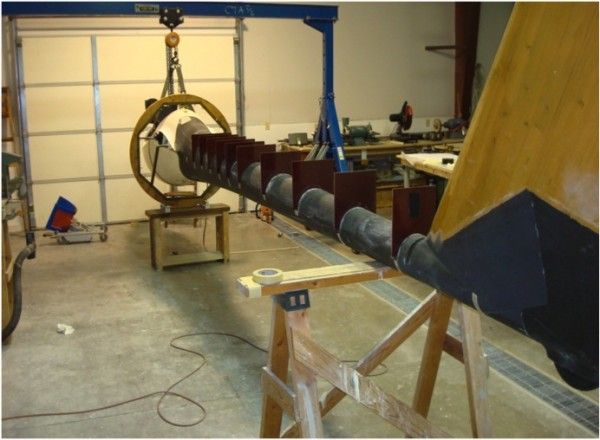 The vertical stabilizer also has templates with which Andy and Heinz will build tracks to achieve the exact airfoil contours designed by Johannes Dillinger. Andy recently graduated from college with a major in German and spent a year working with Schempp-Hirth Sailplanes in Germany, so he understands and grasps the full challenges of this task. If you have been following club class sailpane racing over the past summer you will also recognize that Andy is becoming a top notch competition sailplane racer. 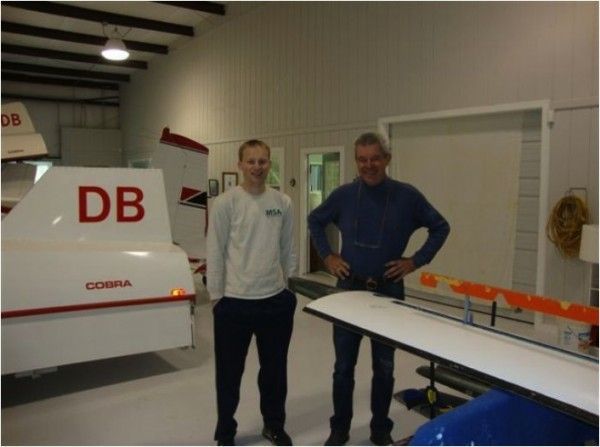 Andy and Dick Discuss the Project (click to enlarge)

The few hours that Heinz could spend in Tennessee last weekend were used fitting the fuselage into a Cobra trailer supplied by Alfred Spindelberger a few years ago. The trailer was first used for transporting materials from Germany at the start of the project and has been in storage since that time. When Alfred built the trailer, he had only a three-view drawing of the Concordia with rough dimensions, so a lot of fittings were left fluid at Dick’s and Gerhard’s request. As you might imagine, Heinz and Dick went into full retrofit mode on Saturday to get the fuselage and horizontal stabilizer secured in the trailer for safe travel to New York. 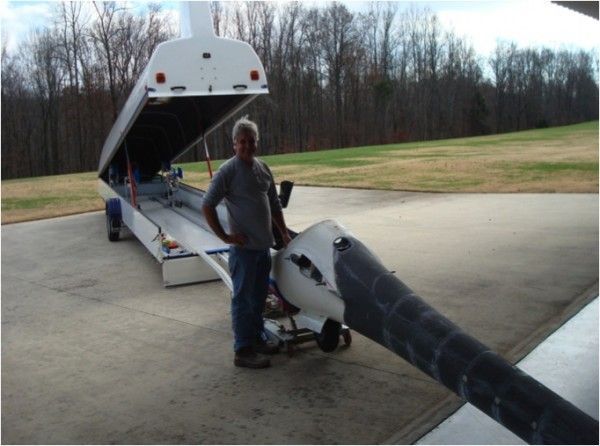 The contouring tracks can be seen on the tail boom starting with a separation of 0.5 meters in the forward compound curve region and increasing to 1.0 meter as the tail boom becomes a linear series of circular cross sections in the aft region. 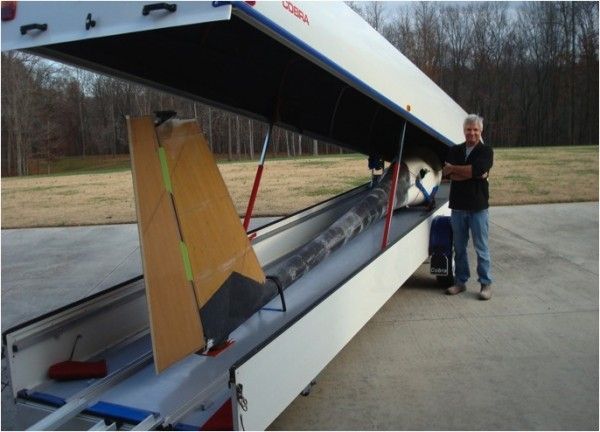 All’s well that ends well. Heinz departed for NY at 3:00 am on November 20th and arrived safely with Concordia in tow 13.5 hours later, proving himself a real “Iron Man.” Heinz is yet another example of the many people who have and continue to put so much of their personal energy, time and materials in the Concordia project.