Well, the Llano regional is history now, and it went out with a bang – brown grass, blue skies, white clouds to the horizon in all directions.  The task call today was a bit shorter than normal for here – a 2:30 hr TAT with three circles – in consideration of the awards banquet tonight at 7:30pm.  As it turned out, today had the best soaring weather of the entire week, although all five days were great.  By grid time we were already seeing clouds popping in all quadrants, and by the time the gate opened it was clear we were going to have a lot of fun on the closing day at Llano.

Out on course, we were getting climbs to 8,000 msl or so initially, and then up to 10-11,000 msl toward the end of the day.  There were some tricky spots, and if you happened to get low it was sometimes difficult to find a good climb – the wind was 10-15kt from the southeast and the thermals down low were pretty broken up.

Due to a number of circumstances, we wound up with one big Sports class here at Llano, and the contest turned out to be an interesting demonstration of the power of the U.S. handicapping system.  The handicaps here ranged from a Nimbus 3 with a 0.815 to my Ventus 2bs with a 0.88, to a Cherokee II with a 1.54. Do you know how hard it is to beat a glider that gets its speed and distance multiplied by 1.54 – its tough!!  In five flying  days I won three days  and Tony Condon (YYY)  in his beautiful Cherokee II won the other two.  Unfortunately he landed out on day 3 (the down side of a 1.54 handicap), but still managed to place 3rd overall!

Off to the awards dinner at the ACME restaurant (right next to the Lan-Tex theater on main street), and then tomorrow its back on the road for me, headed home to Ohio and my loving wife.  I have to tell you, this was a very well run contest, and we all should be thanking Dr. Gonzalo Echeverry (Gonzo, EE) who tirelessly promoted Llano as a soaring site and brought everything together as the Contest Manager, and Richard Schafer for giving  up a wonderful week of soaring to CD the contest.  The Fault Line Flyers really put on a good show, and I’m hoping they do it here again next year.  If you like the idea of 10-12kt thermals to 11,000 msl, with clouds to the horizon in all directions, plan to come out here to Llano Texas next year – I know it will be on my schedule for sure!

BTW, the Llano organization did a great job with overall trophies – something I haven’t seen at any other contest.  They created individualized plaques, with a photo of the individual’s glider embedded in clear acrylic (photo attached).  They had everything arranged so they could put the right photo on the right plaque at the last minute.  I know I’ll treasure my trophy from this contest, and I’d love to see more contests go this way. 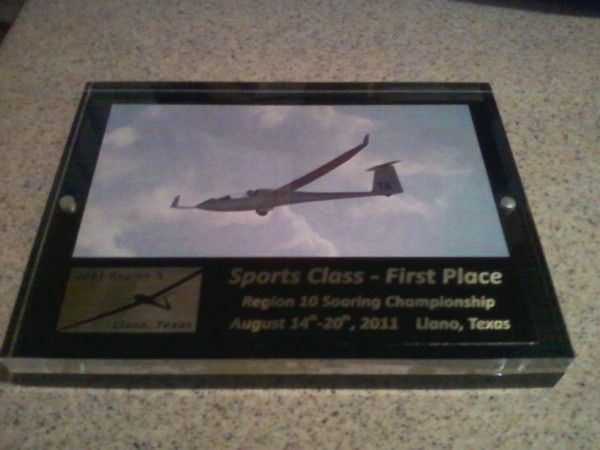 Llano was my 11th contest of the season, and because Fairfield was cancelled, the last.  The micro-castle gets put away in my garage for the winter (after some TLC), and my glider and trailer are also scheduled for some significant work.  After 11 contests in all parts of the U.S., all the minor dings and scratches and wear (on me and the glider) add up.   I’m ready for some rest and recuperation, with the emphasis on recuperation ;-).

God willing and the creek don’t rise, I’ll be back on the competition circuit next year, starting with the Seniors in March, then Perry in April (at least this year I won’t have to hang around on the waiting list for Perry – yay!), then Cordele and the other usual suspects.  I’ll have to wait until December or January to see what contests are where and when, and how I might fit them into my contest route.  In the meantime I’ll have to content myself with  flying  contests in Condor over the winter, and hopefully flying with some XC students too.

See you next year at the airport!