Under the Spell of the Lenticularis

[Editor's Note: On February 24, 2011, the soaring community and the world of atmospheric sciences lost a pioneer when Joachim Küttner passed away. Joachim was a bold, innovative, and indefatigable explorer of the atmosphere. His interests and contributions to science and manned spaceflight were wide-ranging and legendary. Wolf D. Herold, a sailplane pilot and atmospheric scientist, contributed this remembrance of Joachim's multi-faceted life].

He was already in his second life when he met his first mountain wave, above the Riesengebirge in the Silesian part of Germany. As he approached its sister in the American West, three lives were behind him.

Later he started number seven, when he embarked on solving the mystery of the mountain waves once and for all.

How many lives can one squeeze in a hundred years?

For Joachim Küttner this question was without meaning, for he followed his instincts, pursued his passion and lived the life(s) he encountered.

He started his first career in the early 1930's with legal work, but the skies always called him. He began to explore that strange up and down motion in the air and then moved on to testing heavy aircraft - from silent flight to thunderous motion he went.

That the atmosphere with its waves seduced him a second time was no miracle but rather a consequence of his curiosity. In 1951 he came to the Sierra Nevada with more determination and better equipment. From the cockpit of a glider he looked the monster in the eye.

Science gained new knowledge out of this and he an altitude record in gliders.

As if this wasn't high enough, he kept moving higher still; he helped Wernher von Braun to launch the first American into orbit.

After that he came back to Earth, back to science, that is. As a global mission he investigated the workings of the atmosphere. But lee waves and rotors didn't let him go just yet. Before he assembled another team to solve the last mysteries of turbulent and laminar flow behind mountains, he promoted a vision which he had about 50 years ago during his spectacular wave cross country flight of 600 km in an old training two-seater: to fly 2000km solely with the power of those wild winds.

A glider pilot at heart he endowed a prize for the first pilot to complete a straight-out wave flight of 2000 km. He was enchanted and surprised at the same time when his dream had been realized in a way he didn't anticipate. Shortly after he handed over his prestigious award to Klaus Ohlmann in February of 2004 he raised the bar again.

Joachim Küttner won't be able to present his prize for the first 2500km flight. He died on February 24 at the age of 101 in Longmont, Colorado. 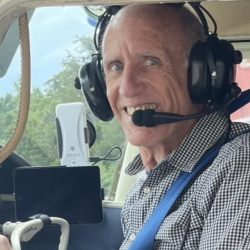