For over 50 years glider pilots from all over Europe have gathered in northern Sweden on the ice runway of Paittasjärvi lake, close to Kiruna city and the highest mountain in Sweden, Kebnekaise. Kiruna soaring club (http://www.sfk-kiruna.se/) have organized this event since 1961.
This movie is digitized from old 8mm films from 1967.

END_OF_DOCUMENT_TOKEN_TO_BE_REPLACED 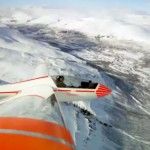 Every year since 1962 glider pilots from all around have gathered at the Lake Paittasjärvi near Kebnekaise in the Swedish Lapland at Easter for two weeks of ultimate wave soaring. The place is know for good waves from all wind directions except east and easterly wind is very rear during the spring time.