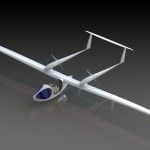 Richard Glassock, an Australian glider pilot and designer, has just announced a crowd-funding project for his ground-breaking and breath-taking six-seat sailplane design. Contributions will be accepted beginning March 27, 2013 (21 hours from now as I write). He has engaged Pozible as a vehicle for crowd-funding and has set a goal of A$5,000,000 in 90 days.