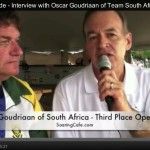 After the WGC 2012 closing ceremonies in Uvalde on Sunday, I interviewed Oscar Goudriaan of Team South Africa, who earned a spot on the podium for placing third in the open class. Oscar and his brother Laurens have represented South Africa in world gliding championship for decades and are obviously among the world’s very best glider pilots. It was a privilege to meet Oscar and to get his impressions of the brand new 21 meter JS1C from Jonker Sailplanes that he flew to third place in the open class. The JS1C is one of a new breed of open class gliders that reverses the decades-long trend in the open of incremental improvements and increasing span.