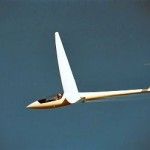 n the year 1999 I purchased a new ASW22BL after taking a leave from soaring for 15 years. The first shock I had in purchasing the ship was that it cost three times what my first ‘-22 cost in 1980, and the second was that it had basically the same performance. What I realized was that in the open class of competition sailplanes there had been no significant improvements in performace for the last 20 years, while the other sailplane classes had made significant performance increases from advances in both aerodynamics and structures.