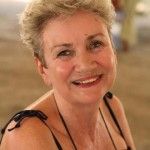 Ritz de Luy is well known in the international soaring community and has been blogging about soaring since before blogging was invented! When she started soaring in 1967, she had no idea that her soaring career would be very short. After about 50 flights in the Rhönlerche in two different camps, she went solo in the Grunau Baby and had four solo flights. When she flew one day with another instructor at another field, he asked her where the airfield was after some thermalling and she had NO idea! Needless to say, he advised her to stay on the ground. With no feeling for orientation—at all—it was the end of her career! She has, however, remained involved in “ground business,” as crew and the co-owner of a soaring “resort” for 10 years, as well as Dutch Team Captain, steward, juror and editor at several Category 1 FAI comps. Since before the word “blog” was created, Ritz wrote about her experiences every day after flying at the Sportavia Soaring Center in Australia, where she helped run a successful business from 1996 to 2005. Her first blogs on soaring.eu date from June 2006, and she has been blogging ever since, joining Soaring Café in January 2011. She says her experience as columnist for Gliding International and blogger for Soaring Café has enriched her world more than she can say and that her soaring friends keep her young and ”going”.

Ritz’s Posts from September 2011 to the present