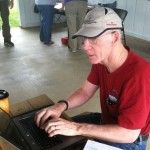 Dr. Frank (TA) Paynter started soaring in the mid-1990’s at Caesar’s Creek Soaring Club near Waynesville, Ohio and instantly fell in love with cross-country racing. He is author of the book “Cross Country Soaring with Condor,” co-author (along with Scott Manley) the popular Condor Corner column for ‘Soaring’ magazine, and is a regular contributor to the Condor section at SoaringCafe.com.  Along with Mark Hawkins, he is part owner of Hawke Tracking, the company that provides SPOT tracking services for contests and clubs. Before soaring came along, Frank was a national champion skydiver and still holds the record for the most number of consecutive dead-centers in skydiving competition. Frank has a PhD in Electrical Engineering and retired from a successful 25-year civil service career in 1993. He spent the following 15 years as an antenna researcher at Ohio State University in Columbus, OH, retiring again in 2008 to become a full-time soaring bum. These days, he goes to as many contests as his wife of over 30 years will allow, and spends his winter months racing and instructing in Condor.