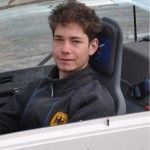 Benjamin Bachmaier is a gliding enthusiast, instructor, cross-country/alpine soaring coach and competition pilot from Munich, Germany, where he also studies engineering. Soaring is the central element of his life and he spends a lot of time learning, thinking, reading and writing about it. Benjamin started gliding in 2005 when he was only fourteen years old and has since logged more than 1500 hours of cockpit time and has flown cross-country tasks in over a dozen different countries. He maintains a blog at flugfieber.net, which he describes as the story of his soaring life. He also contributes to the German magazine, Segelfliegen. Dutch Blogger and Soaring Café contributor, Ritz de Luy, invited Benjamin to join the Café team, so now he shares his soaring experiences with readers in his column, “Tea with Two-Delta”.