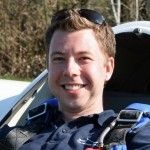 Helge Zembold has had a passion for flyting since he was little. His father was also a pilot and took Helge with him several times even as a child, so it’s no surprise that he started gliding at the age of 14. As a junior, he took part in various regional competitions and was a member of the German Sports Soldier Gliding Squad in 2001. He then began professional flight training at Lufthansa German Airlines, so gliding had to step back for a while. Helge currently flies the Airbus 330/340 as First Officer and goes gliding whenever his spare time and family (wife, two kids, dog, cat and horse) allows. His second passion is aviation journalism with a focus on general aviation and gliding. Helge started out doing public relations for his gliding club, which led to a job at the local newspaper—a perfect way to finance gliding while a student. In addition, he started writing for special interest magazines such as Aerokurier and Segelfliegen. Between 2010 and 2013, Helge served as chief editor of Segelfliegen, which is the biggest German gliding magazine, serving more than 5000 readers. He covers the European section of Soaring Café.