The Jones brothers are ” hot” in Finland! Some EUROGLIDE pilots only needed 4 days!

When you are normally ” sitting”  on the news,like I do,  certainly news from an FAI WGC, , it’s weird to come back home and to have NO CLUE ,what has happened. You can’t read quick enough to see who are on top and how many days they have flown.
Back from my one week holiday, without my laptop , I checked yesterday FIRST the WGC in Rayskala but also Euroglide .
Is n’t it SUPER to be part of the briefing via the WGC-2014-stream?Have you looked at it?

I felt sorry for the pilots and organizers, when I saw that the first days in each of the 3 classes had to be cancelled in Finland.The good news was that they flew 4 days!
This morning I read ” I can hear the raindrops on my tent” , so no good news either,  but …..an official rest day was set for today.Maybe not such a bad idea after  the International Night.

In the club class with 38 participants the first day was a bad one for our Dutch pilot Sjaak Selen. He got 79 points for the 30 km. he had flown in the St. Cirrus.
Zoltan Hamar from Hungary started pretty late, but won the 2.30 AAT with 169.7 km.in the LS 1f, with a speed of 61.6 km./h.. Only 16 pilots finished .
Day 2 had a 3 hour AAT and nearly ALL pilots finished.The German team had some great flights and Chrissie, one of the ” flying ladies” and wife from TC Uli and mum from little Fin, belonged to the top 10 from that day and even to the top 5 the next day.
After 4 days the German pilots Thomas and Chrissie are on spot 1 and 3 overall, with between them, and I announced already earlier that I expected a lot from him, Danish pilot Rasmus!! 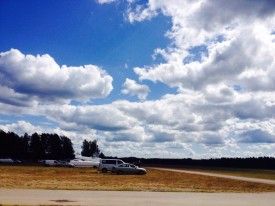 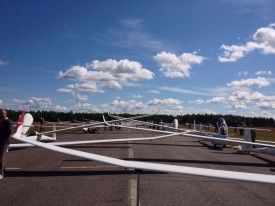 Day 4’s weather as seen by the Belgium team.

Next week more inside-news from this 33d FAI WGC in Rayskala.

Some pictures as shared by the Aussie team from yesterdays International Night. 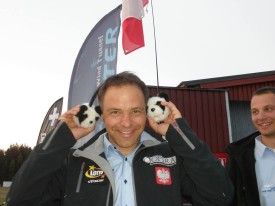 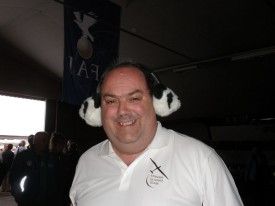 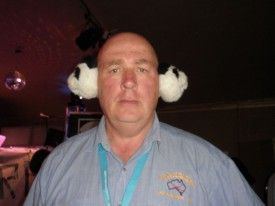 and by the Dutch team 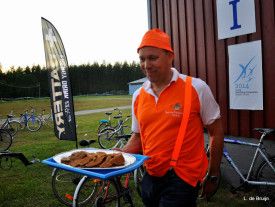 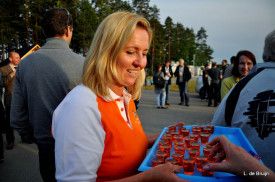 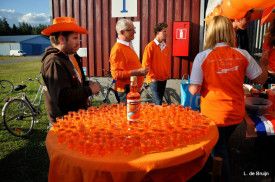 Dutch food and of course orange drinks served by Bas , one of the pilots and his wife Annemiek.
Courtesy L de Bruin.

EUROGLIDE is the success-story from some pilots from Eindhoven who years ago decided that not only comps are interesting but flying long distances through different European sates could be as much fun, maybe even more.This was  version 12 with lot’s of international pilots , who found their way to Holland as well.
EUROGLIDE is flown in 4 classes; pure gliders, low turbo’s , high turbo’s and self launchers.
As in comps from every level, the fraternizing in our sport shows best when you see each other every day but now at another field,  with crews following over more than 2000 km.
So many stories to tell!!! 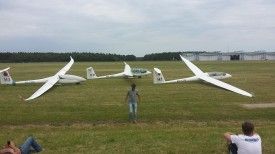 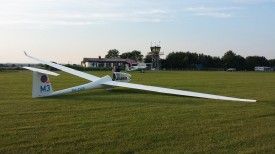 One of the Dutch teams flew 600 km. starting at 1.12 from Orleans St Denis de ‘hotel and arriving in Soest/Bad Sassendorf at 8.30 PM.
courtesy Jeroen Beeke.

As said they started on Monday June 23 and whilst sitting in the sun at our holiday resort not far from Venlo, we noticed some gliders , engines still on, during their departure.
They had to be back before July 5, BUT most of them are already back NOW!!!!
Some flew the distance in 4 days, whilst others still were enjoying the scenic views above France!!!
You could be part of it at home, by following the tracking system.
As one of the pilots said;
”  Four Days in the sky over a beautyful geography. We met very good, nice and gentle pilots in the air and on the airfields. We wish to meet you all in two years. Lutz Benner”

It was a not all ” a bed of roses” . Some were hit by hail and the car was damaged, the glider luckily was in an hangar in Roanne.
Some had problems with their car, others with the instruments in the glider.
Some had to wait after a fast flight, to fly to the final destination Malden, due to code yellow, meaning rain, wind and a possibility of hail. 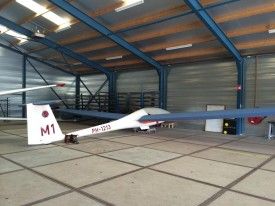 ” Txs M1 for all those great moments during our 2350 km’s last week. Take a well earned rest after your EG2014 win in pure glider class.”
By Bart Renckens.
The PURE glider team at Malden
Bart, Sikko and Hans. 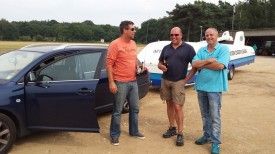 That’s it for today, more news next week when we know who will be the new WORLD CHAMPION in club standard and 20 m. dual class. A lot can still happen over there in Finland,certainly with this weather.
Till then!