My Most Memorable Flight

Memorable flights come in many packages. Some are memorable because they broke a record, others for beautiful scenery, still others were challenging due to the weather or interesting circumstances. By comparison, mine is memorable in spite of the usual criteria. It was not particularly fast, nor high, nor even unusually long. I can’t claim the typical measures of top performance. My average climb rate was normal to perhaps slightly low. The speeds were similarly unimpressive compared to most tasks. The flight occurred during the 2014 Region V East contest at Bermuda High hosted by Frank and Jayne Reid in Lancaster, SC. The contest blended the 15-meter and standard gliders into a FAI class. CD Frank Reid gave us a 2.5-hour MAT with 4 mandatory turn points, ending at the closest one, Pageland, some 11 miles northeast of Bermuda High. 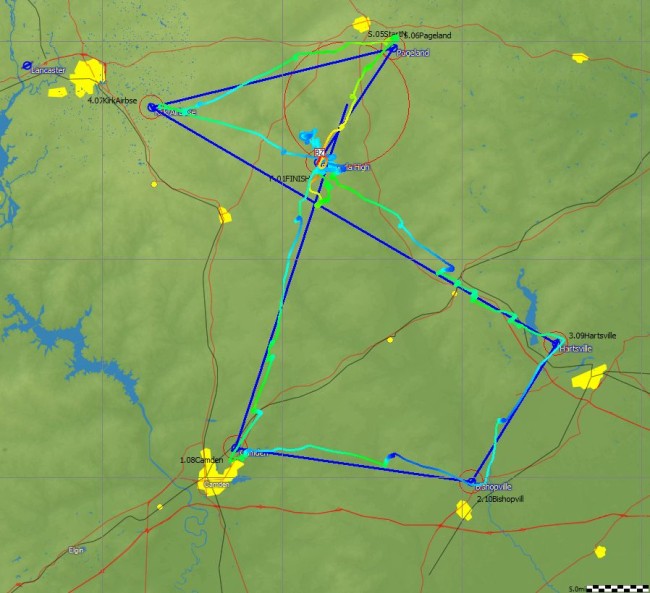 Allow me a small digression to mention that the flying at Bermuda High was great and the days with clouds were excellent.  Frank and Jane and their band of volunteers did and outstanding job, hosting us.  The food and service were exceptional. It will rank well in my memory as a great venue for a regional contest. The first leg to Camden had us looking up into a cloudless sky and running into a quartering headwind that was significant but not crippling. About midway to Camden, I thought my own effort was slow. Also, I was a bit concerned when I discovered that I was alone since I did not want to fly this task without other gliders to mark thermals. In past events, I found that flying alone in the “blue” spells trouble most of the time. To compensate, I committed to staying high, and I managed to find enough lift to keep me flying above 3500 ft most of the task. The second leg to Bishopville had more of a tailwind component but it was still slower because I climbed to almost 5000 feet by the time I got there. I wanted a lot of altitude, since the leg that followed took me over trees. My third leg track brought me near Bermuda High, which struck me as a good idea since it provided an out should I not find lift going to the 3rd turn point, Kirkland. When one of the 18 meter ships flown by Richard Maleady (TO) caught up with me, I figured that I fly really slowly. I envisioned even more gliders passing me before I finished. Nevertheless, it was on this leg that I became convinced that I would be under time even if I made it to the last turn point, Pageland and returned to Bermuda High. However, if I added a turn point, Kirkland and return, I would be over time. That prospect carried with it some trepidation since there were no intervening turn points that I could use should things go soft on me. I pressed on finding a nice thermal near Kirkland. I climbed a bit and left to make the turn, thinking I could return to the same thermal and climb again before heading out to Pageland. When I returned to it, the thermal was weaker so I did not get as much altitude as I had hoped.

I made it to Pageland but I needed a climb just to make it back to Bermuda High. The winds had increased and were directly on the nose, but I managed to find some lift. It was weak and I just limped my way back to the finish circle. Since I failed to find lift enough to persuade me to try to get to Kirkland, I elected to land at Bermuda High and finish 13 minutes early. At this point dear reader, assuming you have stayed with me this far, you might ask, OK, what did make this flight memorable? Imagine my surprise when Rick Sheppe, our scorer, came out to tell me that I won the day, my very first day win at a sanctioned contest. I may hold the distinction as the first contestant to win the day because he could not climb. After three years of flying contests, I have turned in a winning flight. In my view, my experience is testimony that flying in regional contests will make anyone better at flying gliders cross-country. If you are one that wants more from this sport, go to a regional contest near your home. I have written other articles that detail my thinking on the subject and I hope you will read them and talk to other pilots who do fly in regional contests for a better understanding of what it can do for you. So many pilots have encouraged me to go to regionals. The list is a long one but none were more supportive than Frank Paynter (TA), who has invested hundreds of hours in helping me understand better the art of soaring. My advice to anyone wanting to learn is to seek out a mentor who flies in contests and ask questions. BZ We want to thank John for submitting his Most Memorable Flight story. We’re sure you have a story to tell too. Why don’t you write and submit your memorable flight? — the Café Editors