"Staying HIGH was THE way to go!"

"Staying HIGH was THE way to go!"

5.30 – What a great day again! Sometimes a bit scary, then exciting, then just unbelievable … how do they do it? Ingredients today: fast pilots losing in the end because they did not take good lift in between, police to help Bruce get away from the farmers land he landed in, pilots “written off” but returning to the lead!
Here is the day for you if you had no time to follow it live. Enjoy!

11.AM: MIND YOU … bragging about numbers 1 and 2 does not mean that other pilots in this race are not “shining”. Flying such a race after getting “in” it, through qualifications makes ALL pilots TOPPERS.

I mentioned Bruce and Nicolas this morning in blog 1, because the enthusiasm from yesterday’s flight was still in my veins and, to be honest, they made the show…or not? Though the race for spots 3 through 10 was exciting as well.
It’s NOT all about the points. Pilots love flying in Sisteron and the camaraderie they share with their fellow competitors. It is a fierce competition and one mistake can make the difference.

I got some info from Piotr on Sebastian about day 4 (and thanks for that Piotr!).
“Sebastian writes in his blogs that the Grand Prix rule of max 50kG/m2 wing loading (introduced after Diana-2 was designed) prevents him from making the most out of his glider (designed for 56kG/m2); he flies with only 90% of the maximum ballast.”

“Sebastian commented (sebastiankawa.pl) that in some stretches the lift looked iffy to him, so he purposely flew conservatively (higher). It turned out pricey.”
Normally Sebastian is very consistent, but yesterday he admitted he made a mistake.

I know you have seen a lot of info from my Aussie mates. All other info is OF COURSE WELCOME TOO. You know that!
Here a nice picture of “my”  mates. 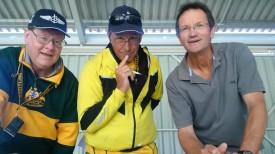 Tom, Graham and Bruce ready for day 7, and it looks as if they know what they are going to do.

Let’s look at day 7. Another LONG flight, this time over 300 km To be exact, 307.8 km, going north first then west, a longer leg to the east (76 km), the same distance back to the SW, then to the SE again, then up NW again to pass the check points S to arrive back at Sisteron.

Before the launches, all were in a great mood, as Bruce and Anita shared on FB:
“Lots of laughing on the grid this morning … What will happen next? In wishing Sebastian a good flight, he says. ‘Today I think I follow Bruce.’ I suggested that this was not a good strategy. Perhaps today was another zero day for Bruce! We’re having fun, zero or hero, either way!”

That’s the spirit! And how true it turned out to be!

At 1.00 PM the gliders were launched. It was Uli’s time at 1.19, so he went up in glider LX. I found a nice picture of Uli, who ALWAYS seems to be in a good mood—and of his car—always good PR! 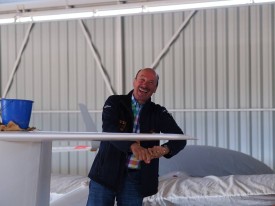 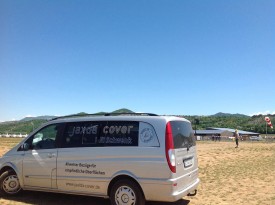 Uli … even cleaning the glider makes him laugh and his car full of PR for his Jaxida Covers.
Courtesy Aussie team

A bit later, Tilo (VV) and Nicolas (BW) were launched. Sebastian went up at 1.28, while nice high white clouds decorated the blue skies. It seems they worked as the tweet said that some pilots were already at 2000 m.

So it looks like another fabulous day there in Sisteron. Though one of the messages at the Aussie side said, “Cu forming. Wind more westerly, storms(?) building to the southeast (like on the forecast?).”

Shaun informed us that indeed he could see thunderstorms building up. But on the other hand some pilots “use” them. 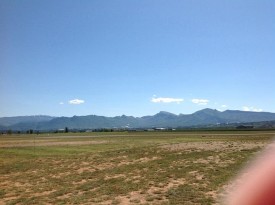 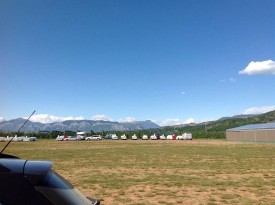 2 PM – The line opened at 2.20 and Brian “did” it today from the air in Tilo’s ARCUS. Brian was the sniffer in this glider and stayed up to open the race. Of course what we see on the tracking system is 3 min later.

Pilots went east and west of the track. Half the fleet goes over the mountains. Plenty of clouds and the “mountain group ” with Laurent, Sebastian, Mike, and Nicolas races to up to 2000m to the TP, while the others merge in close in front of the TP.

Tom leads the other group with Uli, Kai, Roman, and Rene. The West group was faster in the end. Tom rounds the TP first. Sebastian, Laurent, and Nicolas first climbed up to over 2000 m before rounding the TP.

2.50PM – Still windy from the NW. Tom flies all by himself, maintaining his altitude while racing to the next TP and still in the lead by 3 km. According to Brian, cloud base is 3000 m ( max height is 2300 m for the pilots!) over the hills and much lower in the valleys. All pilots pretty much spread out in front of the TP. Just before the TP Giorgio flies faster at 1627 m to reach the TP first, just ahead of Tom, Kai, Roman, and Didier.

The “climbers,” Sebastian, Laurent and Nicolas, are behind but much higher at 2200 m, and they tried to convert their height into straight line speed to join in again.

3.26 – Tom keeps pushing but Brian said he needs 500 m to get over the hill, but … pfttt … he found some good lift! He is still relatively low though. Giorgio and Bruce took the northern route while others stayed behind, but are much higher. Going more southerly later – that’s where the thunderstorms might be. Hope it will not have any influence on the pilots being either early or late.

3.36 – Bad news for my Aussie mates; Bruce outlanded. He was OK.
He landed at a farmer’s place, but the farmer was NOT pleased to see him—a bit of a problem, and I have seen that before. They even had to call the police, but just after 5.00, the Aussies were on their way to get him and the glider “out of the hands of the angry farmer.”

Giorgio, who was with him, is all by himself now, but he had good lift and is over 2000 m. Something like that happened to Bruce and Didier yesterday. Bruce flew 100 m higher to the first good cloud; he continued and won the day, while Didier had to land. Today Giorgio continues and Bruce—a bit lower—had to land.

Tom in between did not have enough height to jump over the snowy hill and had to find lift … climbing up to 1800 m. Didier HAD height and joined in. Giorgio came all by himself to TP 3. Didier had an advantage on Roman in height, but Roman was first, then Giorgio and then Didier.

3.50 – The new leaders are Didier, Giorgio, Roman and Uli. TP 4 was next and Didier and Uli were in the race to be first there.

4.18 – Uli, at 1740 m, had a good climb in front of the TP with Tilo behind him. Good day till now for the German pilots. Each of the four flew with the leaders or were leading themselves. And … not written of  …Tom is back, not upfront but not too far away.

Didier passed the TP neck-and-neck with Uli and Tilo. So in the end it was better to get height instead of pushing on today.

4.40 –  Four in the lead with OK-height: Didier, Uli, Tilo, and Tom and a bunch behind them—around 10 K—with Sebastian, but higher!

Even 100 m higher makes a big difference again. The wind at Sisteron is strong, 15 its, and a bit more from the west. But also small clouds are visible.

Tom is pushing hard again and low and there is 300 m height between him and Didier. They must keep in mind as well the minimum 50 m finish height above the airfield and include sink in their planning.

4.53 – They pass a gap in between two mountains, for Uli and Tom too low according to Brian. Giorgio follows as well, but higher.

In the end it is Didier who, depending on penalties etc., wins the day, followed by Tilo and Uli. Good on the Germans!

Then Giorgio, Tom, Roman, Rene and Sebastian, and later Nicolas and John.
All preliminary!

WHAT A DAY AGAIN! Look for the final scores at www.soaringspot.com
They flew 307 km in 2.34 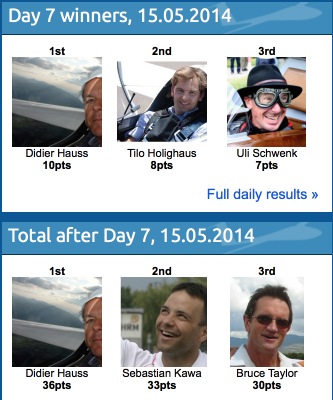 That’s all for today … CU tomorrow