9 AM – What an amazing and exciting flight it was yesterday between Bruce and Nicolas. A farmer from the East Coast of Australia (NSW), used to flying over flat country, suffering from a bad drought last year, and an instructor from St Auban in France, used to the mountains and blessed with the skills to fly them. Loved it. The red and blue tracking lines shooting as rockets over the virtual landscape with mountains ridges, lakes and valleys, was a bit scary but also breath-taking. They truly deserved the 10 and 8 points and showed how spectacular our sport can be.

Having said that, it’s better to let Bruce speak. Sorry, I have no comment from Nicolas; otherwise I would have shared that OF COURSE too. “Just a good, steady day today. I started well and was right with the fast crowd, then a bit in front until I flew to one of those hills that “always” works and found nothing. Not to worry, I carried on behind about 7 others until they made a fairly serious mistake heading south, by missing a crucial climb as we headed out into the flat. Things worked out unexpectedly well down there for me, and the rest of the flight was straightforward over ground that I know reasonably well. The air down low on the ridges was even rougher than yesterday – pretty sharp-edged and not really pleasant. I am very pleased with how the day went. I would like to add some comments about all the help I have had from my good friend Arne Boye-Moller. Firstly I am flying his pride and joy, an especially well-kept Ventus 2CXT, which has given me absolutely no trouble at all, and seems to go quite nicely. Arne drove it all the way down from Denmark for us, a trip of some 1800 km. As well as that he has lent us his car, and will drive the whole rig most of the way home after the event too. For an Aussie to fly in Europe, the bureaucracy is mountainous, and Arne has spent quite some portion of the past few months helping to get all my papers in order, from the Danish end. Anita and I are so appreciative of what you have done for us, Arne; a truly special effort. And now you have to watch the race each day as well! Tomorrow is another day… As always the GP is such a cut-throat game, anything could happen, and probably will.”  And here is Tom as well. “Day 6—another great day today. Good start, playing it very safe so surprised at 1m high start. Bruce had a beauty, getting a climb at the right time off the ridge while I led the pack down to the trees near Puimisson. For some reason I get out in front, not by choice as I know I should fly with others. The funny thing is a bunch of great mountain pilots follow me! After we were struggling for some time I was with a Diana, wow, Sebastian Kawa: over the radio comes a laconic Polish voice, ‘We are in deep shit!’ I replied ‘Yes we are!’ “

We slowly went into the blue sky flat country but there was plenty of light lift along the river slopes leading past St Auban. Once into the hills again it was ridge running and rough as. I gave myself a couple of moments down low as the wind was a bit variable around some spurs. A bit of confusion around the Nth Eastern turn and I saw Tilo and an ASW veer left above me so I went well right. Similar timing home so hard to say which worked. On the final ridge run Carlos Rocca from Chile passed me but had a start speed penalty so I squeaked in 8th for 2 points. Graham only had a short day unfortunately being not able to make the first ridge. Great dinner by the Taylor’s hosts. Will see what the last two days bring.” – Tom It was not the day for Sebastian and Didier yesterday. With zero points, they could not extend their lead, but … Sebastian is still in the lead (31 points) after six days. ONLY ONE point ahead of Bruce (30 points), so the “heat is on.” In the race as well Didier, now with 26 points and Uli and Giorgio both with 22. 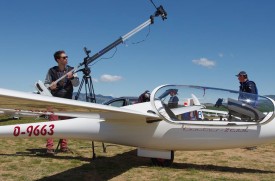 Back later for race 7 with one day to go. Cu later … Ritz