5.30: Back home from Amsterdam, but TOO late to see the finishes; they were early today! I noticed that Graham had won by a nose on Mike. He won by a hair’s breadth. EXCITING!
In points the difference is more–TWO!

A photo finish was necessary. Giorgio arrived after two minutes and was third.

Giorgio had a real good day as well and is on spot 3 now overall with 16 points, while Sebastian leads with 24 and Didier follows closely with 22. All scores are still preliminary.
AND … it is not over yet!! 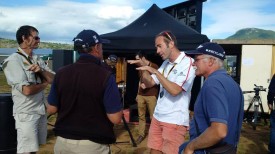 Mike was hoping he’d get some lift on final glide… alas.
Both picture and text;Courtesy Aussie team 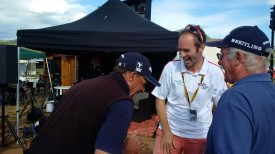 Yes, I didn’t think you’d feel guilty about passing me on final, Graham!

Both Graham and Mike spoke about their race after their flight, in the sophisticated black tent.

Nice that they show the prize giving at the end of every day. I just saw that.
Bottles went to the three boys and a painting from a local artist is an extra gift for the winner. Every day this artist makes a new painting for the daily winner. Congratulations guys! 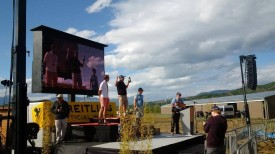 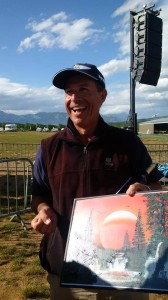 It is SO good that the GRAND Prix contributors, twitter every little news item. Perfect!
I even could see the finish on FB!
But then I had to read the 80 incoming messages, tweets etc. so I picked up some pictures and the message that more tugs have arrived from St .Auban to help out with the launches.
The rest you know already when you followed it.

My blog is more for those who are not able to look or follow it live and this way still know what’s going on. 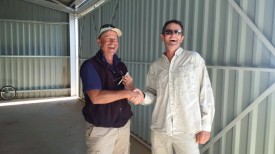 Yesterday it was Bruce who sat in the commentator tent, then still a bit anxious if the strong sink on the finish line had not damaged his hope of getting the first podium spot. 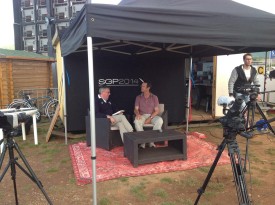 It looks like he shouldn’t have to worry, as only two pilots had penalty points. They seem all in the GP rules groove now!

It is amazing to see that in such a compact area, where they could see each other all the time, there still is so much difference in speed:140 km/h and 93.7 km/h.

It was as they said; some clouds were really good and you should stay under them rather then following the mountain line. Choices, choices, decisions decisions!

But when you read the stories about yesterday from Bruce and Tom you find out a bit more about those differences.

Here is the daily comment from Bruce after yesterday’s flight; Mind you after a long day at the field with stress, etc. on the final glide he still sits down to keep ALL of us informed. Good on you Bruce!

What can I say? Today looked so impossible when we woke up, with steady rain, which was still falling at midday. But things change quickly in the mountains. Out came the sun, up came the wind and the race was on. I felt completely comfortable with what was happening today and understood the conditions in front of me. However, the day was not without any hiccups, as the climbs pre-start were weak, and the time to gain height was shorter than on previous days. Of course a group of us finally found a little thermal just as the start gate opened, so we stayed in it till quite sure of making the first ridge at a safe height. By the time I got to the ridge there was a group of half a dozen gliders well ahead and higher, but ever so carefully (by means of pushing the stick forward) I rounded each one up, except for Sebastian. To those for whom this name means absolutely nothing, Sebastian Kawa has won so many world championships all of us have long since lost count. We played cat and mouse till the finish… He would gain height on me, then I would get it back, then again. However, the run home went my way, and it was a great feeling to cross the line first… More relief than anything. A good, honest day of fun. There have been so many well wishes and comments, I want to thank everyone for the support.”

And this is what Tom had to say;
” Fantastic day for Bruce yesterday–he used his skill and experience in the area to great effect to stay in front of the mighty Diana 2 of Sebastian Kawa.Unfortunately I just could not climb before the start, and did not see anyone else very high. The start gate opened too early for me and a few others. (Even though it was then 1650!). Graham was last off and only had about 20 mins to climb. After starting very low over the valley with the water taps open I got a climb that I took very high as in front I could only see very low gliders on the ridge ahead. What I didn’t realise is that the wind ahead changed direction onto the ridge and they were low by choice! By the time I figured it all out the leaders were way ahead and I had no water, I was happy in completing the second lap on the ridge and being able to do it faster than a couple of guys who still had water. Today should be better.”

I don’t know if it was better for him today, as he is not yet scored.

Not much more to say as everything  has been said which is perfect!