10 AM: It’s raining in Sisteron but it should clear up and they still expect / hope for “a day” as the forecast is for better weather around 2 PM.

I admired Bruce yesterday. As you have read in my blog, he flew most of the short, difficult and slow race alone. Here is his story:

“Such a difficult day today. Right from the beginning the weather was not happening, and the task was changed twice down to Task C before we got away. Heavy high overcast kept everything slow to heat, or to be more honest there was no heating until very late in the day, until well after we had started. 100 km was a big struggle… Just after I started, I realized that I had actually missed the start line (due to finger trouble on the flight computer, or old age, one of the two) but to return would have meant a certain landing, and I thought it might be fun just to do the task anyway. The were long periods of waiting for the sun to come out before you could proceed, and many other times of experimenting with the very light breeze and the lowering sun to find a slope that would give some lift. Finally I needed just one more climb … which did not eventuate, so I flew home anyway. Margin above final glide was nothing, and it was very low and slow all the way to the finish. Strangely enough, quite a satisfying day.”

To put such a lot of effort in when you fly with the disappointment of having missed the start line, you are THE BEST.

Graham keeps a blog as well and you can read that at http://grahamandmark.blogspot.fr/

The winners from yesterday flew with a speed of 65 km/h and that needs no more words, certainly not for a speed competition! But it was already amazing that pilots FLEW the task.
Didier was the best of the seven pilots who succeeded in staying airborne AND finished. He received for that 8 points, while Roman got 6 and Sebastian 5 points.

Giorgio and Thomas both made it home as well receiving 1 and 2 points for all their efforts.
The 3 points were for Rene and the 4 for Gintautas.

After two days Didier leads with ONE point on Sebastian. 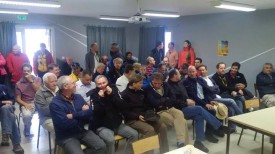 During the briefing yesterday (picture above and shared by the Aussie team), they had time to present art from Katrin and she was allowed to talk about her beautiful colorful art as well. The runner-up prize during this competition is one of her paintings signed by the pilots.
Pilotessa Design-com is where you find more news about her. 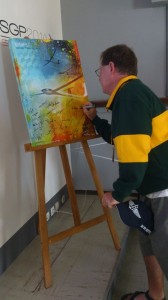 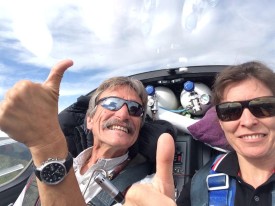 Tom signing as all other pilots. Great idea such a prize! And … not much later she flies around with Klaus Ohlmann. Pictures courtesy Aussie team and Katrin.

… AND some great pictures by Tom Claffey whilst flying—Love them! 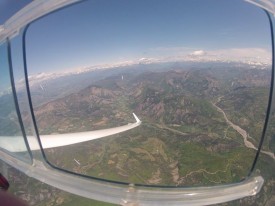 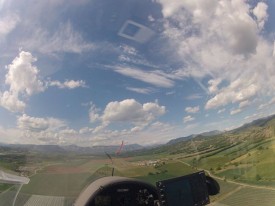 In the air and during finish 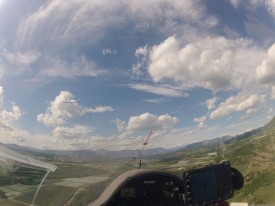 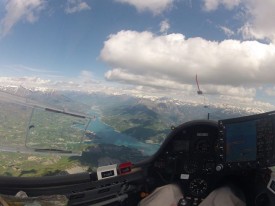 Courtesy Tom
Picture 1: On final glide behind Tilo
Picture 2, Day 1 – Cloudstreet to Morgon mountain, I was following Aboulin but he made a mistake and I got in front – then didn’t know what to do! – Tom