HELLO, from Alphen where it is wet, gray and windy—more autumn than spring.
Splendid weather to follow the GP-ACTION on my laptop in my warm study, though I must admit that I miss the action at a field, the interaction with the pilots, crews, organizers and locals and just a shout “Hi Ritz!”

BUT … there is a lot of interaction on FB as well and on other media. I liked the comment from Jill McCaw, well known from the Kiwi magazine Soaring NZ, about the benefits of the Internet:

I would add, the ability to watch the telemetry of a glider race, on the other side of the world, as it happens…which equals being part of a world wide community, discussing, commenting, and cheering, as if we are all at the event.

Let’s look what the weather is for Sisteron today. Yesterday they were spot on.
High cirrus was the key word for today with a bit of sunshine forecast for later in the day.

The organizers set a 226.9 km task for today, direction W, S and E. via five TPs and check point north to finish at Sisteron.

Hopefully Bruce will be his own old self again after a bug. I always love his stories on Taylor’s Gliding Place and this morning he sounds a lot better:

“Sorry, I have not been good at story telling. A few days ago I fell victim to some hideous stomach ailment, which resulted in my becoming far more familiar with the toilet porcelain than I really needed to be. I missed a couple of days flying, whilst the weather was rather crappy anyway. Then yesterday, Day 1, I fell into the cockpit feeling a bit like a wrung out dishcloth. Luckily the weather was much better, and I didn’t have to struggle too much to get around, though I was well and truly off the winning pace. We did a small lap of our playground, but not into the high mountains. There was some north in the wind, which means that the rocky slopes facing the sun (which is in the south up here) don’t have the breeze blowing directly up them. Instead of working all the way along, the slopes tend to only produce thermals in some places. So instead of blasting along near the rocks, it is more of a climb and glide exercise, like we normally do in the flat. I was by myself most of the day, shepherding the tail-enders along. Hopefully today I will have some more spring in my step.” 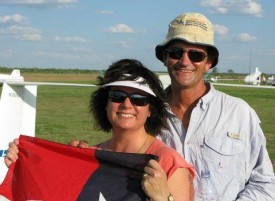 Bruce and his lovely wife Anita at their best.

And good luck for Mike, who replaced Andy Davis, who had to withdraw from this final. It hurts when you know you could have had eight points on day 1 and … although it sounds hard, you can only blame yourself.

And for Tom who lost 300 points by missing a TP as he wrote yesterday in his blog.

And for John who lost nearly 100 points because of his finish altitude.

Great to see though, how KIWI John Coutts, who lives in South Africa, is cheered on by his South African mates. Good on them! 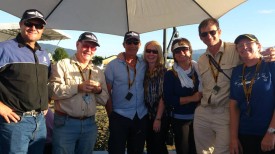 The Aussies, together with John (NZ) to the left and Swaantje (Germany) to the right.
Courtesy Kerry Claffey

Day 2 was supposed to start not before 1 PM, but due to the weather, it was delayed till 3 PM local time. As the weather had still not improved then, the organizers set a new task, shorter and not too far from the field. We could see a lot of high cirrus, better said overcast, which kept the temperatures low. 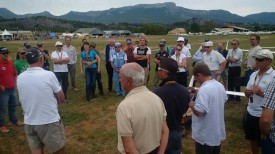 New briefing at the grid

New launch time: 15.30 PM and five tuggies brought the gliders up in the air. We could follow it on the video as Mike, Carlos, and all went up. But a few gliders returned to the field; we could see WR – Robert (Germany) , VV – Tilo (Germany) and XY – Gintautas (Lithuania). They all got a reli-ghts straight away.

The start line opened at 16.45 (my clock said 48), and even 104 km looked like a huge challenge. Two Groups had formed and after crossing the start line, they flew straight back to the mountains and then were supposed to go over a valley. The first TP was 27 km away. On that “road,” there should be a small window of better weather.

As Brian mentioned, they had changed the task twice. It was a tough call if they could fly – yes or no.

Uli flew away straight to the first TP, but got lower and lower—at one stage just over 800 m—but according to Eric who is helping out the three French pilots in this race, there is a nice field there.

Some pilots did not have enough height to go over the top and flew back. Finally blue skies arrived and it got warmer, so circumstances improved a bit, with a bit of valley breeze as well. BUT … it looked like Uli had already landed in the valley.

At 5, there were pilots at 1500m and others at 700! They needed lift to get over the mountains, and it took a lot of time to gain enough height to get over the crest. So a very slow start for the day.

In between, Aussie pilot Tom landed on a small airfield “safe and sound.” Also French pilot Nicolas and Chilean pilot Rocca landed somewhere. Some flew back to the field.

Would the best pilots of the world be able to fly the task!? Patience is the key word!

Mike left the ridges and flew via the valley at 1000m, but in the end he had to go back to Sisteron. Kai had landed and Tilo was on his way back to Sisteron. A group with Didier (at 1600m): Sebastian, Thomas (1660m) Rene, Gintautas and Roman found some lift at 5.23. It was the best climb of the day.

People on the ground called it a day “to bake cake at home,” or “to mow the lawn,”  while Bruce worked hard and climbed all by himself up to over 1500m. “We still might have a race,” was the happy hope, when Bruce was on his way to the TP and was the first to turn it and fly back to the ridge.

At 5.30 the “group” was high enough to go to the TP as well. All went back to the ridges they just left and that had given them lift.

Bruce went well with the group and Roman, who had a bad day yesterday with an out landing after 22.4 km, led the pack but 300m lower, to the second TP.
After that he left with Sebastian to cross the valley.

Roman raced ahead alone finding lift on the next ridges up to 1800m. Bruce was also alone but not so high anymore, though he had lift up to 1500m again.

At 18.00, the weather improved even more and on the way to the next TP,  they had a tailwind and Didier was the first to turn the TP. With one more climb and using the slopes, they would be able to fly “home” then. Most were at 1300 at that stage with 25 km to go. At least eight were still flying then, maybe 10, so all would get points in that case.

18.20: The finish line, with a minimum finish height of 50 m, was passed first by  Didier who was confident he could make it. Roman was not too far behind him,  then Sebastian and Rene. Bruce was still struggling to get enough height to finish.

Time for dinner now. For the scores you can go to www.soaringspot.com.

Till tomorrow in the Café, or maybe later, depending …

By the way my regular blog on Sunday on Soaring Café will be on www.soaring.eu Just to let you know.