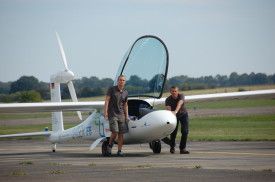 The 2013 Green Speed Cup, the third of its kind, was a great coup for the electric-powered e-Genius: Klaus Ohlmann and copilot Ingmar Geiß, Deputy Project Manager of the e-Genius-project, won the Cup, flying the peculiar looking ship. They scored four times more points than the second placed team! Actually Stuttgart’s Institute of Aircraft had developed the high performance, electrically powered, two seated aircraft “e-Genius” to participate at the NASA/CAFE “Green Flight Challenge” 2011 in California. This unique aircraft is obviously well able to outscore the participating conventional planes and motorgliders.

Phillip Scheffel, who organized and flew the contest in Strausberg with a Stemme S15 explains: “The European TV-channel ARTE filmed us during the three days. It’ll probably raise the public interest for the Green Speed Cup so this could become a regularly watched event in general aviation. Soaring Café asked some additional questions:

Phillip, can you give us some personal impressions? How was the weather and what was the atmosphere like during the contest?

We had two days with good weather and some very professional teams competing, but they never flew against each other. Everybody worked together to work out the best strategies to fly fuel-efficient. Of course the evenings around the campfire where Klaus Ohlmann, Markus Scherdel and all the other experienced pilots and engineers met to exchange their experience were very helpful. Also during the daily pilot’s meeting there was room for further discussion. Everybody had positive feelings about the event, and they will probably all be back next year. We would like to see the Green Speed Cup grow to establish an ongoing evaluation of different aircraft. 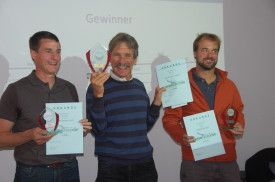 How could Klaus and Ingmar score so many more points than anybody else?

The e-Genius team was flying the only electrical powered aircraft in the competition. The effectiveness of an electric engine is three to four times higher than the conventional engine’s efficiency. On the first contest day it used an average fuel equivalent of only 1,7l/100km (0,83gal/100NM). That’s why the ship performed so well. Everybody was amazed and complimented the design. The e-Genius is the world’s first electric aircraft to be suitable for “daily” use.

Winning team and winning machine: Was it a perfect harmony, was the weather supportive? How would you interpret the victory?

This victory is obviously achieved by the aircraft. However on the first task it was evident that Klaus Ohlmann and his professional team from the University of Stuttgart were really well prepared: The task was meticulously planned, and without considering the route as well as the altitudes to fly the outcome would not have been the same. Co pilot Ingmar Geiß and Len Schumann did a great job working (in the background) towards the e-Genius’ success. 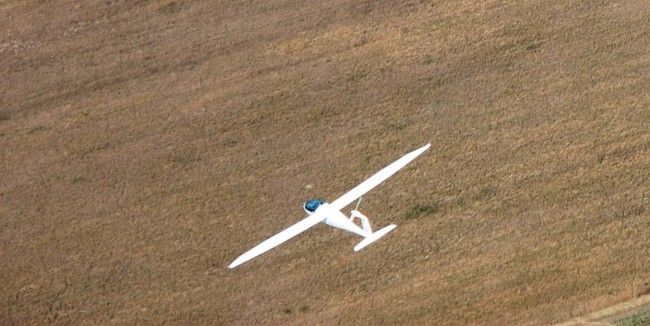 The e-Genius webpage explains furthermore: “On this first competition day another range record was set for e-Genius, covering a triangle of 404.9 km in 2 hours 40 minutes and landing with a 30-minutes reserve. Weak thermals (~1 m/s) and a constant wind (25 km/h, head- and tailwind) underline the performance of the aircraft.”

Can you explain a little more about the fuel-use in comparison with pure soaring? An aero tow behind a Pawnee costs some gallons, and a self-launcher also needs some liters of fuel before finding the first thermal.

During this contest we use “pure soaring” only between periods of engine use. A good combination of both flying options is the key to success. For example, you would never fly as far down as during a cross-country flight with a glider because you might risk to leave the area of best tailwind. The engine is switched on more often during the task, continuously supporting the soaring distance. Depending on the conditions the flight log will either look like saw tooth design or have a more dolphin-like style. I think this kind of travelling through the air is more a touring-glider style. But nobody would usually fly this way… Such a flight is much faster than soaring cross-country and it uses much less fuel than a powered trip.

Not really, we do have a number of motor gliders in the competition, but we are more focusing on comparing fuel efficiency, looking towards general aviation. The main question is how to travel efficiently from point A to B. Green Speed Cup contestants are allowed to use any aircraft equipped with up to four seats. So besides the “classic” auxiliary powered gliders this year we also had a DA-40, an SD-1 or the RF5b participate in the contest. 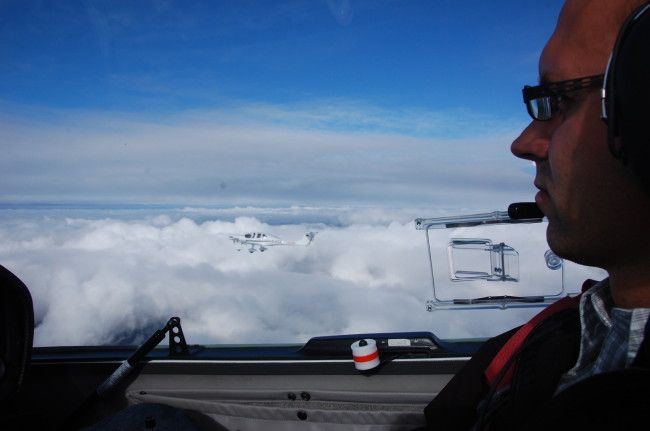 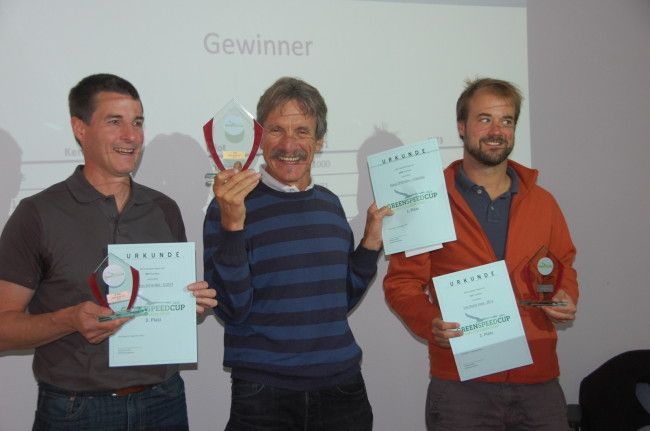