After four wet days the sun finally dried the thick clouds over the Wasserkuppe. During the 10 am pilots meeting the task was set: 219,8 kilo­me­ters, staging at noon. At 1.30 pm everybody was up above the airfield, first struggling, but the 20-pilot crowd could stay airborne. When I opened my laptop at 6.30 am mountain time in the United States (2.30 pm in Germany), the latest blogger message told me that the first gaggle was already about to pass the third turnpoint (Wasserkuppe)… 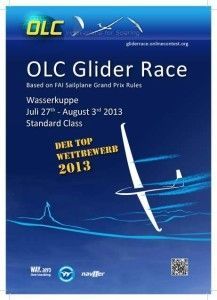 It was not yet too late to watch the German colleagues move forward on the live-tracker. Six sailplanes were equipped with a tracking system, and I could watch them approach the turnpoint and later the finish line. Unfortunately the winner of the day did not carry a tracking unit, so it was a little bit surprising to see a different name on the daily scores. Freddy Hein, Discus 2a (FG Schwäbisch Gmünd) came in first, followed by the two guys whom I had watched on the live-tracker: Christoph Geissler and Daniel Seitzinger (both Discus 2).

In an interview published on the Glider Race-Blog, Freddy explains how difficult the beginning of the day was around the German gliding mountain. Many pilots had to dump their water before starting the race. But after that the conditions improved; the gaggle enjoyed 4-6 knot thermals and had no difficulties turning around the first two way points. The third turnpoint (Wasserkuppe) challenged the competitors: Only 1 or 2 knots were available – a nice show for the crowd of spectators… as some gliders disappeared below the ridge line struggling to climb up again. Those pilots who did not manage this game later could not keep up with the others. After another 55 km of hard work some ten gliders met at the last turnpoint. The clouds had dried out and the sky had turned completely blue. You had to watch out for other gliders and markers to fly on. Freddy Hein’s Discus was the highest at the last turn point, so he came in first over the finish line enjoying the nice feeling of having left nine competitors behind. 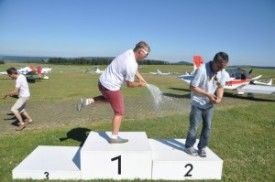 Champagne for the Champion – Freddy Hein, Winner of Day 2

He is quite excited about OLC’s race: “When you make a mistake, the consequences are immediately obvious!” However he thinks it is great to be able to compare the own performance directly with other pilots. The champagne-shower at the end of a wonderful day made for a real Grand Prix-feeling.

To see the total scores after two succesful days please click here. You can also enjoy a set of pictures of a fun August 1st. Tomorrow will probably be another racing day, and hopefully the Saturday a great final. I will try to get up earlier and watch the live tracker with my morning coffee.