From Doug L-L (President of GGC):

Today was a beautiful sunny day at Pendleton, starting out with clear blue skies which were later adorned with scattered cumulus clouds. Runway 26 was in operation and the wind was not too strong but brisk enough to break up the thermals.  We had a total of seven flights, one in the L-23 Blanik and six in the Puchacz. There were five Freedom’s Wings flights in the Puchacz, and Rob Williams flew three of them, Ulo flew one, and I flew two.  Then Ulo had a flight with Roberto Figueroa in the Blanik, and Wally had a flight in the Puchacz. None were of a great duration, but the people from the Ottawa Rehab hospital had a great time, and Roberto snuck in his flight before having to head off to Maine for a brief holiday with his family, and Wally had a pleasant flight, mostly upwind of Pendleton with respect for the wind conditions. Greg came out to supervise and thanks to Luc Savoie for towing in the Pawnee.
Cindy des Lauriers was the recreation Therapist in charge of the Ottawa Rehab. group. I flew with Joe Dorning who had been a Vampire and F-86, Sabre pilot in the RCAF Reserves (a good while ago), and is interested in joining our Club. 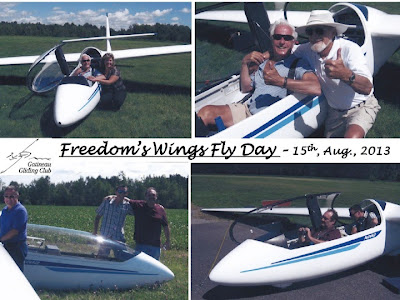 A great day was had by all, and thanks for all the help.