Back in History – A Triple Murder at Holland’s National Gliding Center in 1984!

Last Friday we visited the National Gliding Center at Terlet here in Holland. A lot of “gray-haired-people,” lots of fun; same kind of reunion like last time with the 50th anniversary of my “old” club de ZES. 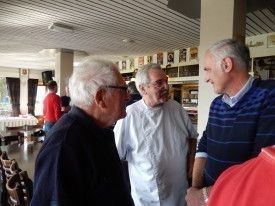 Chef Hans in the middle—as you see all “gray”

There was a tragic story before.

It all started already before 1984, when Hans was working for Aad in the Thermiekbel, more a clubhouse at that time than a restaurant for glider pilots and passers-by—mostly on bikes. It was all wood, and at parties the floor and walls moved with the dancers. If those walls could have talked, books could have been written.

About 100m from the clubhouse was a nice wooden bungalow where Aad and his family lived. A bit further was a camping area were we lived onsite with about 50 families and spent most of our weekends and holidays in the most beautiful part of Holland—the Veluwe.

A great  Dutch National Championship, had just finished with a lot of pilots, crews, family, lots of children (now all in their late 30s and 40s) and friends, with, as far as I remember, good soaring conditions and a late party.
We said goodbye on Monday evening and the next day Kees (Musters) called us early in the morning.
“Did you hear there has been somebody murdered last night at Terlet?” No, we had not heard it.
“I am very worried,” Kees said, “I’ll go there to see for myself; I do not have a good feeling about it.”
In those those years, Kees spent a lot of time at Terlet.

Was it somebody at the camping area, maybe somebody who was caught stealing from one of the caravans? I knew that happened as we had unwanted visitors in our caravan on the “mountain” as well.

Later in the day Kees called us and said it was the cook who had murdered Aad, his wife Gerda and Aad’s half sister Desiree (18), who helped out over the very busy period. Luckily enough, young son Marco (11])  escaped by hiding under the bed.

Knowing how much money was paid by all the guests who had left the day before, money which could not be taken to the bank due to the long weekend, the cook decided overnight that he wanted the money!!
It was not handed over so three people were shot dead. TRAGIC!!!
Of course we all knew the cook too. Unbelievable!! WHY?!

The gliding fraternity was in shock, not only here, but everybody who knew Terlet and the family was “broken.”
Just try to imagine what impact it has when somebody dies whom you got to know so very well through your sport. In this case we lost three friends, not by a mid-air or hitting the mountains with the glider, the other nasty “things” happening in our lives, not through a car accident, but by murder.

Life, however, continued and the Thermiekbel needed a new manager and a new welcoming face behind the bar. Of course we pushed Hans to take over as “we” knew him and he knew all of us as he worked already with Aad. He did so for several years.

Yesterday we saw him again after, for some, 20 years or more. 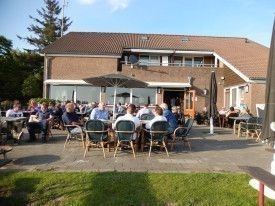 About 65 arrived for dinner, some  for drinks only, but all had a great afternoon and night with good food, lots of laughing, cherished memories and talking. And … also very  important, fantastic weather!!

The nostalgic wooden club house is gone and we ALL had to get used to the new restaurant. It’s not bad, but it is not as it was in the past.

Such a happening is a good moment to remember old friends who are not with us anymore, but had quite some influence on a lot of us. It’s not a story to be proud of, but it is part of the Dutch soaring history; it “just” happened at our treasured National Gliding Center.

For ALL the other news about soaked comps and comps with six days as in the Club Class Nationals in the UK, (today is their last day with a task distance of over 500 km!!), you can go to www.soaring.eu with updates later about this exciting day at Lasham.

Cheers … Ritz, and—sorry—NO news next Sunday. I will be gone for a week to the East of Holland with four high school friends, and this time I will NOT take a laptop with me; it’s a REAL HOLIDAY!