On Thursday, Air Sailing Gliderport (ASG) (at 4300′ and 90°F), welcomed the first “students,” Patrick Greusenmeyer and Rolland Nakashima, for two days of early flying in preparation for this year’s ASG Thermal Camp. They came all the way from the U.S. East Coast to learn to deal with high density altitude, pegged varios, dolphining at 16,000′, heavy sink, and crosswind landings and takeoffs. The first day provided their first cross countries around the valley via a 50 nm triangle [for landmark recognition and an introduction to the lake easterlies and Mark Twain’s Washoe Zephyr (westerlies]. Day two was pattern work with northwest winds and windsocks at three points on the field—all pointing in different directions. 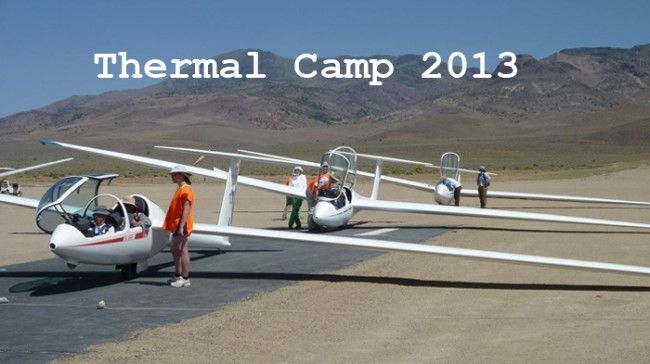 As the day wound down, David Raspet of the Crystal Squadron landed, as his crew, Jan, wended her way through Reno and out into the desert with his glider trailer. Other camp attendees started showing up with gliders on trailers.

We watched the stars pop out and the Space Station orbit overhead as temperatures dropped. With a 30 to 35°F drop in temperature between day highs and night lows, we can expect some good thermals for camp students.

The camp officially starts Monday, June 10th, for five days of morning class work theory, then area checkouts, and some dual and solo flying in the afternoon. Mark your calendars for next year’s camp. Thermal Camp is challenging as an excellent introduction to beginning cross countries in “tiger country” and demands are for precise thermal and ridge techniques.

(and President of the Women Soaring Pilots Association)

Note: the WSPA has held four Women Soaring Seminars at Air Sailing in the last 18 years.