Team flying at the 2013 Seniors

In my February 2013 Condor Corner article in SSA’s Soaring magazine, I talked about John Mittell (BZ)’s and my efforts to teach ourselves team-flying techniques using Condor, modeled after those described by Francois Pin (FP), Bill Elliot (WE) and information John had picked up at the team flying camp held at Chilhowee last year.  The article went on to describe our sometimes hilarious efforts to master the extremely difficult art of effective pair flying, and ended with the following quote:

… “In closing, consider the following hypothetical future scenario.  Due to an increasing awareness of the disadvantages suffered by a country’s national teams in international competitions due to a perceived lack of team flying skills, the country in question decides to modify its regional and/or national competition rules (which currently prohibit any form of non-safety related pilot-pilot communications) to allow (nay, encourage!) some forms of team flying.  The next racing season, two different teams show up at a hypothetical regional competition.  The first team has rarely, if ever, flown together, but figures this team flying stuff can’t be all that hard and they are both excellent pilots, so what the heck.  The second has spent literally thousands of hours flying together on a daily basis in race conditions in every imaginable terrain configuration and is a really well-oiled machine.  Which do you think has the higher probability of doing well – the team that tries to put the whole pair-flying thing together on practice day, or the team that has been training together for the equivalent of 3-5 years?  Your mileage may vary of course, but we know who we’re putting *our* money on!”

As it turns out, the above ‘hypothetical future scenario’ occurred in almost exactly the manner described at the just-concluded 2013 Seniors.  The rest of this post describes the actual results of ‘Team Condor’ in comparison to an actual pickup team (their names have been changed to protect the guilty).  In the following, I urge the reader to keep these points in mind: 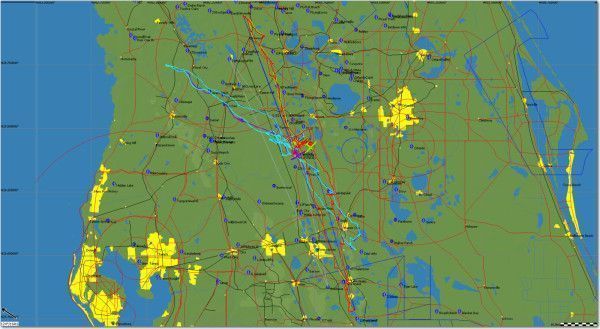 This was a windy day with clouds and significant streeting.  Team Pickup (aqua/blue) appeared to orient their route more along the windline than Team Condor (and enjoyed a higher task L/D), but Team Condor (red/yellow) flew significantly straighter lines and achieved better climbs.  Both teams started together and  stayed together through most of the task.  Team Pickup separated at the end, most probably due to the performance difference between the ASG-29-18 and the ASW-27 (almost 10 pts L/D difference).  Team Condor started and ended within seconds of each other. 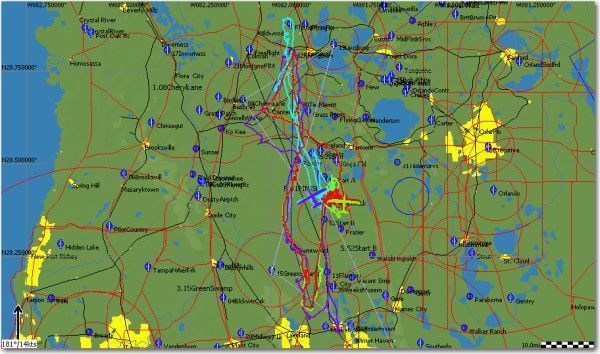 Day 2 featured a combination of the threat of overdevelopment coming in from the east, coupled with the threat of high clouds from the west.  Most pilots started as early as possible, to get around before the day died.  About five minutes after the start, Team Pickup (aqua/purple) split up, with one pilot continuing northwest and the other one going due north.  It actually looks like PT2 made a programming mistake and was flying the wrong task.   Team Pickup flew the rest of the task individually’ PT1 got around in good order, but PT2 landed back at Seminole without completing the task.  Although Team Condor (red/green) stayed  together for almost the entire task, we did get separated right at the end when we ran into difficulties on the next-to-last leg.  We entered a thermal together with a number of other gliders, but BZ couldn’t find the climb, while TA was doing reasonably well, resulting in a significant altitude difference.  BZ elected to go on, but TA didn’t go with him (mistake #1 – the team should always stay together!).  A few minutes later, when both TA and BZ were very low and headed for Flanders to land, BZ hit a significant bubble, but couldn’t find the core right away, and  when TA couldn’t find anything and went on, BZ stayed to continue the search (mistake #2 – repeating mistake #1, except the other way around).  TA found a weak thermal another mile toward Flanders, but by then the separation was too great for mutual support, so Team Condor had to dig out independently using two separate thermals instead of being able to help each other in the same one.  Even as much as we have flown together, with the explicit intent to “land in the same field”, it is very easy to fall into the ‘every man for himself’ mindset under pressure.  This particular flight resulted in some serious heart-to-heart discussions within Team Condor. 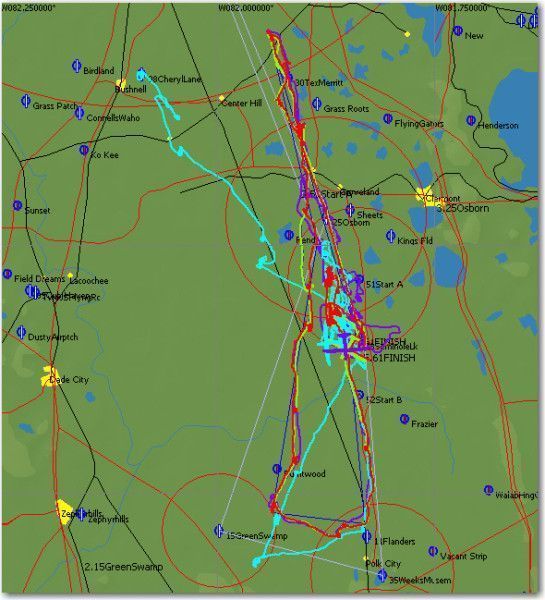 In the words of weatherman Richard Kellerman (QV); “blue, windy, low, and weak”.  Definitely a survival day if there ever was one, and a day in which team flying could confer significant advantages.  Most pilots (including Team Condor) stayed with one or more huge furballs as they rolled along the course, as the furballs represented the best way to avoid a landout.  While Team Condor (red/green) was able to accomplish this in reasonably good order, Team Pickup (aqua/blue) did not.  PT1 left with TA/BZ, while PT2 didn’t leave until over 3 minutes later.  This meant that PT1/2 were well outside mutual support range, and consequently PT2 fell farther and farther behind, eventually landing out. 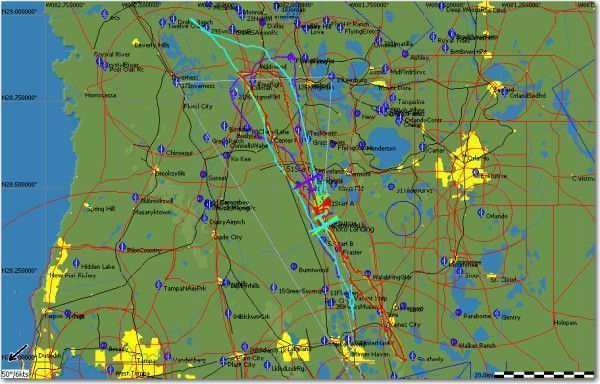 Day 4 was another blue day, although much better than Day 3.  The better conditions significantly lowered the ‘furball factor’, but still put a premium on the ability to cooperatively search for lift and/or exploit marked thermals.  All four pilots left within a few seconds of each other, and basically flew as a 4-pilot team south until just before entering the first circle, at which point the two teams diverged – Team Pickup (aqua/purple) turned north soon after entering the first circle, while Team Condor (red/yellow) continued south.  This was an interesting tactical decision difference; PT1 had to go all the way to the back of the Inverness circle in order to avoid flying over the huge lakes in the central and eastern parts of the Leesburg circle.  If conditions had been even a little bit better, PT1 would have been faced with a ‘Hobson’s choice’ – an undertime arrival or a potentially disastrous overwater excursion on a blue day.  Team Condor penetrated another 12 miles into the Alturas circle before turning (24 additional miles round-trip) and therefore was able to just nick the extreme western edge of the Leesburg circle while avoiding the marshy areas in the Inverness circle.   In Team Pickup, PT2 was unable to keep up with PT1 on the norther leg, and soon the two pilots were operating independently.  Even with two ships of almost identical performance (Ventus 2bx and ASW-27) and lots of practice, staying within mutual support range isn’t easy; trying to do the same thing with an ASG-29-18 and an ASW-27 with NO practice is a recipe for disaster. 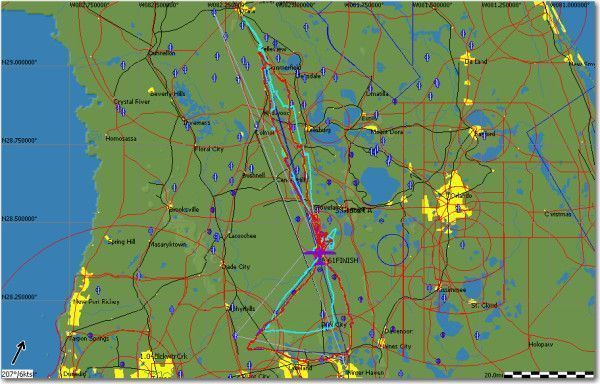 Day 5 was blue again, but slightly better than day 4.  PT2 (purple) defected from Team Pickup and instead flew with Team Condor for the entire task, turning in his best score of the contest ;-).  Team Condor (red/green) flew well and consistently, earning a 6/7 finish for the day.

Team/pair flying is not a silver bullet or a panacea; effective pair flying is a very difficult skill to master, and brings with it a whole host of problems that individual pilots don’t have to consider, such as the need to stay within mutual support range even when low and under pressure, and the requirement for efficient, unambiguous communications at all times.  At the Seniors, we had to deal with a number of real-world communications problems in addition to adapting to the differences between pair-flying in Condor and pair flying in RL (we had never flown together as a team in RL until this contest).  IMHO, there is no way to become effective at team flying without putting in literally hundreds of hours of stick time, with your pair flying partner, plus many more hours discussing how to address the problems that inevitably arise.  It is quite possible (even probable) that team flying will degrade both partners’ performances before it starts to help – if it ever does.  Anyone (even U.S. Soaring Team members) who think they can just pair up with another pilot and be instantly effective is likely to be disappointed, to put it mildly.  Even a cursory examination of the results from the Uvalde WGC will show that our U.S. teams flew a lot more like Team Pickup than Team Condor.

I believe the just-concluded 2013 Seniors was the first U.S. contest in living memory (excluding the Uvalde Pre-worlds contest) where team flying was allowed, and I think it is safe to say that this article provides the very first definitive analysis of the benefits of practicing pair flying techniques using the Condor simulator.  John Mittell (BZ), in just his third real-life contest spread over two years, placed 11th in the very competitive Seniors contest, where almost all the top 10 have at least regional wins under their belts.  I would have placed 8th or 9th had I not been ‘landed out’ due to a finish altitude more than 200 ft below minimum height on Day 4.  On all 5 days, Team Condor started within a few seconds and finished within a minute of each other, and our traces are virtually indistinguishable from each other.  I think it is quite telling that PT2’s best contest day occurred when he defected from Team Pickup and instead followed Team Condor.