Today promised to be warmer and we hoped for some better soaring conditions.  Unfortunately the last two remaining visiting Vintage gliders, the Ka-8 and Ka-10, loaded up and left this morning. We were sorry to see them go but hoped that it meant good things for our potential.  Pete VonTresckow and I had earned a coveted VSA Silver Coin yesterday with our flight in the Ka7, making a 1000m altitude gain.  There was some discussion about cutting the coin in half or perhaps arm wrestling for it, although I had volunteered Pete to pay for the flight so I guess the coin was his.   Leah and I were confident that we could get a coin for ourselves today in the Ka7 and Pete was going to take the rental 1-26 up again today for another attempt, so perhaps we could each get a coin.

There were plenty of other ships flying today, and from a Vintage standpoint we were happy to see Kevin Anderson arrive in his 1-26 #192.  Also flying today was an ASW-20, ASW-19, ASW-15, LS-3, Apis 13, and many hops by the 2-33 and 2-32 on ride flights.  Leah and I took off right after Kevin and joined him in a nice thermal over the ridge.  I think the wind might have been calmer today than yesterday so definitely no ridge lift but Leah and I climbed up to about 5300 ft.  We needed 5700 to get our altitude gain. Kevin started running North on his task and we followed for a few miles.  We mostly cloud-hopped around the valley, occasionally finding a good core although most of the lift was in the 1-2 knot range. When you did find the good stuff it was narrow and hard to hang on to. There also seemed to be a wind direction shift near cloudbase which made it tough to get within a thousand feet or so of the bases. Leah and I never were able to make it any higher so no coin for us. Here is the flight: http://www.onlinecontest.org/olc-2.0/gliding/flightinfo.html?flightId=-1879268660. We’ll have to try again at the rally in Wichita this fall, since we won’t be able to make it to IVSM in July. Pete didn’t have any better luck in the 1-26 although Kevin did make a good flight out to the north and back, scoring some good OLC points: http://www.onlinecontest.org/olc-2.0/gliding/flightinfo.html?flightId=-1862540387. 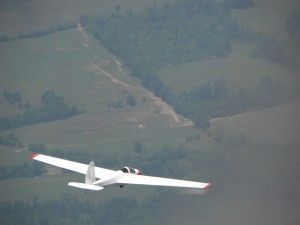 Kevin in #192 heading out on course 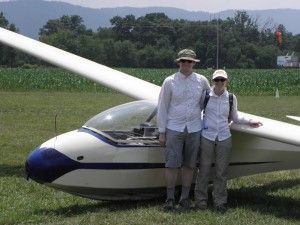 2 comments for “Chilhowee Vintage Rally – May 27”