Flying a Vintage Glider in a Regional Contest

“This glider was unique. First of all, she was no contest sailplane. Most competition-oriented pilots could see that.” — Stan Hall (1956)

Stan Hall dryly made this statement in his report about the first flight of the Cherokee II in the November/December 1956 edition of Soaring.While the glider was not designed as a competition ship, a few pilots had good outings at regional contests with Cherokees over the years. Notably, our own Dean Gradwell flew several Region 11 contests in his N72DG in the 70’s and early 80’s. Carl Herold won the 1976 Region 11 Sports Class and Ted Garnett won the 1978 Region 4 Sports Class in Cherokee IIs. Bud Brown also won a few handicap trophies in Region 6 in the late 60s in N4653T, now owned by Leah Condon. This summer we decided to try our hand, at the Region 10 Soaring Championships in Llano, TX. I wrote up daily flight reports from the contest on my Cherokee II blog and for SoaringCafe.com, so here I am summarizing some factors particular to flying a vintage glider at an SSA contest. 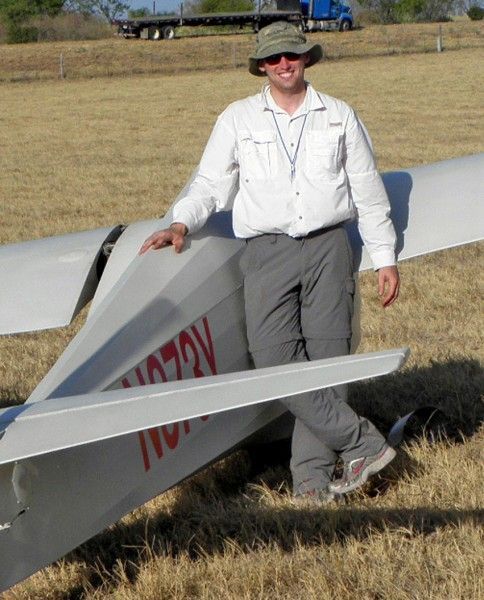 The author and his ship at Llano, TX. photo by Leah Condon

The SSA publishes the SSA Guide to Soaring Competition, which is put together with the new contest pilot in mind. I would recommend that any pilot, vintage or not, read it several times in the six months leading up to a contest. Also, read the rules, several times, especially the appendices to the rules, as they provide good information. There is a lot more to the rules than how the race is scored. The old saying is “I’d rather be dead than embarrassed,“ right? Maybe a bit extreme, but my chief motivator during the pre-contest preparation period was to avoid embarrassment. I wanted to make sure that Leah and I were organized and on time all week long. Leah and I spent some time getting the truck stocked up with supplies for the road trip.

You need to be ready to take the glider on the road. Your trailer needs to tow well and work for you and your crew. And yes, I think that if you want to fly a vintage glider in a contest you must have a crew. But if you’re flying cross-country from your home field in a vintage glider you probably already have a crew so that shouldn’t be a problem. I think that most people who travel to VSA rallies are probably ready in this department. You’re also going to need a radio and some sort of GPS logger and an understanding of the tasks that can be called at the contest you are going to. I decided that while my glider is vintage, its panel does not have to be. I have a Microair radio and a Naviter Oudie moving map connected to a Nano logger, along with a basic audio variometer/averager. You really should have an audio variometer as well because you will need to gaggle and need to look outside. With the widespread introduction of PowerFLARM this season, that is something to look into seriously. Not only if you are going to a contest but for events like IVSM. I can say with certainty that the gaggles I was in at IVSM 2009 were much more exciting than the Region 10 Contest. All of this applies whether you are flying vintage or not. 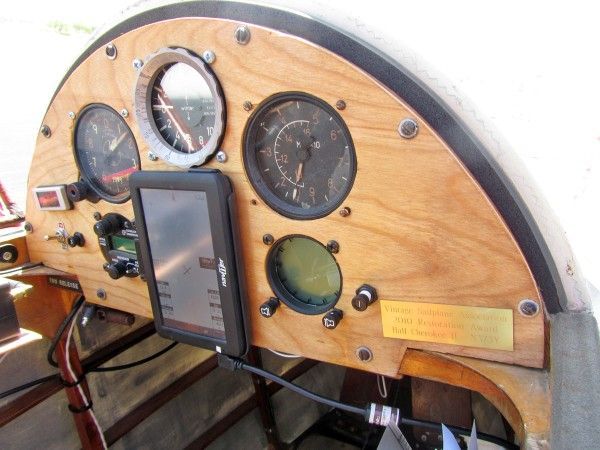 Old & new technology is combined in this instrument panel. photo by Elizabeth Quintanilla

Over the last several years of cross country flying Leah and I have developed a pretty good system for traveling and going XC, which we have refined on trips to Ulysses, KS and Littlefield and Dalhart, TX. The truck is always stocked with Delorme atlases for the surrounding states, plenty of tools, and many spare parts. Leah keeps an AAA membership just in case. We also have a few plastic tubs, one to hold glider related items and another for repair materials. The tub dedicated to the glider contains charts, my GPS, checklists, canopy cleaner, and the like. Another tub is full of glider repair stuff, like epoxy glue and filler, some clamps, fabric and fabric repair supplies, just in case any minor repairs were needed. Those are the things you don’t have to worry about if you are flying a glass ship. Also, there were supplies for the truck, containing spare parts, bolt cutters, and detail maps for the area.

We got to Llano, TX, as early as possible, which allowed us to be there for the official practice day, but also another unofficial practice day. I think it is definitely worthwhile to do this, especially if the contest is in a new site or you are new to contest flying. The practice day is also a good opportunity to get used to the timing and rhythm of a contest day without the pressure of it being a real contest day. My main focus was to fly around the area and evaluate land-out options, have fun, and try to make it home. In fact, on the unofficial practice day I flew a short 80-mile out and return just scouting out to the south of Llano and made sure to make it back home with no issues. I didn’t want to land out before the contest had even started! On the official contest day I was happy that Leah and I were able to be where we needed to be when we needed to be. The first contest day was our third flying day and by then we were starting to get in a groove.

Part 3: Be Ready to Land Out

Coming in to land. photo by Elizabeth Quintanilla

Landing out goes with the territory when flying a vintage glider cross-country. In fact it often goes with the territory when flying any glider cross-country. Don’t only be prepared for landing out but it would be good to have several under your belt. Over my several seasons of flying a lot of cross country flights, I probably had 25 land-outs in the ship. You don’t need to have that many, but you should be ready to put your glider in a confined space. My goal for the contest was to finish one day and Leah and I were both prepared for me to be landing out every day. Thankfully the weather was good enough that I only landed out once, on Day 2, and that was 4 miles from the finish after flying 160 miles. Needless to say, the retrieve was short.

Part 4: Be Prepared to Finish

For the past 5 years, nearly every time I flew cross-country I went straight out. Even though I had good intentions I really had very little experience in attempting closed course flights and actually finishing. Definitely less than a half dozen cross-country flights had ended back at home for me. I also did not take the time to really learn how the final glide indications on my computer worked. I had a vague idea of what they were saying but that was all. This combined for an interesting situation when I was trying to decide when to start my final glide. One advantage in a vintage glider is that you can usually see your glide angle, which helps; however, we often had a situation where there was a final turn area and it was likely that you could start your final glide before making the turn back to the airport. However, it is definitely better to finish high than to land out and if you have plenty of margin and encounter sink approaching the airport you will still be OK. I always had the goal in mind to finish at 1,000 feet but more often than not I was closer to 1,500 and at least one day 2,000 or better. Many times this was after some really high speed diving to burn off altitude, once as high as 90 mph, a good indication of a poorly planned final glide. This is something that would be really easy to practice at your home field and I intend to do that this season.

Part 5: Be prepared to win a day

Yes, it can happen. At Llano the weather was strong and consistent all over the task area. I made up for landing out on Day 2 by winning Day 3. On the final day I had a magical flight, running 120 miles at 50 mph to also win that day. My main goal every day was first to do whatever I could to finish the task. Thanks to the strong and high weather, when things were going well I was able to be choosy and fly fast, but there were plenty of times during the week where the choice was to work weak lift or land so it wasn’t that hard of a choice to take the weak lift. On the final day I was able to stay high the entire flight, which allowed me to be choosy and only take the strongest lift. A conveniently placed cloud street made the upwind run easy and everything came together. Staying high is harder to do in our gliders that descend a bit more steeply than most.

I think it would be a lot of fun to have a mini-VSA rally at a regional contest. I’m trying to get some of my friends to do it. The handicap system we have isn’t perfect but this contest shifted my perspective and I really believe that the handicap system is as fair as we can get and works pretty well.

Leah and Tony staying cool on the grid. photo by Elizabeth Quintanilla

A soaring competition means many things to many people. For some it may be a race to try to make the U. S. Team, for others it is a chance to refine skills and fly faster. Others enjoy the opportunity to get more cross-country experience in a structured environment and have a fun time flying with friends. I found everyone at Llano to be focused on their flying, but not impolite or unfriendly in any way. There were lots of glass ships but no glass-holes. I think it would be neat to crash a regional some day with a half dozen or more wood ships. With enough entrants maybe we could get a vintage sub-class within Sports Class. Wouldn’t that be fun!

Editors’ Note: We are indebted to author Tony Condon and Simine Short, Editor of “Bungee Cord”, newsletter of the Vintage Sailplane Association (VSA), for permitting us to reprint this article from the March edition. For more information about membership in the VSA, click here.