On February 24, 2012, three members of the Eagleville (Tennessee) Soaring Club attended the North Carolina Wave Project: Bob Richard, Werner Ruegger and myself (Duff Zimmerman). The camp was conducted at a really nice grass strip, Shiflet (9A9). Out of the 12 pilots who tried to find the wave, only Werner was successful! 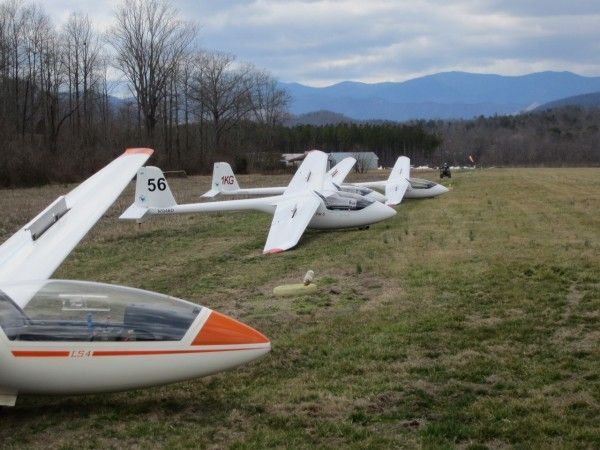 It took about six hours to drive over Friday evening and I arrived at the airport at about 11:30 pm and dropped off the trailer. It was spitting snow, blowing 20 knots and 37 degrees F. I was glad to see many other glider trailers there so I was not the only crazy person thinking about gliding in mid-winter.

After a quick night in a hotel I was back at the airport at 8 am. The day started out windy and partly cloudy; the wind is good, but the clouds not as good because they indicate instability. Many pilots took tows in the morning but had no luck finding the wave. The wind at altitude was over 45 knots and the air was very turbulent. Sarah Arnold, the host and tow pilot, said it was some of the worst turbulence she had towed in.

Ed from Raleigh NC who flies here regularly gave me two really good tips: 1. Stay low on tow; it’s easier to recover from large ups and downs, and 2. on downwind don’t go past the end of the runway before turning base—and carry lots of speed. With a 25 knot wind and rotor on final, landings can get interesting.

I was lined up thinking I was #4 when suddenly Jay Campbell, the other host, said “Your turn.” So in my rush to get off, I was sitting on my oxygen equipment, my water bottle was unreachable, and I actually gave the thumbs up signal before I was hooked up to the tow rope! There’s a lesson for you—don’t be rushed.

The tow was really crazy just trying to stay upright. I found myself in positions I hadn’t seen since the last time I boxed the wake! My head found the canopy more than once. I released at 4,500 feet AGL and found lift everywhere.

In no time I was up to 8,000′ MSL. To reach the wave you have to cross a ridge lower and just east of the Mt Mitchell summit. I thought for sure I could reach the ridge and headed straight for it. My computer was showing I could make it back to the field with over 5,500 ft to spare, but how quickly things can change. There was nothing but sink all the way to ridge. In minutes I had lost 4,000 feet and had to turn back for the airport before I reached the ridge. I got a little nervous as there was nothing but sink, but after a couple of miles I was back in lift again and making the field was no problem. I was a little spooked by how quickly this change of events had happened and decided to go ahead and land and “get my ducks in a row.” I made a “carrier” approach, close downwind and a 180 degree turn at 80 knots to final. Plenty of turbulence but thanks to Ed’s tips, the landing was no problem.

Meanwhile Bob took a tow, then thermaled up to cloud base, but there was 8/10 coverage of clouds by then and he couldn’t get any higher than about 9,000 ft. Werner was watching the clouds and waiting. “There are some nice streets headed straight for Mt. Mitchell. Maybe I will make a little flight after Bob just to do some thermaling”. The wily veteran was just watching and waiting….. 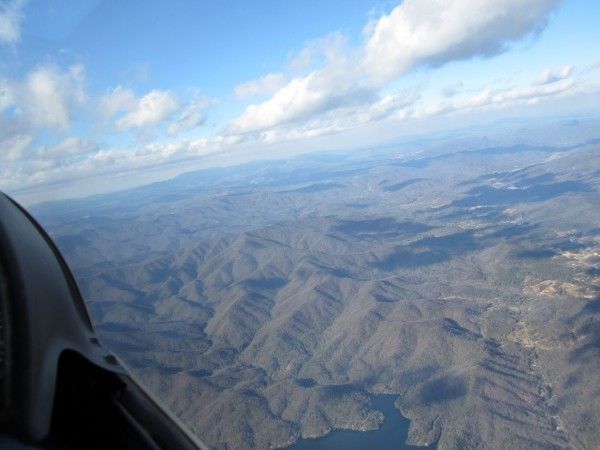 View of Mt. Mitchell and vicinity from on high

I got ready to go again about 3 pm, camelback in position, oxygen equipment stowed correctly, straps cinched tight. The tow was better this time, or maybe I knew what to expect and handled it better. I got off at 3,500 AGL and had no trouble getting to cloud base at around 8500 MSL. The clouds were thinner now, maybe only 2 or 3/10 coverage and I thought I might be able to get above them. I was at 9,000 ft and going up so I donned my oxygen and thought this could be it. I saw an opening in the clouds and headed for it. Winds were showing 290 deg at 49 knots. I got up to 9,400 ft but the next cloud was coming fast and I couldn’t make it above before it arrived so I had to descend. I tried a couple more times to get through the clouds but each time I had to descend. I assumed all the lift on this day was thermal (my mistake)—after all no one had been able to find wave—and resigned myself to soaring around beneath the clouds. 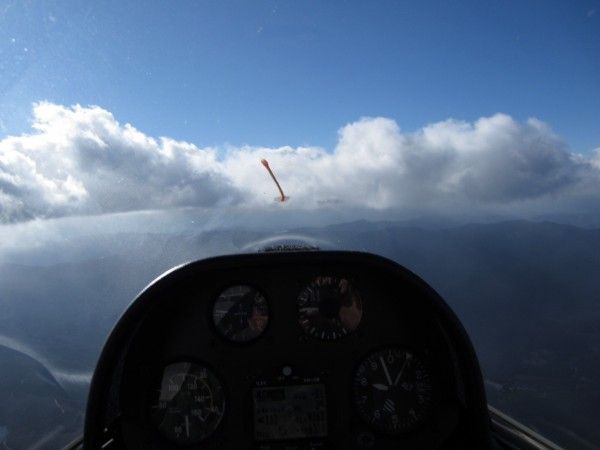 View of clouds from Duff's cockpit

Meanwhile Werner had taken a little tow in Bob’s ASW 27 and was following the cloud streets toward Mt. Mitchell. I had been in the air for over two hours and noticed the clouds were getting less and less. That’s when I heard Werner’s unmistakable voice, “I am above the clouds and climbing nicely at 11,500.” He had followed the street until there were almost no clouds, just little ‘wisps” of lift that propelled him into the wave. Werner asked me if I knew what time official sunset was as it was getting late. I radioed to Bob on the ground and he relayed to Werner that official sunset was 6:21. In order for any badge flight to count he would have to be on the ground at that time. I landed and joined Bob, Sarah, Jason, Jay and others standing around listening to the radio. “14,500 and climbing at 4 knots.” A few more minutes would pass, “16,500 and climbing in 4 knots.” It reminded me of listening to the astronauts reporting back to Houston control. Werner’s altitude seemed so high it was almost like he was in space. “Don’t forget to contact Atlanta Center,” Sarah reminded. At 17,000 Werner attempted to contact Atlanta Center to obtain clearance to enter the wave window in controlled airspace at 18,000 ft. We switched frequencies to hear Werner say, ” Atlanta Center glider 45EM request permission to enter wave window,” then, “Permission granted 45EM.” Just in time as Werner continued climbing through 18,000 ft. We listened as Atlanta Center reported Werner’s position to passing jets, “SW 323 you have glider traffic at your 1 o’clock 18,000 ft and climbing.” It was now approaching 6 pm and time was getting critical to make it back to the ground before sunset. Werner realized he wouldn’t make it to 21,500 and back down for a diamond so at 19,500 he decided to grab the gold badge and try to make it down before sunset. We listened as he departed controlled airspace and headed down. With full spoilers and safely below Vne, Werner headed down to try and beat the clock. We held our breath until we heard, “45EM entering downwind Shiflet.” When the ground roll stopped he had two minutes to spare. Whoo hooo! On his first solo flight in almost a year, Werner had been the only pilot to find the wave. Was it just luck, being in the right place at the right time? Werner would modestly tell you so, but I don’t think so. He is “The Man.” 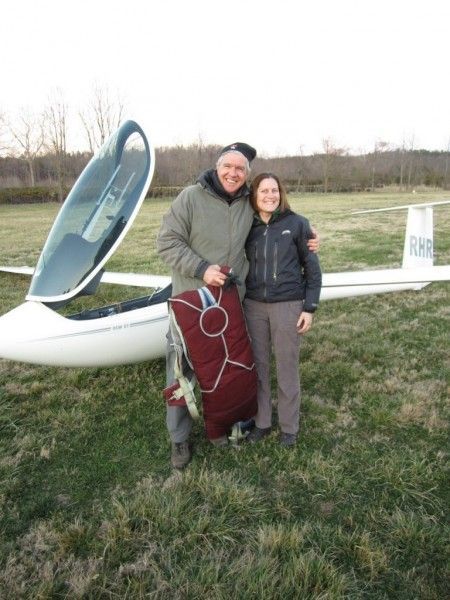 Bob was heard to say, “Well now my glider has been almost twice as high as I have ever been but at least I can land it without bouncing most of the time…ha..ha.” In his excitement to get on the ground, Werner had bounced the landing two, three, or more times!!! What a fun group of guys to hang out with and learn about soaring. Thanks for allowing me to just be there and for all the help you gave me all weekend. Special thanks to Sarah and Jason Arnold and to Jay Campbell for putting on the Carolina Wave Project.