My children, who have been in an around aircraft, mostly gliders, from the beginning of their young lives sit at the dining table in early January. They want to fly! Outside it looks like we could actually go soaring, but it’s too cold, and the gliders are put away for the winter. So, what’s the next best thing to do? Condor!

This is the first of what I hope are many blogs about glider training using Condor.

As a new U.S. CFIG (have been a Swiss CFIG since 2001), I want to parlay my knowledge and experience to other pilots and student pilots in any way possible. My children have flown with me since they were old enough to sit in the back of my Nimbus 4DM, and continue to do so whenever there is an open seat. After getting my CFIG this past September, they were the first to raise their hands for a lesson.

With my first students ready to go, I gathered the troops, explained that this would be their first flight in the front seat, and that it would just be a 20-minute familiarization flight. It looks like they enjoyed the first round. The flying weather ended shortly after this day, October 2, 2011. 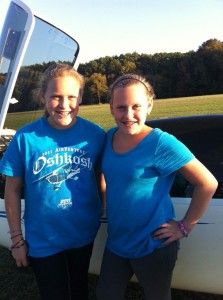 Stephanie and Vivienne after their first flight as students 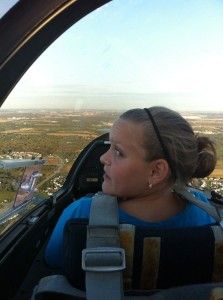 Vivienne at the controls 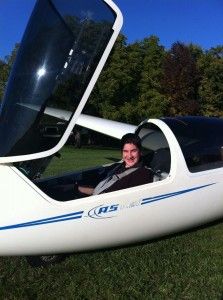 In order to take advantage of the down time we bought Condor, along with pedals and a control stick, and so it begins……. Paul Remde had the goods quickly delivered, but the desktop I planned on using was no longer up to par due to some registry errors. So, the notebook came out to save the day. Once I got the software installed, and ready to go, I began to ‘play’ around with the program, to test it out. It’s fantastic, and addicting. Of course, the peanut gallery kept wondering when they would be able to fly?

We started with Condor’s Flight School, but it is too buggy to use for true glider instruction. I opted to go with what I know, and used Free Flight as the next best thing – much better. Using the default scenery, I got in the air as quickly as possible, and demonstrated to the students, high level, how the controls works, airspeed control, turns, etc., but the expression on my student’s faces was more of, “Okay, what’s next?” Moving on, and doing my best to keep their interest high, and making this a fun and motivating experience, I downloaded various flying locations such as the Alps 2.0 and Western Switzerland – areas where I’d spent almost 20 years flying various aircraft, mostly a Nimbus 4DM, LS-6, and Libelle H-301. After trying out the different areas, and considering the student’s needs, I finally settled on Vinon, which is located at the southern end of the Provence. The area is relatively flat, not too far from the French Alps, and close to Marseille, France. It’s a wonderful place for training, which I know from a few training flights there in a Pegasus, and from many many hours flying from there, Puimoisson, and St. Auban.

In order to get everyone up to speed, I had my students read the first four chapters in the Glider Flying Handbook (GFH). I’ve also incorporated Helmut Reichmann’s Flying Sailplanes and Scott Manley’s prerequisite flowchart into the training program. Going through the basics as much as possible, the students were given an area/airfield overview before setting them up with their new trainer, an ASK-13, where we discussed each component such as fuselage, wings, elevator, ailerons, etc., their purpose, and how they work. They remembered their checklist, and walked me through how they would go about inspecting the glider before strapping in. The next step was to get them behind the controls, and see what it feels like to press the rudder pedals, push/pull on the control stick, open/close the spoilers, and use the control stick switch to look inside the cockpit and also their surroundings. Almost ready to go, I had them perform the pre-flight checklist (as much as possible) then explained how they should perform their first take-off.

Well, as you can imagine, none of them did very well the first, second, or even third time around. I demonstrated a few tows to altitude, along with some rope breaks, crashes and flying through the trees (the tow plane did it!). After several tows, I had the kids sit in the pilots ‘seat’ = dining table chair, while sat behind them ready to go. With their hand on the control stick, and my hand over theirs we proceeded to get ready for a our first, dual tow. They already know how to use, and say the the pre-flight checklist out loud before each and every flight, and proceeded to do such at the start of each operation.

The pawnee approached, the wings were brought to level and away we went. Through much trial and error, and approximately 40-50 attempts (over the course of a few days), each student was able to successfully climb to altitude until the tow plane rocked it’s wings (signal meaning “release now”), and away they went to ply the skies….Not! This may not be the best way to start glider flight training, but it seems to work very well in Condor.

Now that all 3 students are quite familiar with Condor, and how it works, the next lesson will begin to focus on 14 CFR Part 61.87 -Solo requirements for student pilots and 61.87(i) Maneuvers and procedures for pre-solo flight training in a glider, which says: A student pilot who is receiving training for a glider rating or privileges must receive and log flight training for the following maneuvers and procedures:

(1) Proper flight preparation procedures, including preflight planning, preparation, aircraft systems, and, if appropriate, powerplant operations;
(2) Taxiing or surface operations, including runups, if applicable;
(3) Launches, including normal and crosswind;
(4) Straight and level flight, and turns in both directions, if applicable;
(5) Airport traffic patterns, including entry procedures;
(6) Collision avoidance, windshear avoidance, and wake turbulence avoidance;
(7) Descents with and without turns using high and low drag configurations;
(8) Flight at various airspeeds;
(9) Emergency procedures and equipment malfunctions;
(10) Ground reference maneuvers, if applicable;
(11) Inspection of towline rigging and review of signals and release procedures, if applicable;
(12) Aerotow, ground tow, or self-launch procedures;
(13) Procedures for disassembly and assembly of the glider;
(14) Stall entry, stall, and stall recovery;
(15) Straight glides, turns, and spirals;
(16) Landings, including normal and crosswind;
(17) Slips to a landing;
(18) Procedures and techniques for thermalling; and
(19) Emergency operations, including towline break procedures

The next lesson will focus on aerodynamics, cockpit controls, and instrumentation. In addition, they will learn about airspeed control and turning flight. We will go through the above items, but not necessarily in the order indicated above.