Boyd and Devin have been collected from their fields, after having, as the French would say it, landed ‘avec le vache’ – with the cows. Both landings were uneventful.

Boyd said that around 1630 the lift kind of just quit. This would correspond with about the time that everything just went blue. Tricky flying today for sure. Lemmy Tanner, the owner of Devin’s LS-8 went to retrieve Devin and I haven’t yet had a chance to speak with them. It seems that had the launch proceeded with more expediency, the starts could have started sooner, therefore taking advantage of the better lift earlier in the day. Hopefully things progress more quickly tomorrow.

None of the standard pilots successfully completed the task, and only about half of the club class finished theirs. The club class started approximately 45 minutes earlier than the standard and had a shorter task.

Pilots have been trickling in throughout the evening, some having had two to three hour return trips.

The low tonight is 46 degrees, with a dew point at nearly the same temperature. We are expecting another exciting day of flying tomorrow.

From Musbach and happy to be flying, 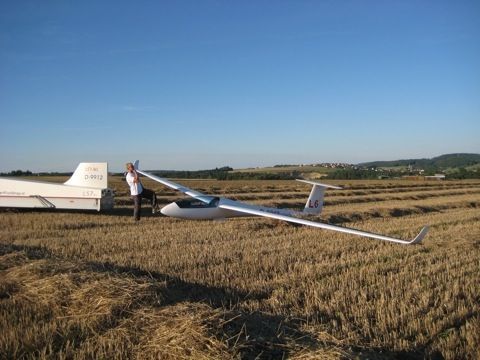