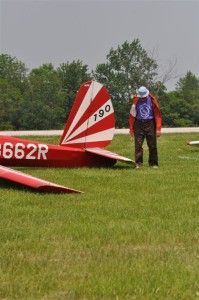 Today seemed sadly different to me when I pulled into the airport in the early hours.  Knowing that there wasn’t enough time left in the competition and there wasn’t going to be a Championship this year at Kendallville.  However, not having a Contest Day doesn’t mean you can’t have some competition and that is exactly what I saw when I came into the terminal.  Folks looking at the sky, checking the weather and pretty much acting the same as they did all week; “I want to fly!”

At 9:00 a.m. the contest group met downstairs in the meeting room and spent some moments with each other enjoying a video in tribute to former members who have passed on.

A little bit later all of us volunteers got called down stairs and the PW5 and 126ers gave us a round of applause for all our hard work on hosting the contest.  (Ok, it was actually a standing ovation and I was a bit embarrassed.  I wanted to applaud all of them for being such a great bunch of folks to have at a contest.)

After the meeting some folks started packing up to hit the road but others started getting ready to fly.

Our CD Jerry Steffen stated again that…”There are trophies for the contest and they’re sure not going to stay in the boxes.”  (I was wondering for a while if maybe they’d go back up to the go-kart track and race for the trophies up there.) 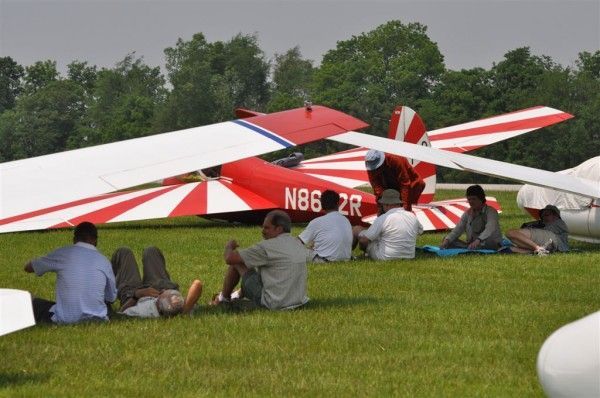 I’d like to make note here that by this time of day, unfortunately, I had had to leave and go back to work.  Real let down that was too.  My vacation was over and I had to go back to work and the contest folks were going up to fly.  I spent about an hour inside doing work things, and couldn’t stand it any longer.  I headed out on the roof just to see if I could spot some gliders!  It was darn hot up there on the roof and I called Jerry at the ‘port and made some joke about getting 5KT lift off the rooftop and everyone needed to head over here.  I didn’t see any ships which was actually a good sign, they were out on task somewhere instead of circling hopelessly over the airport.

Kevin Anderson in 192 needed a relight after having to come back and take care of some tape issues on his wings. 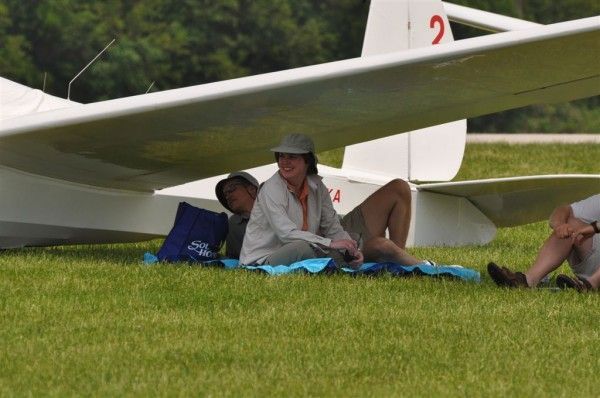 Gus Johnson in 008 landed out at Butler, Jonathan Leal landed out, and Ken Ekman in 160 landed just off of School House Road.

The last ship to land back at the ‘port was Kevin Anderson in 192.

Forgive me if I don’t get this right guys:

That’s going to have to be the report for today.  Tomorrow morning is the awards brunch and I’m looking forward to seeing who gets trophies, (and well, what they might be for.  It might be something about go-kart racing in there.)

Thanks Ondreya for helping while I was off at work.  JS.