Check out all the news here and see all the photos here.
Once again the weather has had everyone wondering if we’re going to catch a break.  The morning report didn’t look good but the unshakable optimism of contest pilots never ceases to impress me. 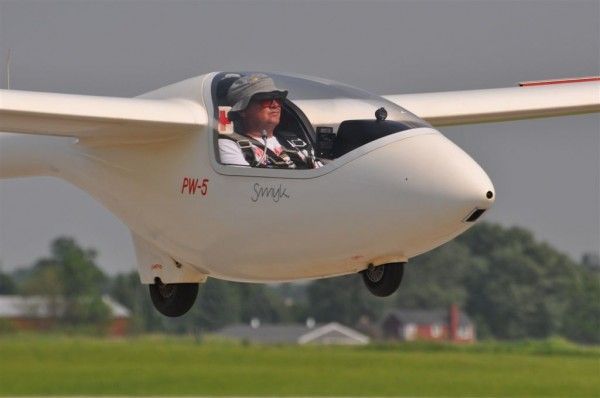 At the morning pilots meeting our CD Jerry Steffen called a TAT from start circle of 5 miles at Adams Lake, south 26 miles to Stettler with a 9 mile circle, back north 45 miles to Kirsch with a 19 mile circle, and back 25 miles to Kendallville with a 1 mile finish circle.

Also I should mention as part of the pilots meeting; Bill Vickland gave a safety talk.  I found the talk to be very interesting and I’d like to thank Bill for his insights.  Bill was willing to talk about accidents that he himself were directly involved in over the years, some funny, some very serious.  When you hear a talk like that, from someone who has been there, it really makes more of an impact.  It’s not the standard, “stay high, keep your head up” sort of speech.

On with the day…Everyone started pulling gliders from the big hanger and the grid was looking pretty full by 12:30.  Oh yes, and we added another PW5 to the field today.  Geoff Weck in PW5 made a fourth member for the front of the grid.

At 1:20 the four PW5’s decided to head up and see how things looked for themselves, and after getting some feedback Jerry launched the grid.

Another side note here, with our three towplanes making good runs and the ground crew getting the hang of running the rope, I believe we got everyone launched in around 38 minutes.  I was a wing runner again today and I’m here to tell you….that’s some hard work.  With the prop wash, wind, sun and run….I was begging for a Gatorade in no time!  This is not your normal afternoon of soaring with the club.

With everyone up and hanging on, Jerry called a Start at 2:30pm.  Could it be we were going to get our First Day in for a contest?

Unfortunately, it wasn’t to be.  We had eight land outs and the 1-26’s couldn’t get the contest in.

Bill Snead in 6W made the entire task for the PW5s.

Some honorable mentions here: Curt Lewis in 216 gets a nod for landing out at a local home where a graduation party was going on.  I believe he still had some punch and cake on his chin when he got back.  He says he didn’t join the graduation party, but I don’t believe him.  He picked that landing site on purpose!

Another nod to David MacKenzie in 647 for the shortest distance today: 2.45 miles.  Sorry Dave, but you were just a little short of Kevin Anderson in 192 at 2.99 miles.

Dave’s honorable mention isn’t just for the short distance, it’s for his relights.  Dave had three relights plus his launch today.  I was running the wings.  I’ll give the nod to all you Contest pilots, there’s no doubt you want to be up there in that sky.   You could just see it in Dave’s eyes….”should I stay or should I go.   Should I stay or should I go.  I was sooooo close.”  Then….”Okay, hook me up, I’m going back up!”

(If you all can’t tell, I am thoroughly enjoying this contest.)

Hopefully tomorrow will be a better weather day.  It has to happen sometime.