[Note: Here is a flight report from arguably my best flight last season. ]

I had a fun time skipping work yesterday. Declared a 300 km out and return and took off at ~ 1PM. I made sure to get a valid start within 1 km of the start point on the opposite side of my course. Lift was not as good as forecast but I was soon finding 4-5 knots up and climbing to around 8,000 feet.

I did get a little up close and personal with an Air Tractor at 4000 feet. I was surprised to see him up there but he saw me and went around the thermal I was working.

There were several dust devils that helped mark the way across Kansas. Lift was strong and often really rough. I occasionally got brave enough to dive at a blistering 65-70 mph between thermals. I rounded Hays about 4:30, making sure to spend enough time on the opposite side of the airport to get a good trace over there, then headed back.  Things were starting to weaken and a big bunch of the sky had gone blue. I knew my only hope was to beeline straight home and figured I’d go as far as I could. Keeping a positive mental attitude helped a lot as it really looked doubtful that I’d get very far.

The flight home was characterized by long smooth glides followed by weak smooth thermals. I did get one good climb over a country airport about halfway home. That was my last of the 4 knot variety. After that it was 1-2 knots. A couple of turkey vultures marked a core for me at one point which was most appreciated. I had been using a bit of mental math and figuring my glide at about 25:1 as I flew in smooth evening air. My last good climb had been at 6 PM. Usually I’m on the ground by then. I kept finding these really weak, smooth thermals every 5 to 10 miles and was slowly closing the gap on the airport. It seemed like I might be able to actually make it. or at least there was a chance.

I left the last thermal 15 or 20 miles out. I was right on the edge of a 25:1 glide to the airport. Of course I had to go PAST the airport to finish the goal flight so I knew I needed a few more bumps to make it. As I got lower I started to fly like Dick Wolters in The Sunship Game, “field by field by field.” Well, unfortunately this tactic was going to require a change in tactic as all of the fields along my course within about 4 miles of the airport were full of full grown corn! I started to turn a bit east to try to approach the airport from the north but quickly realized that it was highly doubtful I was going to make the runway, let alone get a finish for the flight.

I was set up well as I was on an extended base leg to a private airport. I also had a few dirt fields around as options. I didn’t find any more bumps so I committed to the runway and turned final. Lo and behold, there is a Duster sitting next to the runway. Turns out my friend Jerry had landed there as well, not having quite enough lift to get back home. At least I’d have company.

All in all it was a great flight and I learned alot. Keep in mind that I’ve never flown a real out and return beyond maybe 20 miles from home and have never flown a declared goal flight.

I should’ve started earlier. I screwed around for a while after takeoff trying to find some great lift before I set out on course. Of course I didn’t want to land out immediately and waste the whole day. However I could’ve used those extra minutes at the end of the day.  I have a slow glider and have to take advantage of the entire day.

Turns out this flight was my second longest distance and my longest duration at a bit over 6.5 hours. Not too shabby!  Here is the OLC trace: http://www.onlinecontest.org/olc-2.0/gliding/flightinfo.html?flightId=1688698192

All I got were crummy cell phone pictures but here goes.

Proof that I almost made it: 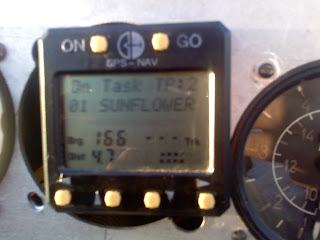 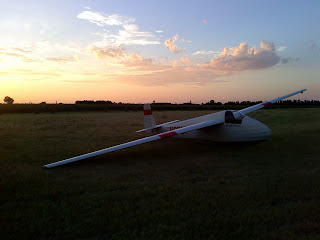 Here is the Cherokee and the Duster at Mills Field.  Nice end to a good day of flying. 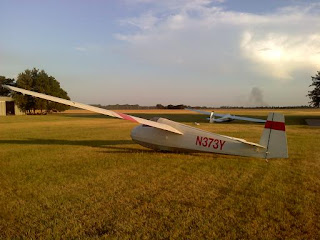